Arriving at Bryce Canyon in the Snow - Utah

Our friends Lee and Trace are on their way to stay with us and we will both leave tomorrow heading for Bryce, Utah.  One last night at Lone Rock. 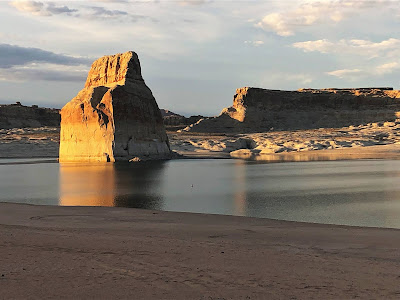 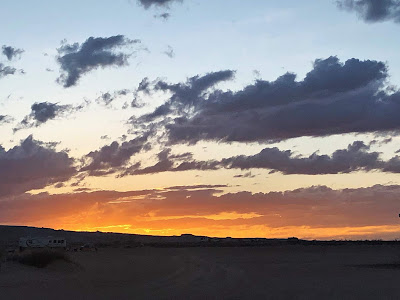 They arrive just before the sun starts to set.  Such a peaceful place to watch the sun go down. 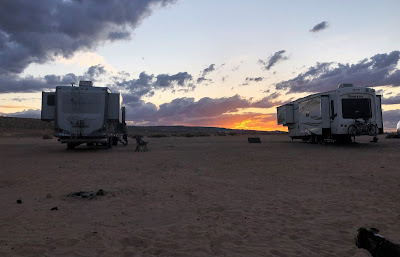 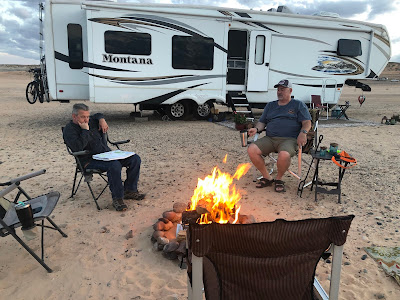 It was nice and calm so we enjoyed a nice campfire. 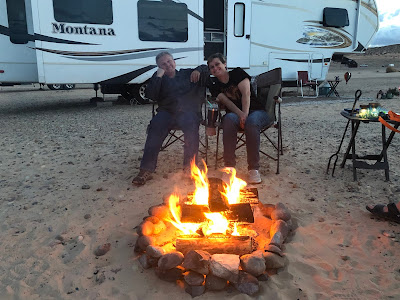 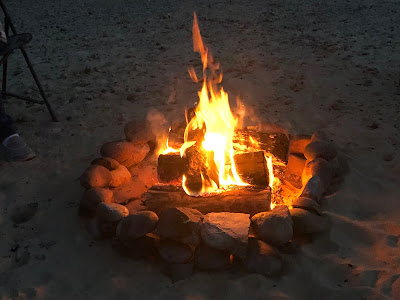 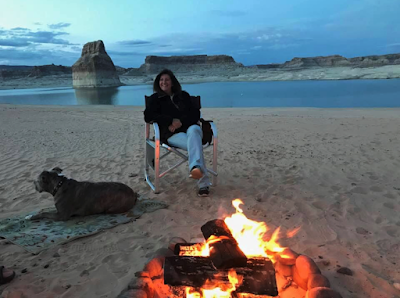 Hurley and I keeping warm.  Lee and Trace got a new dog, named Jack.  I didn't get a picture of him yet.  He's a cute little, squirmy bundle of energy though and very adorable! 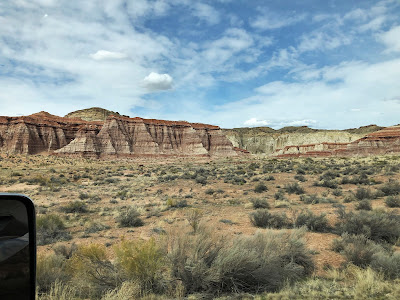 The next day we emptied tanks and filled up our fresh water as there is are no services up at Bryce due to the winter conditions.  Yikes.  There will still be some snow to deal with as we knew.  I hope it won't be too cold though. 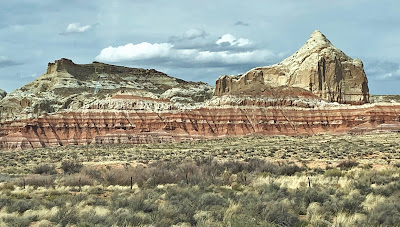 The scenery was very pretty along our route.  Lee and Trace headed out while we were dumping and we eventually caught up with them along the way when they pulled over for a bit. 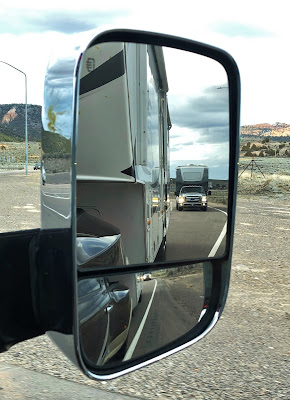 There they are in the side mirror behind us.  It was a pretty drive through the Kanab area and beyond. 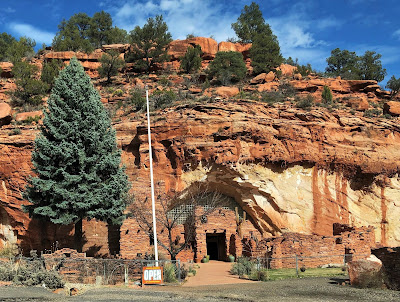 We passed by some unusual "homes' built into the mountain side.  I guess you are allowed to go in but we needed to keep going.  Very interesting though. 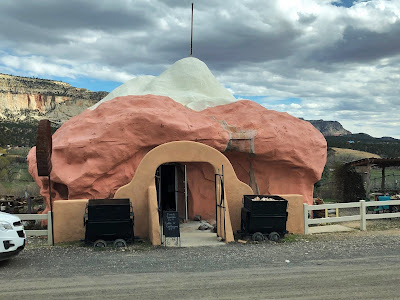 Not sure what this one is.  Maybe a cupcake or ice cream shop? 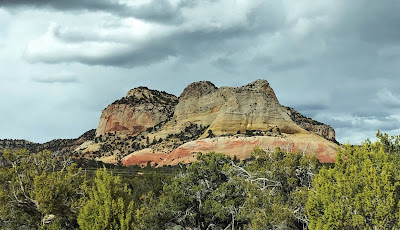 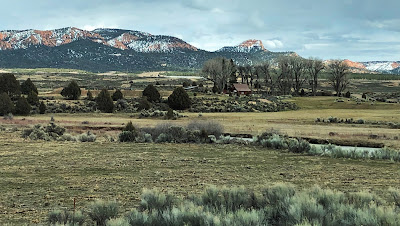 We drove 89 to 12 past fields and small towns.  We quickly began to see a bit of snow on top of those mountains.  We are at a pretty high elevation so no surprise.  Bryce sits at 9000 feet so we know we will have snow there. 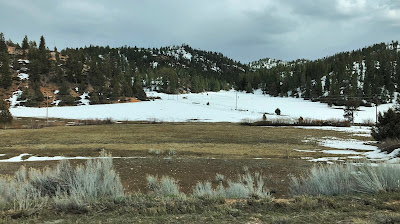 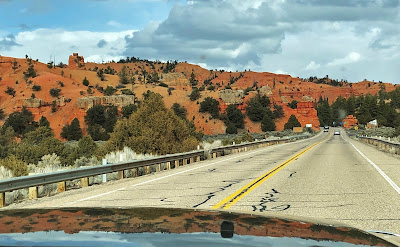 We are coming to the entrance to Red Canyon.  It sure is very red!  Just gorgeous.  A peek of what's to come.  We've been to Bryce before with the kids, but again, that was 20 years ago.  Looking forward to doing more hiking, but most of the trails are still closed due to snow.  So we'll see what we can do. 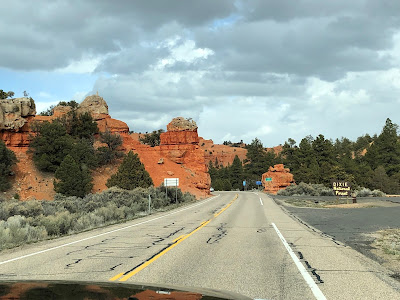 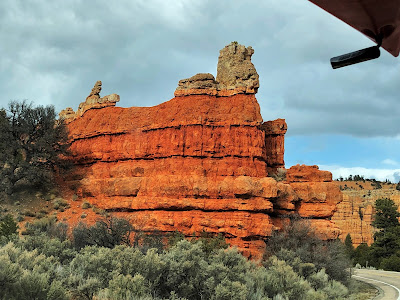 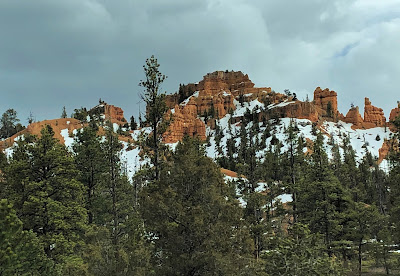 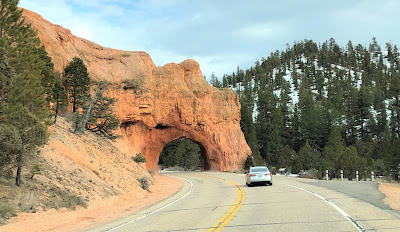 Two small tunnels to go through but no problem with the trailers. 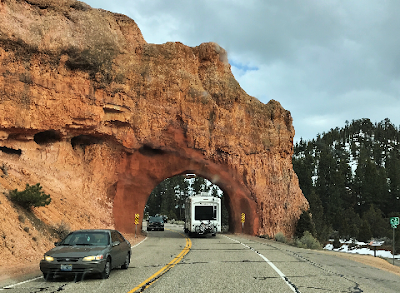 Trace took a pic of us going through the tunnel.  Plenty of room. 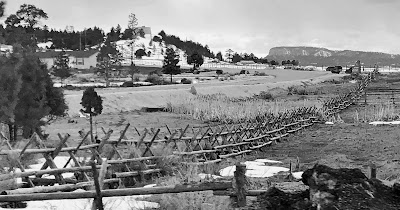 Driving through the small town of Bryce there are a couple of places to eat, get gas and propane and services (water/dump). 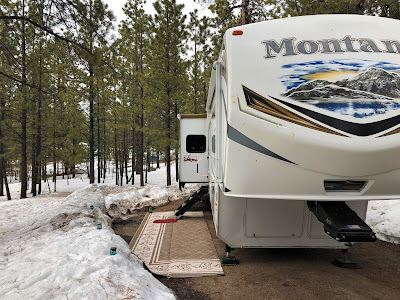 We were very surprised to see that the campground was mostly full!  Lucky for us there were two sites next to each other open that were big enough for us.  $30 a night seems high for no utilities, but hey, it's a national park and we are as close to the trails as you can get. 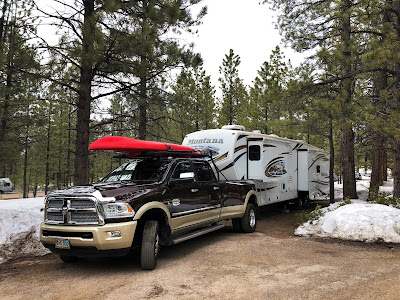 Still 3 feet or more of snow! 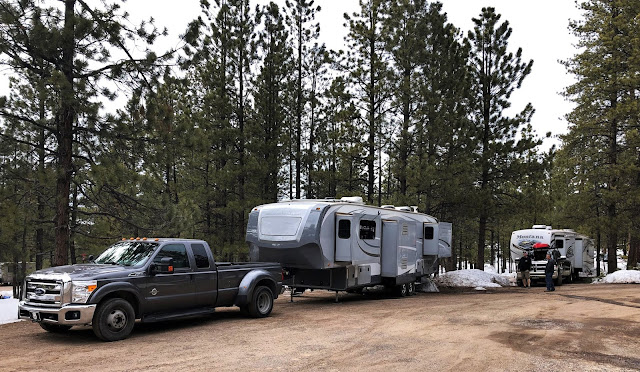 Lee and Trace and us in the site behind them. 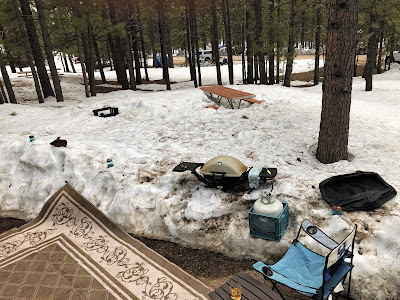 At first we were bummed that the fire pit and table were mostly covered with snow.  But once we realized the temps were in the 40s by evening and windy, we didn't care.  We just huddled inside.
The weather for the next couple of days was cold but sunny during the days so we have some nice hikes planned.