While we were home in Placerville at Easter, our local RV shop, Idle Wheels, had a party celebrating their 40th year in business.  Steve and my brother went over for the festivities and received a ticket for a raffle drawing.  Steve won the Grand Prize of $150 towards any purchase.  We had talked about the new step systems going on the newer rigs we saw at a recent RV Show.  We really thought they were cool.  They are more of a "ladder" that connects to the doorway and sits on the ground.  Very sturdy compared to the "hanging" steps that can have a lot of play and bounce.  Ours have gotten very saggy and we thought how nice it would be to have these.  They are pricey though.  About $400 for a 4-step system.  Since we could use the $150 towards the steps we ordered some. 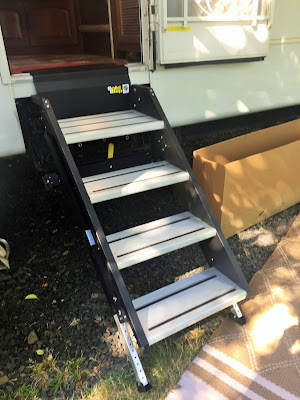 We chose the Lippert steps because they have a larger landing step at the top which is nice.
The step on the bottom had too much bounce and became unsafe. The original steps and the metal box that holds them in place are very heavy.  The new steps are much lighter and us RVers are always looking at ways to lighten our load.  They do make a box you can add in the original opening for added storage as well.  Of course not sure that saves you any weight but additional storage is always a plus too. Steve spent quite a bit of time measuring several openings to get the correct size.  The RV store seemed a little unsure about the measuring process and part number so Steve called Lippert directly to discuss the process and verify.  The narrowest opening in our door frame is 28 inches and that is what Lippert told him to order.  Makes perfect sense, right?

There was a long backorder and we had to leave in April without the steps. They'd be sent to my brothers house and since my niece would be coming up to a wedding in Portland, she would bring them up to us. The date kept getting pushed back due to such high interest (according to Lippert) and this is where things started to go downhill.  The steps finally did come in and we picked them up from my niece in Portland in July.  We were so excited for Steve to install them.

Once we started to install them we were very disappointed to see that the step treads were only 20 inches wide, which is narrower than our 24 inch original steps. That's quite a bit.  They certainly don't fill up the original space like we expected. We talked to others with them and they should be wider. 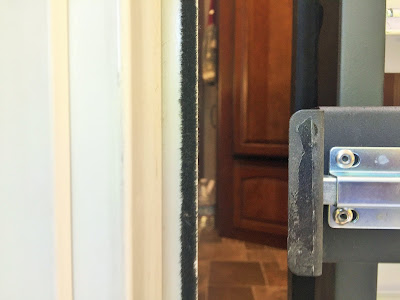 The next thing we noticed was that the latch assembly didn't reach the 28 inch door opening as the latch was only 26 inches wide (see above picture). So Steve called Lippert to ask about this as we assumed we received the wrong steps? They do make a 26 inch set as well. We were shocked when Lippert confirmed that we did get the correct 28 inch model, and that the latch on that model is only 26 inches wide, WTH! They agreed it was very confusing, and causing them issues with Customer Satisfaction. They told us that if we had a 28 inch opening we should have ordered the 30 inch model(another WTH came to mind) Lippert said to return them via a freight company (at our expense) as they are too large to ship UPS. They noted that once they received them it would be close to 8 weeks for them to ship us the correct 30 inch set (as they are also in high and backordered).  Steve asked what the differences were in the 30 inch vs the 28. They noted only the latch assembly was wider, and that the steps were all the same with 20 inch treads. So we asked them to ship us a new latch plate and we'd install it instead of returning the whole step assembly. They thought that was a great idea and shipped us the latch plate free. The part came in within a week, and Steve went to install it. The old latch was held in with 12 rivets and removing them on the road was a royal pain! Luckily we were with Lee and Trace and they had some files we could use.  We got them out and bought screws and nuts to replace them. When Steve went to install the new latch plate he found the mounting holes were too far apart to fit on our steps. Again, WTH! So another call to Lippert and they confirmed the 30 inch model was a wider step assembly with 24 inch treads. They couldn't understand why a tech rep in their company wouldn't know that and assume the steps were all the same? So Steve decided to just drill new holes in the latch assembly and mount the new latch assembly. Now our steps are installed and working fine. We are annoyed that our treads are only 20 inches wide, instead of the 24 inches they should be, but we were just sick of dealing with all the BS and delays and decided to suck it up and make due.  You can't help be annoyed though after purchasing a $400 product. 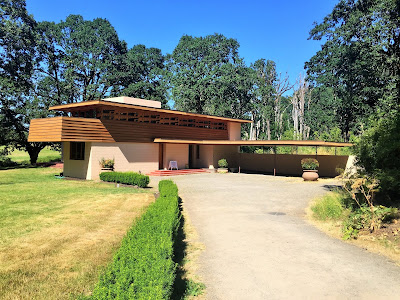 We knew there was a Frank Lloyd Wright house was in nearby Silverton so we decided to take a look.  They also had some outdoor gardens we thought we'd take a look at it.  Of course we missed the last tour.  I'd have to say after seeing other homes he's designed, this one was somewhat disappointing. 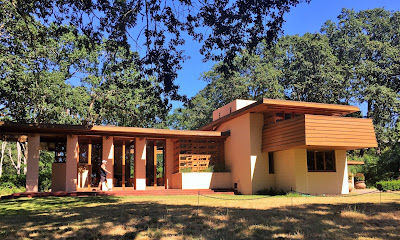 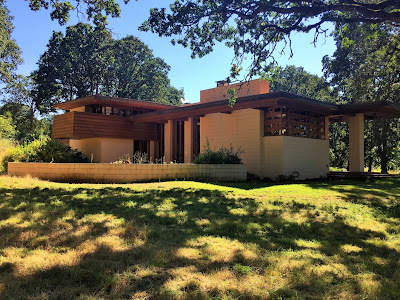 The gardens were very expensive and it was still pretty hot out so we drove on to see some other sights nearby.  The Marion Gallon House Covered Bridge had some interesting history. 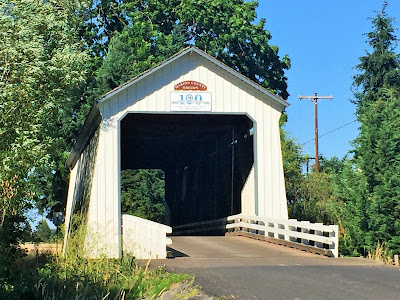 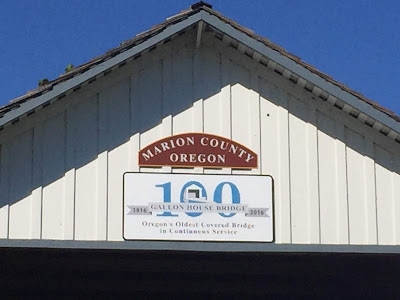 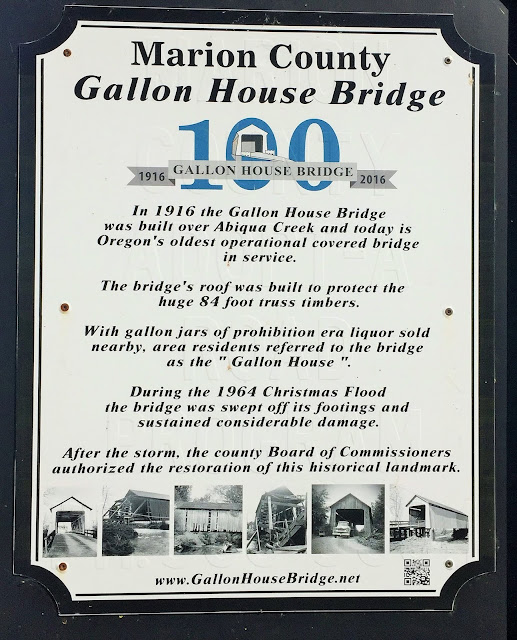 We enjoyed driving around the and saw some hop fields and more wheat. 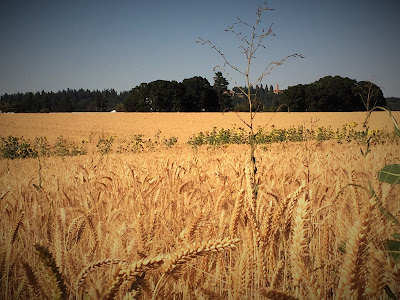 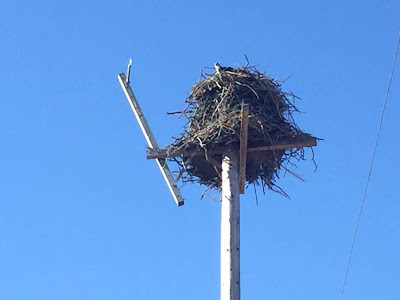 There was an Osprey nest in one of the fields and we took a couple of pictures and a short video.
An osprey landing in the nest. 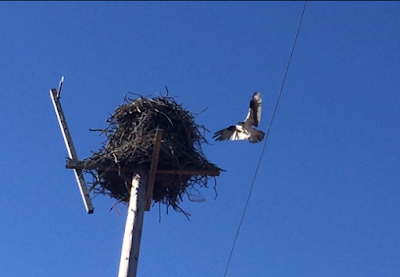 We didn't want to bother Momma so we drove on to the cutest German town called Mt. Angel.   Founded in the late 1800s by German settlers, this town has many Bavarian style storefronts and the beautiful Benedictine Abbey. They celebrate their German heritage each year during the Oktoberfest. 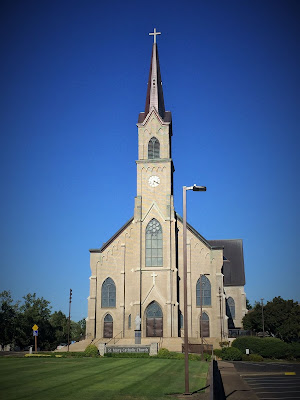 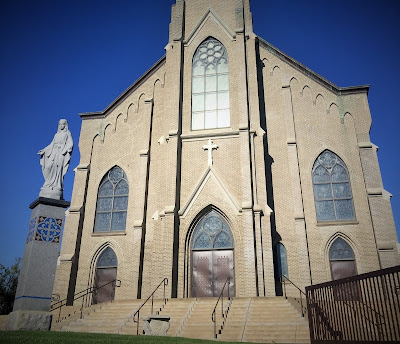 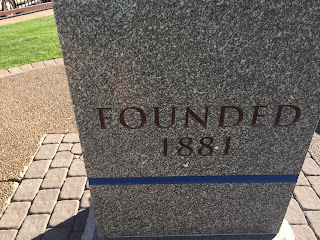 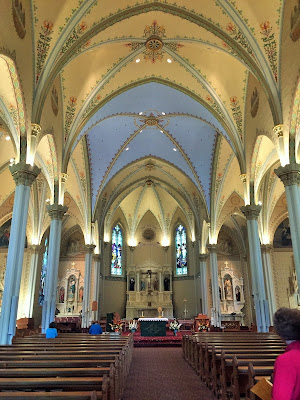 I love to see the craftsmanship in the old churches and the beautiful stained glass. 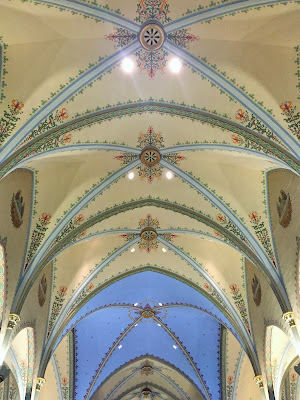 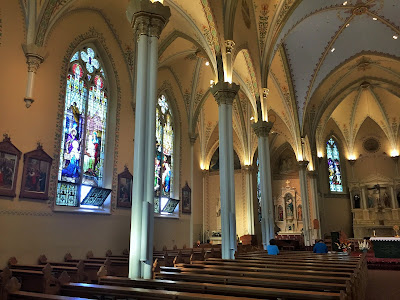 I wish we had more time to spend in this adorable town.  It was late on Sunday so most shops were closed.
We'll be moving back to the coast tomorrow with cooler temperatures.
Posted by DebbieM