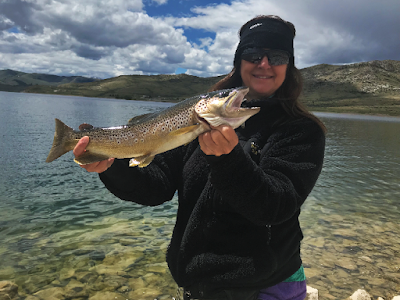 (teaser pic!)
The next few days were projected to be cold and stormy but we had high hopes for the fishing!  The drive was short and the scenery breathtaking as usual for this part of Montana. 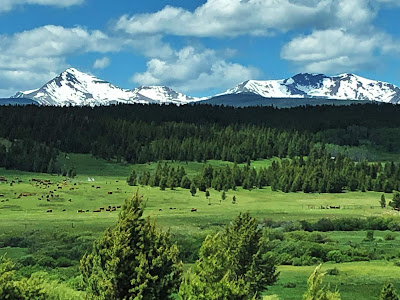 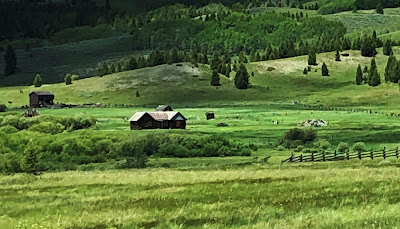 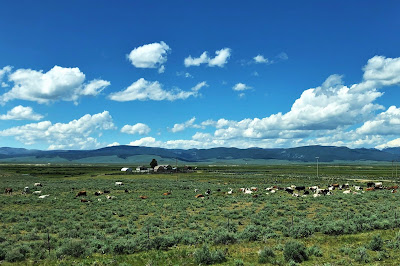 We passed a few ranches and farms as we meandered through the valleys between mountain ranges. 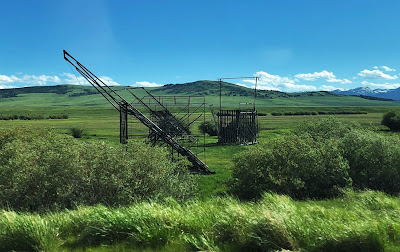 There were many of these old contraptions made of wood. I'm sure they were to help with hay baling back in the day. 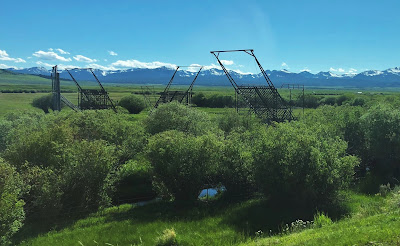 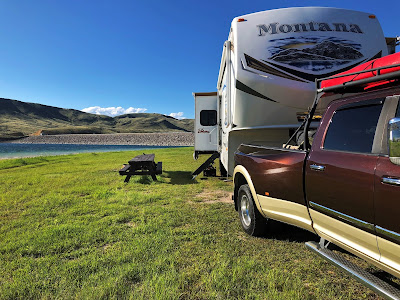 We soon arrived at our site at Clark Canyon Reservoir.  It's a very nice FREE campground run by the BLM.  There are many sits that are lakeside.  Mostly developed and a few in the grass.  Most have gazebos and firepits.  Central water and bathrooms.  No dump but you can use one across the lake for $5 that also has fresh water.  It was pretty full when we pulled in but there was a large group moving the next day.  We grabbed one on the grass and moved to two side by sites the next day. 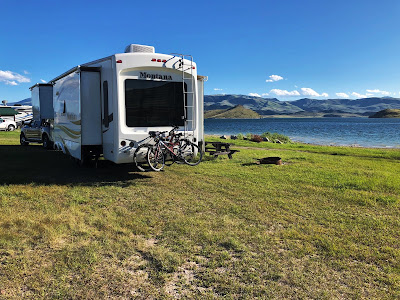 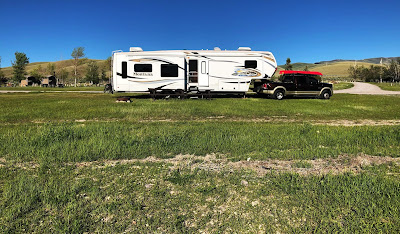 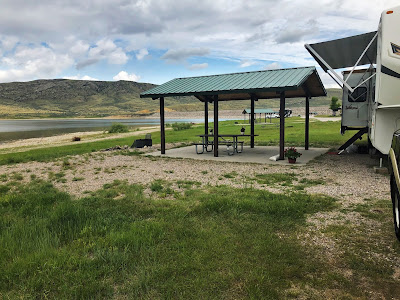 This was our site the next day with a nice gazebo, table and fire pit. 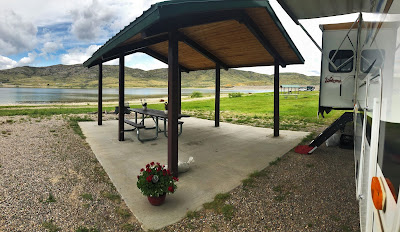 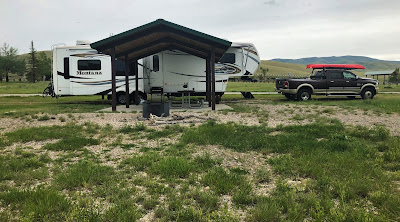 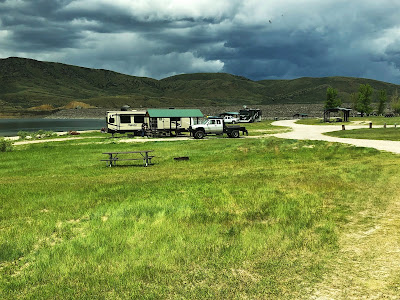 My brother's site next to us.  These spots are nicely spaced out. 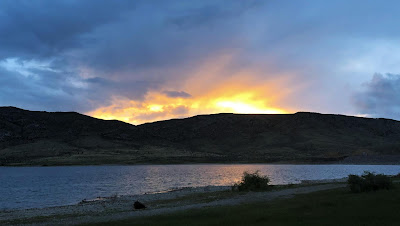 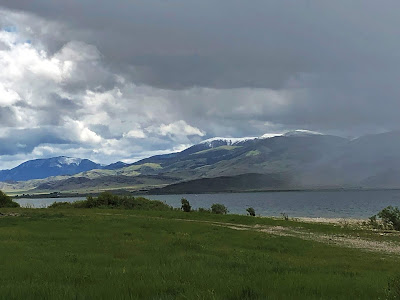 The next day was stormy so I was just going to stay in and work on catching up on my blog.  (ha, I'm still SO behind!)  Then I get a knock on our window and my brother holds up this huge trout.  Well, so much for the blog.  I grabbed my pole and we headed out.  He caught it off the dam.  Before we headed back over he cleaned and bagged it for dinner later.  We've always cut the stomach open to see what the fish are feeding on. 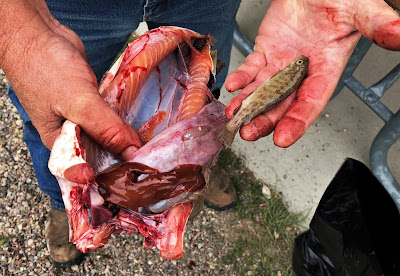 Sorry for the gross-ness, but look at the SIZE of the "minnow" this guy had in his gut! Guess we're going to use bigger Kastmasters!

As you can tell it was cold and windy but that didn't slow down the fishing!  Look at my monster!  We caught several nice 3, 4 and 5 pounders!  All German Browns.  This seems to be the norm out here.  We expected more Rainbows and less Browns but it was the other way around. 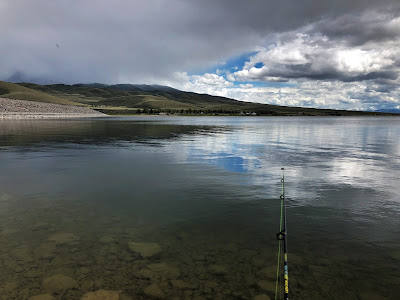 Now and then it would get nice and calm and we'd peel the layers off just to put them back on a few minutes later. 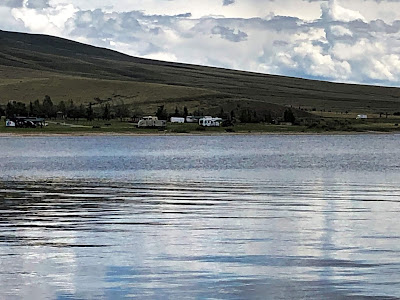 Looking back at our trailers. 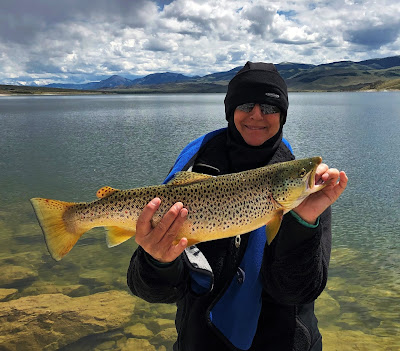 Another beauty for me!  We released all of them except for a few that didn't make it.  Those turned into fish fillets, fish tacos and fish sandwiches over the next few days. 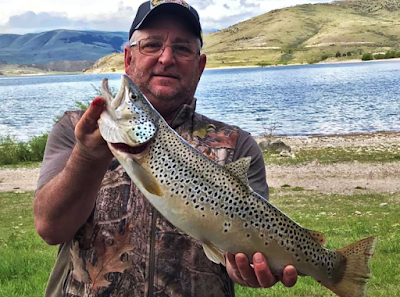 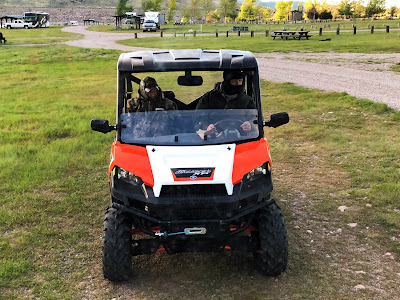 Later "The Steves" bundled up and took a ride around the lake to scope out more fishing spots.  They found a few but the dam was definitely the ticket.  Great way to start off our time here.  We have a river to fish later, some backcountry roads to explore and a ghost town.
Stay tuned!
Posted by DebbieM