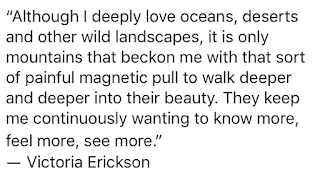 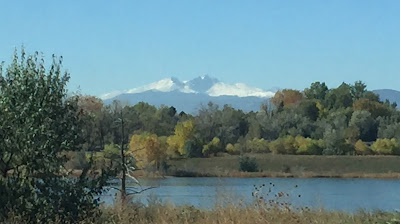 My heart was very happy as we drove south on I-25 and the mountains of the Front Range came into view.  Beautiful, snow capped mountains.  Ahh, mountains!  We have not seen mountains for some time! 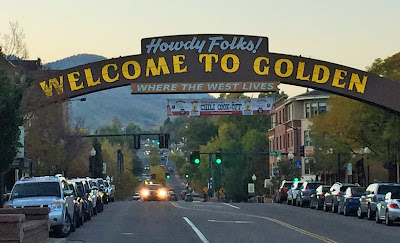 We were stopping here for a few days to spend some time with Greg & Cori of The Restless Youngs. 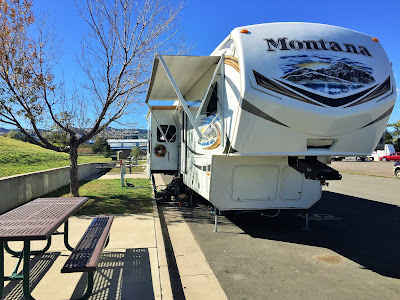 There are not too many reasonably priced campgrounds in Golden that had openings.  We were lucky to get a spot at the Jefferson County Fairgrounds for $35!  Very tight parking but we had a decent spot pulled up alongside a grassy hill.  We got set up and then headed a few miles away to where Greg & Cori were.  They had made Tri-tip for us that Greg had cooking all day in his new smoker.  I think Steve had a little grill-envy. 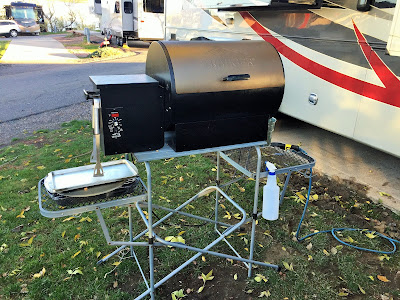 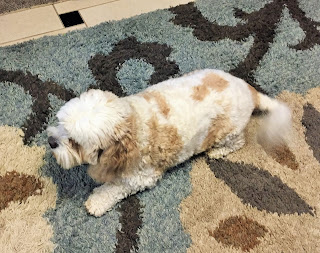 Of course Hobie was looking cute and fluffy as always! 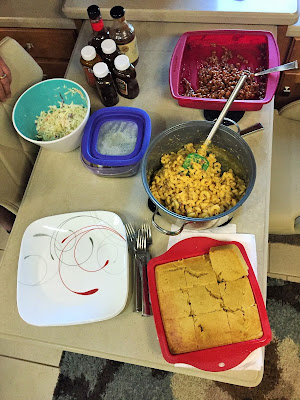 Cori made cornbread, mac & cheese, beans and cole slaw. What a feast after driving.  We had last seen them in April on my birthday in Arizona. We've been lucky to cross paths a couple of times a year. 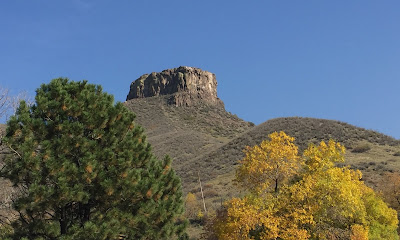 Castle Rock in the South Table Mountains.  As soon as we drove in to Golden and I saw this I knew we had to hike it later.  We talked the rest of the evening and then went back to our trailer.  We'd be taking a tour of the Coors Brewery tomorrow. 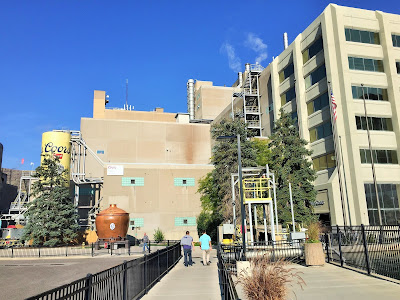 The Coors Brewery in Golden is the largest single-site brewery in the world. It's located just west of Denver and still stands on the same ground where Mr. Coors opened it in 1873. 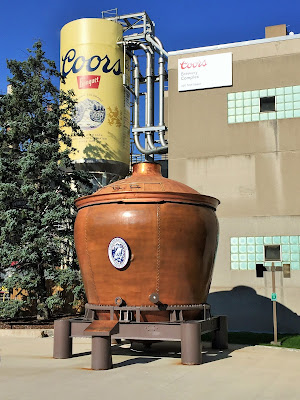 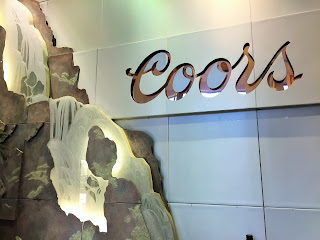 It's actually called MillerCoors now. They brew Millers, Coors, Hamm's, Blue Moon and Leinenkugel among many others. 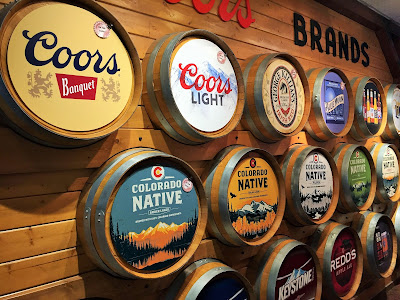 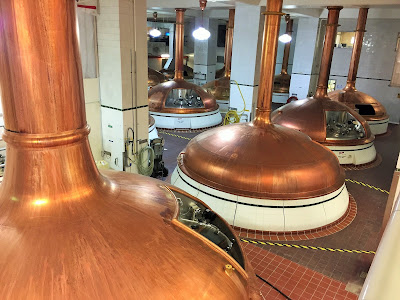 So many large copper tanks in this building. 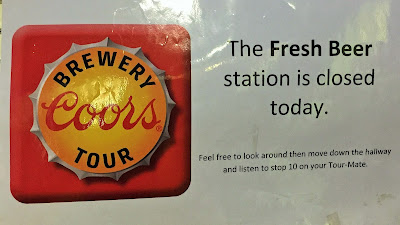 What?  No fresh beer tasting?  Not to worry.  We each received free tickets to taste down in the tasting room. 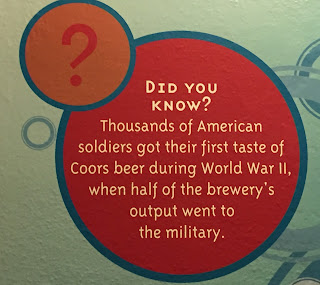 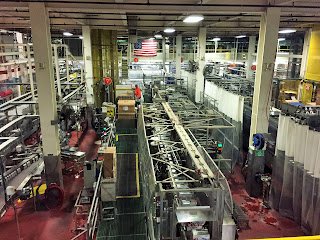 I always enjoy the packing section.  Here the Keystone brand was whizzing by on layered belts. 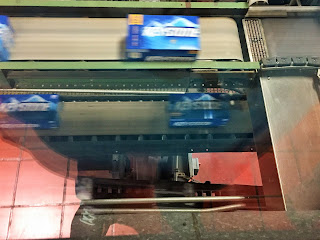 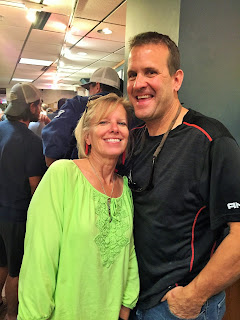 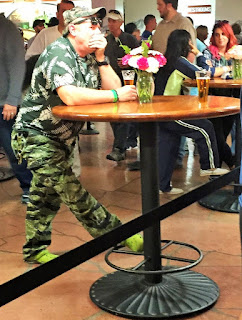 This guy is serious about his camo.  Green Croc's too, nice touch.  What was funny was that we saw him the next day at the Chili Cook Off and he was sporting the exact same outfit! 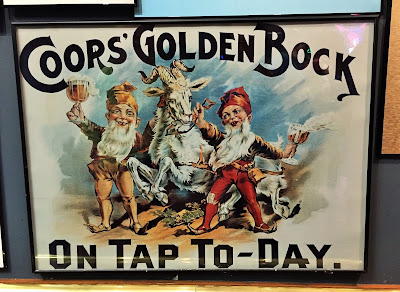 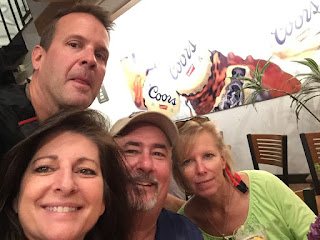 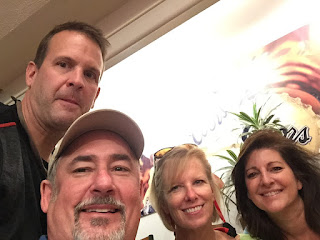 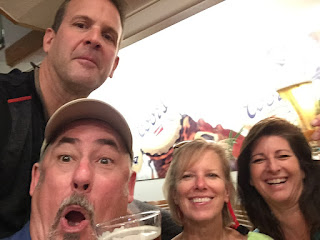 I had a Pepsi but really wanted a margarita.  So we walked through the cute downtown and found a place that was having a Happy Hour special.  I forgot the name of the place but Cori may remember? 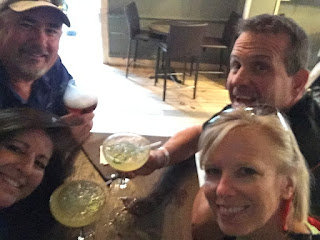 There's Greg's smile!
Steve likes a drink called an Old Fashioned.  It's made with Whiskey or Bourbon, bitters, 1 Sugar cube, a few dashes plain water and garnished with a slice of orange and a cocktail cherry. BUT, this is no ordinary Old Fashioned.  This one is made with SMOKE.  Pretty cool and Steve loved it.  Pretty neat to watch too!  We also had a great dinner out but I forgot the name of that place too.