We crossed through the northeastern part of New Mexico and had some of the best tacos EVER at a food truck in the tiny town of Clayton before crossing the border into Oklahoma.  I'm so glad we stopped.  We still had a while to drive and we hadn't had lunch yet.  We each had a pork, chicken and beef taco.  Wow were they tasty!  The seasoned beef and the sauces for each were delicious! 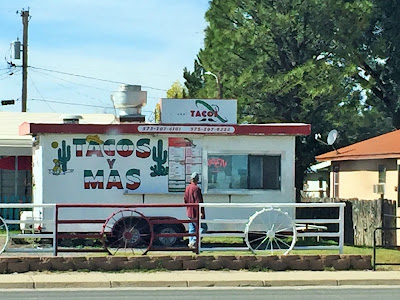 Our 28th and final High Point was to be in the panhandle of Oklahoma. Funny how I can't even think "Oklahoma" without singing the song in my head from the Rogers and Hammerstein musical.  The part where they sing, "Ooooooklahoma where the wind comes sweeping down the plains".  Ya know, that part?  I used to love watching old black and white movies when I was a little kid. Annnyways... 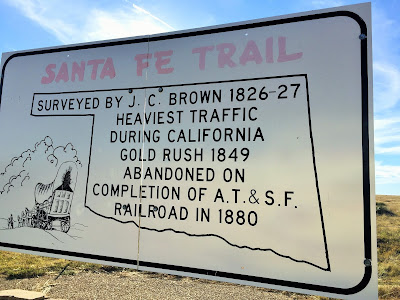 We found ourselves on the Santa Fe Trail as we drove.  Not much out here but a couple of interesting markers where there just happened to be some geocaches.  Nice. 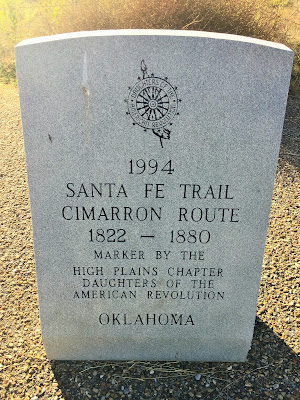 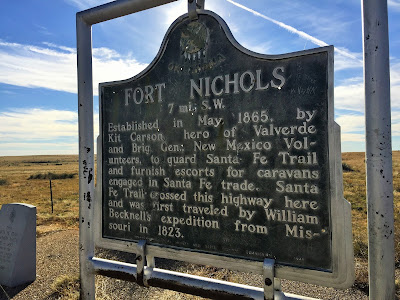 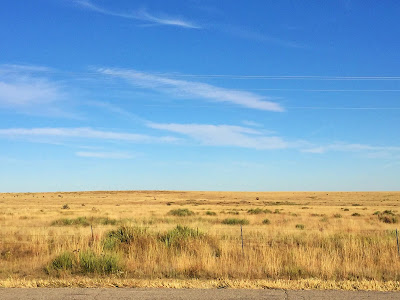 We expected more flat but couldn't imagine how the high point could be almost 5000 ft.  We found out it didn't have much gain but would be a 8 1/2 mile hike.  A fairly easy, long hike.  Nice way to end our High Point adventures for the year. 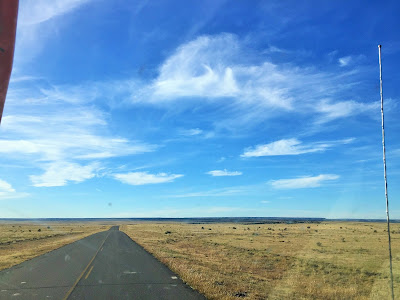 After some time we wondered where this state park could be.  Finally, after driving through a lot of grazing land and over cattle guards we arrived at Black Mesa State Park. 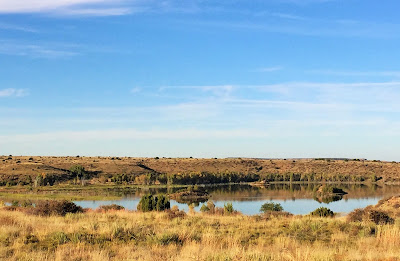 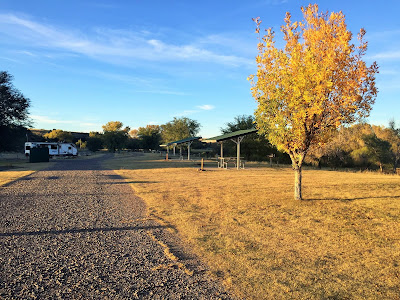 Almost no one here except some seasonal workers at nearby oil rigs.  The campground was pretty nice with water and electric and shaded picnic tables.  Since they hadn't had much rain as of yet, things were pretty dry. 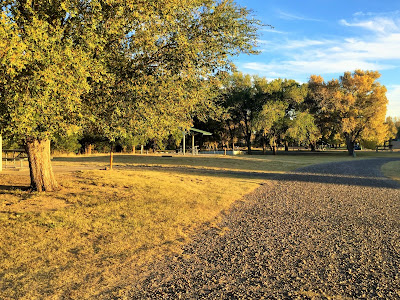 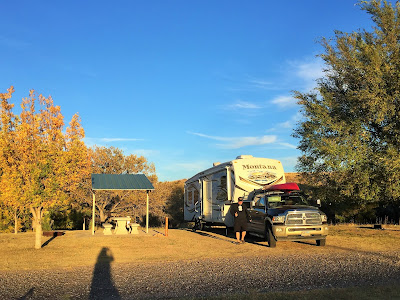 Our spot, #12.  Easy back in.
We figured we'd be up early to hike the high point but it was not meant to bee.  Yes, I meant bee.  What we found since we arrived in that tiny town of Clayton back in New Mexico was that there was a crazy amount of flies and wasps out.  I mean all over.  As soon as we stopped the truck, they would land all over it.  (That's why Steve went to get the tacos while I waited in the truck) And they continued on all through our drive in Oklahoma.  Besides being freaked out by it, I was wondering why they'd be out here?  I mean there was nothing but dirt fields and telephone poles.  Why would they be here?  You could see them on every pole or sign.  Really gross!  When we checked in at the campground we asked about that and they didn't know either.  Maybe the drought?  There were also a ton of mosquitoes.  So as we talked about the 1 hour drive to get to the trailhead and me thinking I wasn't so keen on an 8 1/2 mile hike sharing the trail with wasps, I changed my mind.  No way I was in the mood.  Not feeling it.  I was bummed we'd be missing our last high point, and one I was really looking forward to, but I knew I just couldn't do it.  Steve was very understanding. Ah, well.  So close but no cigar.  So we left the next morning.  Plus side, it looked like we'd pass that same food truck again just in time for lunch! 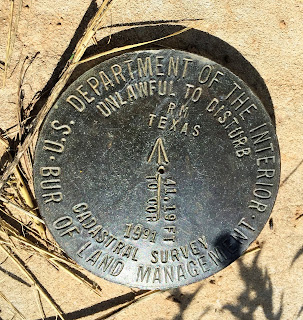 Another geocache marking the border of Texas with Oklahoma. 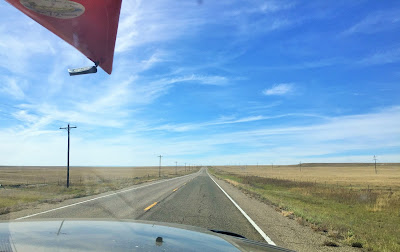 
It wasn't long before we arrived in Las Vegas.  New Mexico that is.  Storrie Lake State Park is in a declining state, but allowed you to park alongside the lake whereever you wanted for $8 (primitive camping).  We found a level spot where we had great Verizon service. 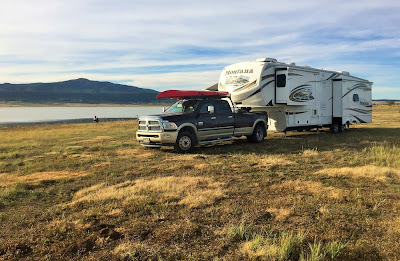 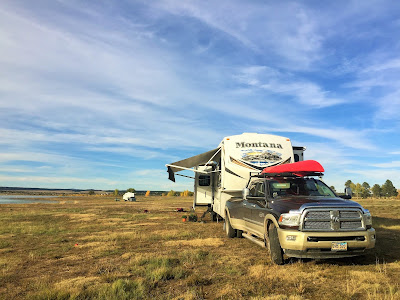 We didn't even unhitch.  Steve had another great office view. 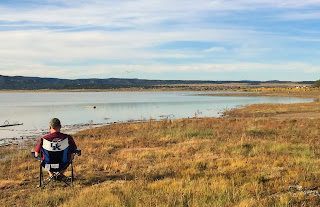 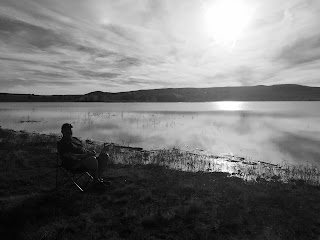 During our campfire we did have a scary incident.  Hurley usually lays on his rug next to the fire, happily chewing/destroying his toy.  All of a sudden he took off!  I figured he saw a rabbit and called him back.  Strange though, he ignored me.  I started to walk after him in case he ran towards the trailer parked down from us as they had a dog too.  Then as I pointed my flashlight at him I saw two sets of eyes running playfully towards me.  Turns out it wasn't the neighbor's dog.  Steve got a glimpse of it and it was a coyote!  We had heard how they send a bait coyote out to "play" with a dog and coax it away where many others were waiting to overpower it.  Good thing Hurley came back to me once I got closer!  Enough excitement for the day.  We watched a lovely sunset and finished our fire.  Tomorrow we'd be on the far west side of New Mexico to visit the Acoma Indian Village built on a high plateau. We had missed it last year and really wanted to see it. 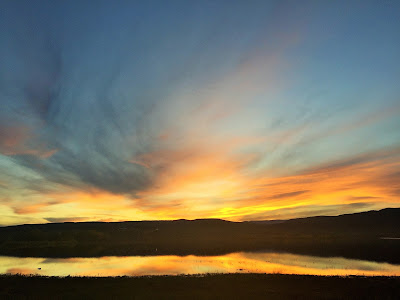