Wow did we find a gem of a campground!  Spring Creek has a park like setting (it is a park after all), electric, water, wifi AND sewer.  FREE.  Just outside of the town of Tomball, which is just NW of Houston.  There are some short trails, sports courts, playground, historic areas, showers and it's quiet as well. Did I mention it's FREE?  What's the downside you say?  Well, nothing really.  There are 8 paved, level RV sites that will hold 40+ length RVs with grass between them.  A few trees.  The only thing we could come up with that could be negatives, are a couple of sites are close together.  Had someone parked next to us on one side and they had slides, we probably would only have a few feet between us.  The sites on the ends and a couple of others are the best as they have much more space.  There were only 3 of us there and we were spaced out.  They will take reservations and there is a 14 day limit.  The other thing that could be a problem for some is that there is a fence completely surrounding the park and the gates are closed and locked between 10p - 6a.  No code.  You're in or you're out.  There is an emergency phone or 911 you can dial if you need it.  There is also shopping, gas, propane and plenty of restaurants nearby.  Great cell, AT&T and Verizon mifi.  Dogs are welcome. 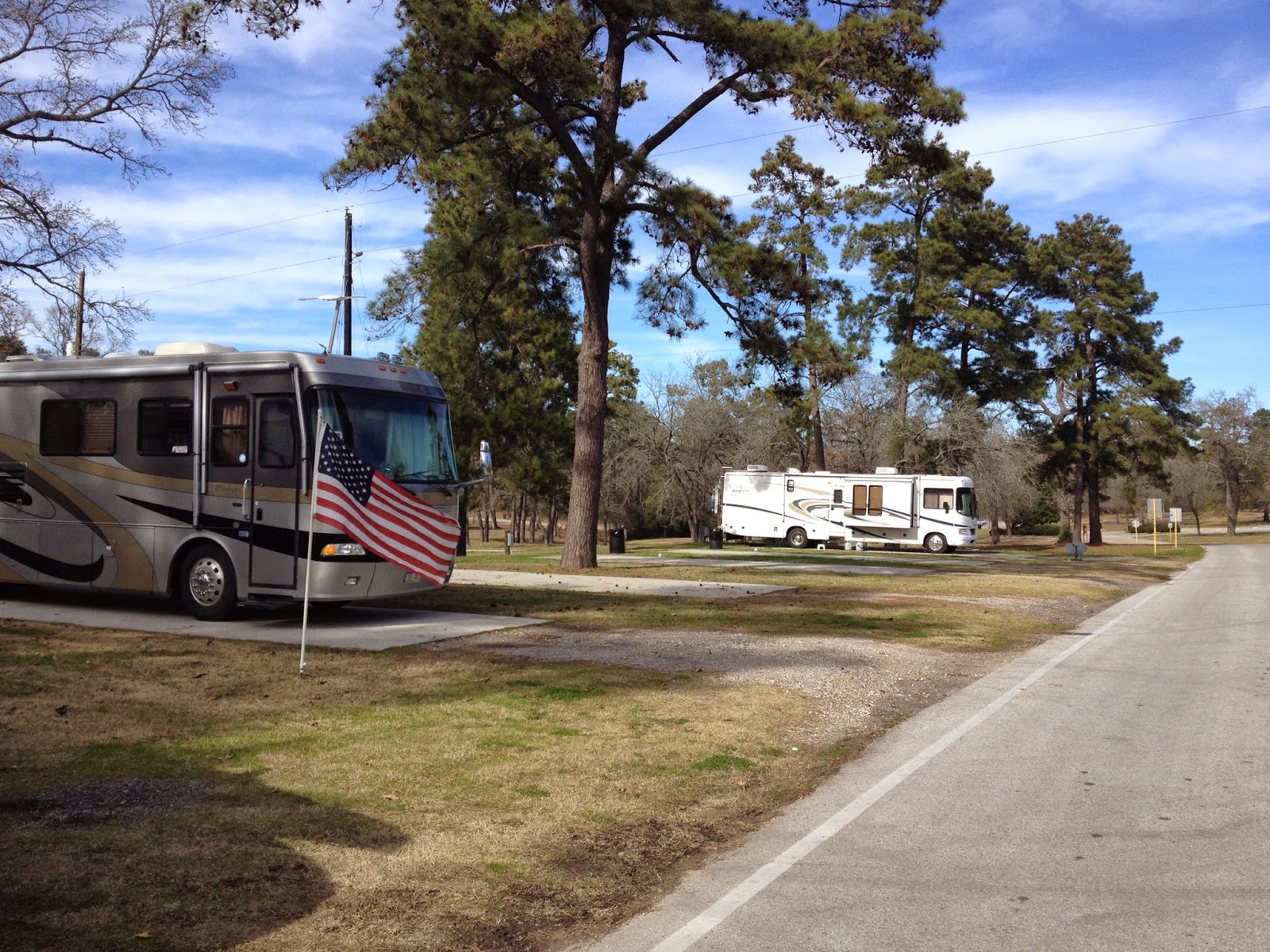 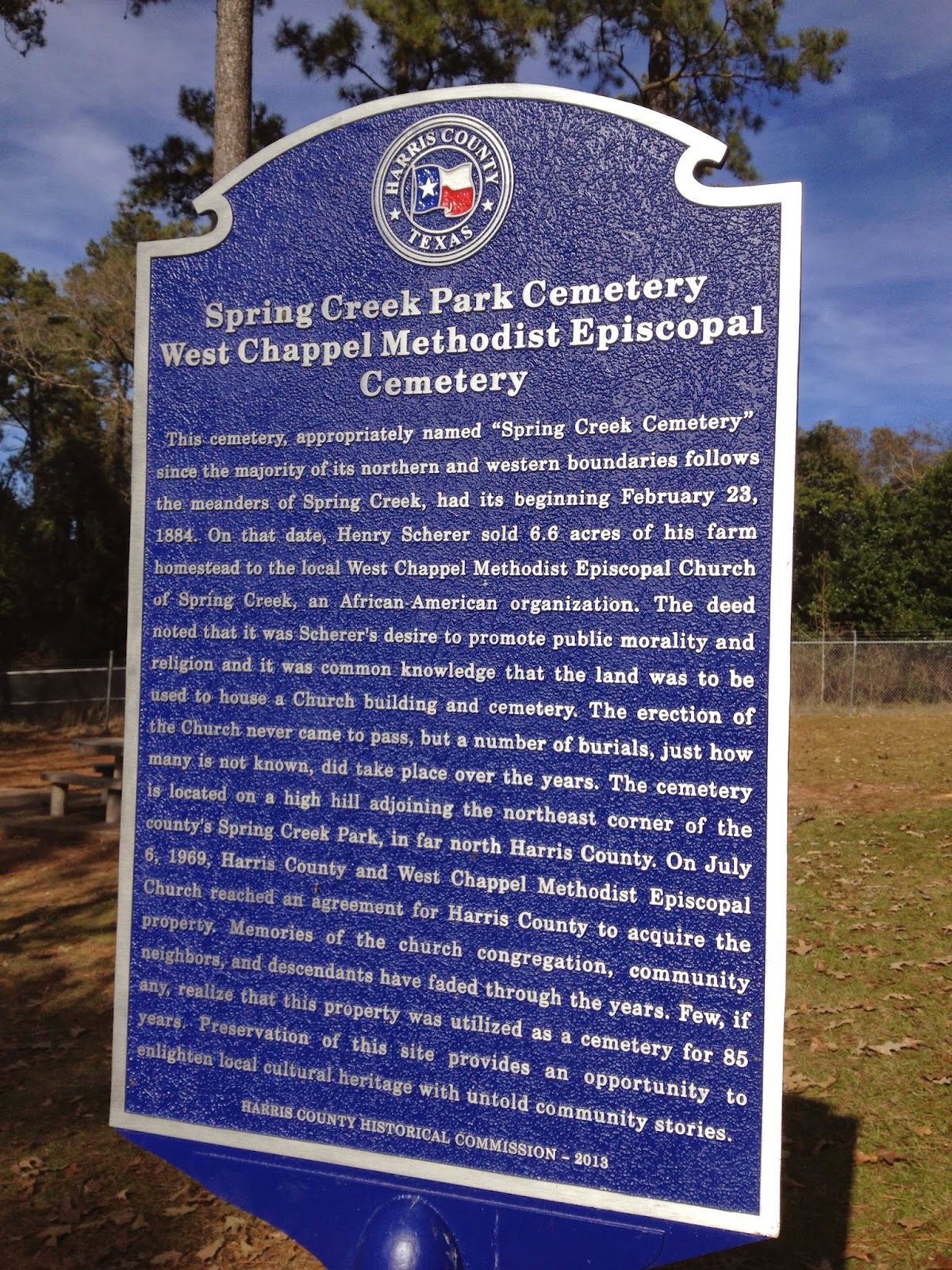 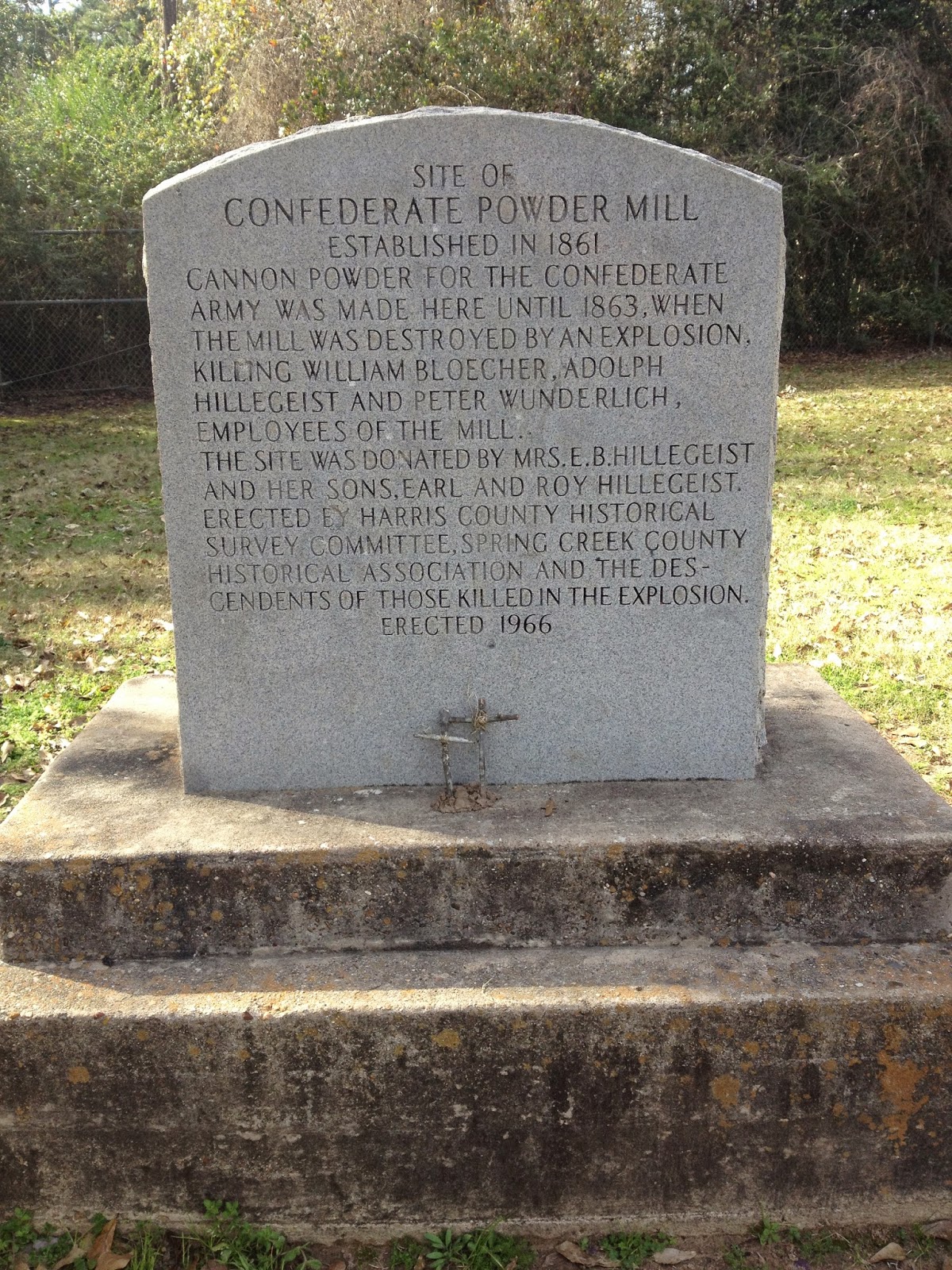 This historical marker has been added in Spring Creek Park to commemorate the recent discovery of a pre-Civil War cemetery that might contain the graves of freed slaves and other early Tomball-area settlers.  It is fenced off and protected while historians and archaeologists remove trees and brush that have covered the site since the last burial there in 1935. Historians believe the site was first used as a cemetery as early as 1828.  I have always had an interest in old cemeteries and genealogy.  I wish I could've gone into the cemetery but it is still closed off.  You can't even see it from the fence.
While I was reading this marker, an older gentlemen joined me and told me other stories of the area.  The marker on the right is to memorialize those killed when an explosion happened at the powder mill.
He also told me about the nearby pond (now fenced off) and all the strange drownings.  A later google search found this info about it. (in part)
In 1864 a horrific explosion destroyed the facility killing three men working there. The force of the blast was so great that a huge crater was created that over time filled with water and became a popular swimming hole for locals. Despite rumors of spirits at the pond and in the surrounding woods, the lure of the cool dark water continued to draw swimmers to the powder mill site willing to risk a ghostly encounter for a quick dip. Unfortunately for some that decision ended in their death. After several curious drownings the powder mill pond was fenced, but the rumors remain even today. 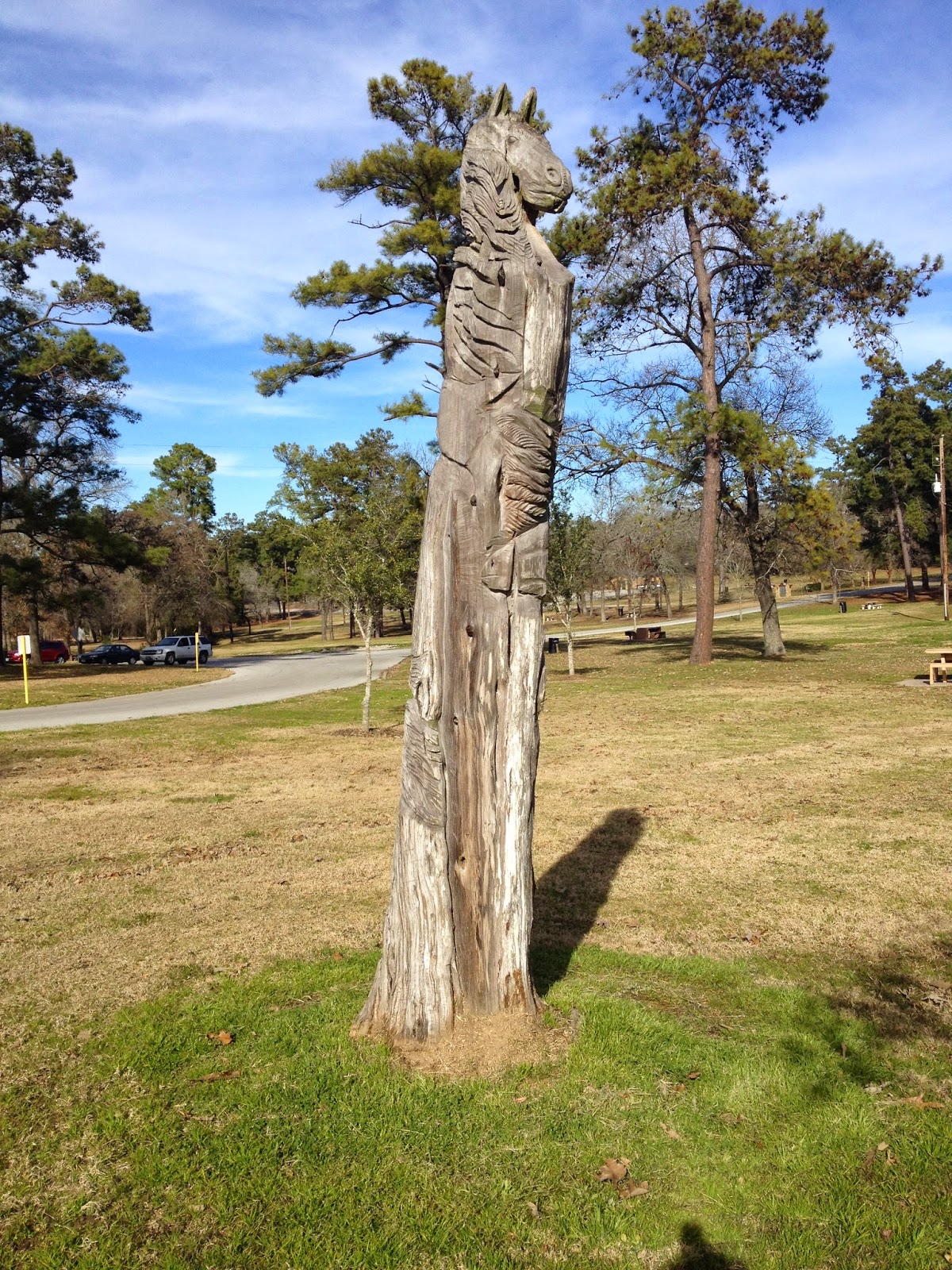 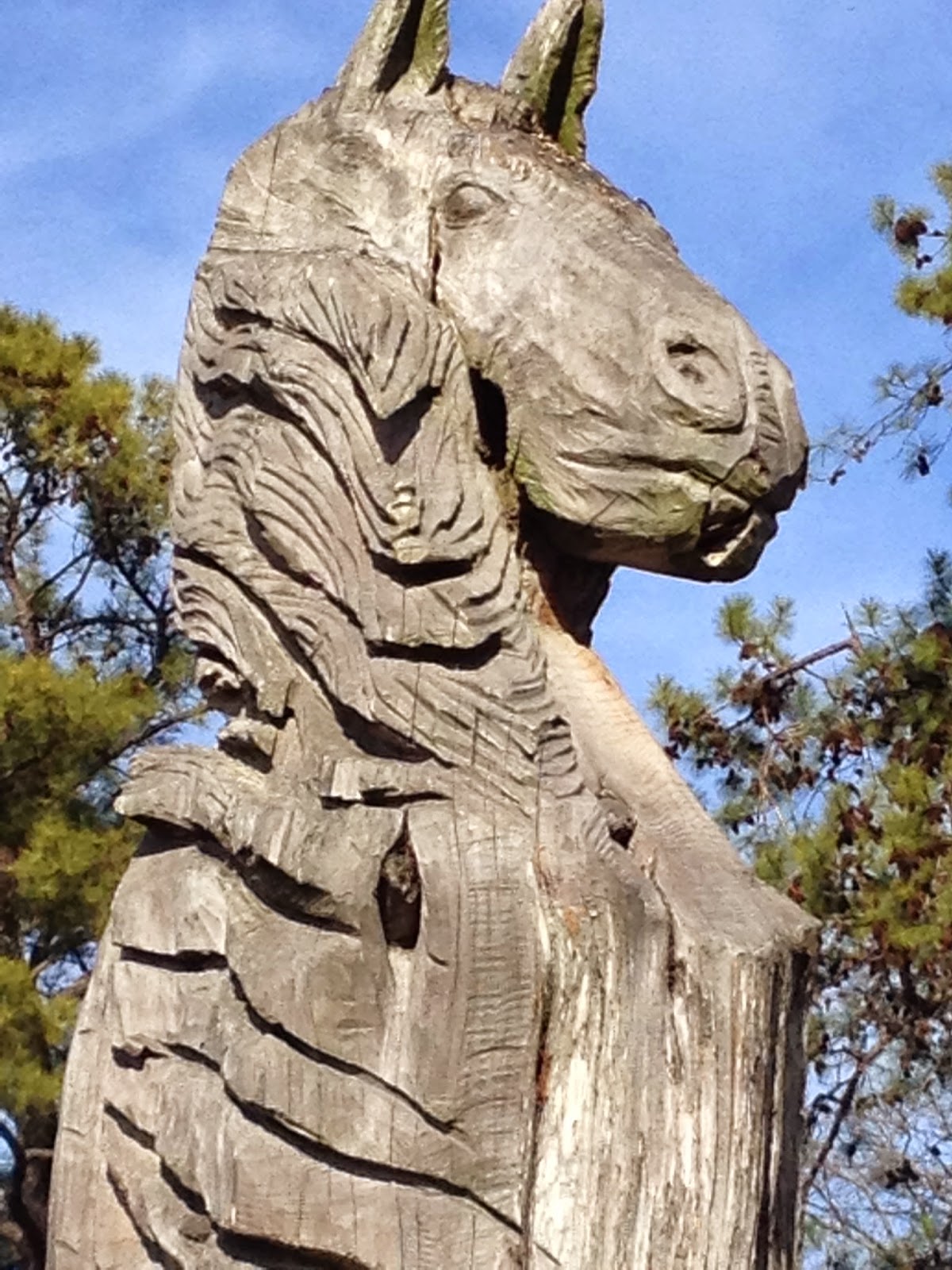 One of the trees cut down at the park was carved into a horse type totem pole.
We had a nice time at this park relaxing and exploring.  The best part was getting to meet up with fellow bloggers Mike & Sandy of Phannie & Mae.  Since they knew the area well, we met up at a Mexican restaurant they've enjoyed  before called El Palenque.  After weeks of delicious seafood, we were ready for some great Mexican food.  We were all happy with our meals and it was wonderful to meet Mike & Sandy.  They are as adorable in person as they sound on their blog.  They are part-timers who still have their house and travel many weeks at a time.  Some of it to visit with their two grandkids.  Mike is a retired airline pilot and Federal Aviation Administrator.  Sandy is a retired School Teacher.

While we would've loved to continue our stay at Spring Creek a few more days, we needed to move because we would be attending a late night concert and knew we wouldn't be back before the gates locked.  So we moved to Cagle Rec Area on Lake Conroe where we could do some kayaking also.

The campground is easy to get to and get in.  No problem for 40' rigs.  Spots in the loop closer to the lake have a nice water view.  We were in site #34.  Not the most level, but we were able to level the 5er.  Water, 50amp and sewer.  Campground and sites are well maintained and very clean.

It sounded like a good idea...
Friday was beautiful and sunny so we wanted to get on the lake for some kayaking.  Funny story. The lakeshore near our site wasn't going to be the easiest to launch from, but we didn't want to have to drive to the boat launch.  There was about a 2 foot drop from the water to the bank making it a bit awkward for Steve to get into.  The bank was covered with dried grass.  After a few discussion on how best to launch, our plan involved Steve getting in and letting gravity do its thing.  As the kayak was sliding into the lake (about 15 feet or so) I tried to hold onto the back to slow it down.  Well, the grass was slippery and I wasn't able to hold on for too long.  The kayak sped up a bit and as it glided into the water it bumped a couple of roots at the last minute causing the front end to dive into the water and quickly roll to the right.  Yep.  It dumped Steve right out.  Good thing it only turned out to be 1 foot deep.  Steve was soaked and I was trying not to laugh (too loudly).  After he quickly rescued his beer, he tossed up our jackets and gear.  Of course, both our cell phones were in our jackets, so unfortunately there are no pictures to go with the story.  According to Steve it was a near-death experience much like this:

but I thought it was more like this:
While we were not happy about the phones (Steve just got a new one) we both laughed uncontrollably!  We went to the trailer so Steve could change clothes and put the phones into rice to let them sit for a couple days.  Back to the kayak.  Since Steve now knew the water was quite shallow he just walked into the lake and got into the kayak.  We had a couple of nice paddle days.  Didn't see much waterfowl or otherwise, but it was a nice paddle into some deep coves and creek inlets.  Since my phone was in the rice bag, I was unable to take any pictures the rest of the week.

There is a new band that I've become interested in that just happened to be playing at a small venue in Houston.  This is one of the reasons we decided to come to the Houston area instead of Galveston.  The Kongos are 4 brothers who grew up in London and South Africa.  Their music has an African/Cajun sound to it.  Some songs remind me of the Beatles.  It's a unique sound and it's the heavy drum beat that really attracts me to it.  Growing up in an Italian family with my Gramma playing the accordion, I've always loved that instrument too.  I enjoy hearing it played in a different style of music.  Here is "Come with me Now", one of my favorites:


Come with me Now 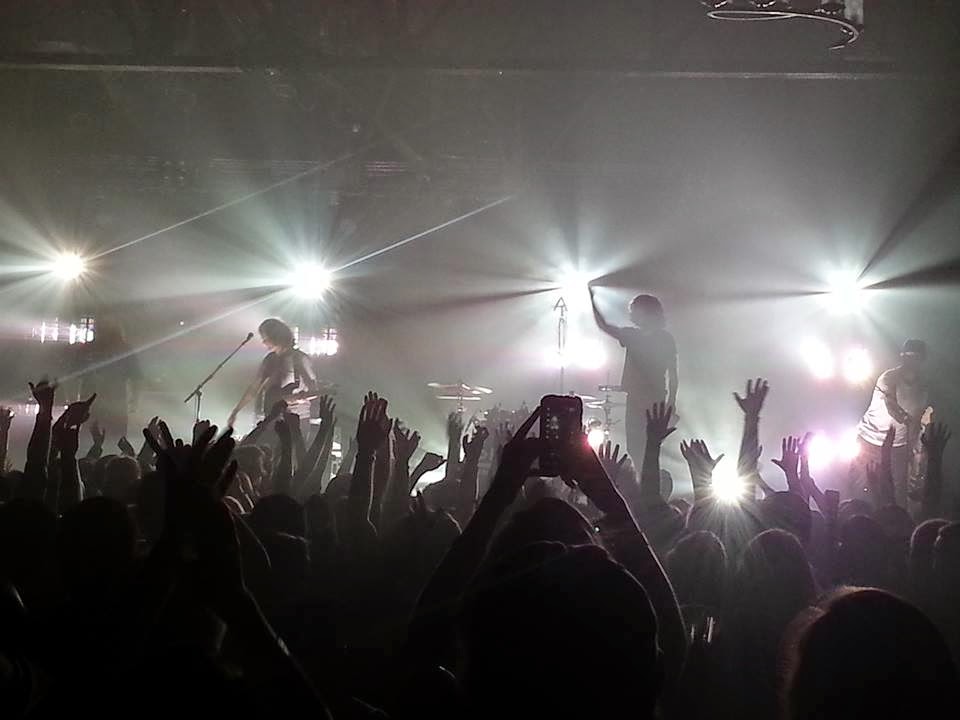 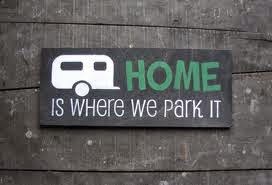