Another short drive north brought us to our next stop in Laughlin, Nevada.  We did stop to get a couple of geocaches at the CA/NV state lines.  Driving this route we leave Arizona, enter Nevada, quickly cross into California, then cross back to Nevada. Across the road from where we pulled over was this interesting little tree.  It was decorate up with colorful garland and ornaments.  Maybe a memorial? 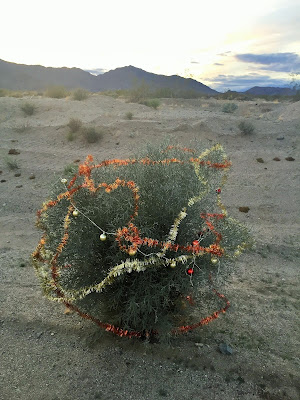 I'm surprised the strong winds didn't blow everything off of it. 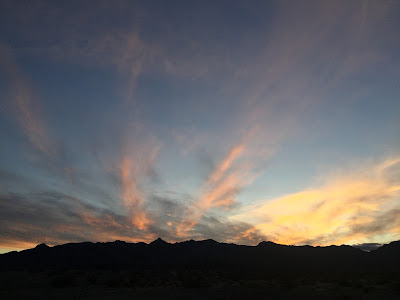 The sun was going down just as we pulled in to the campground. The Big Bend of the Colorado State Park is a very nice, small and clean park.  Maybe 25 sites.  All have full hookups. It was full when we arrived but they have a small lot that you can dry camp on while waiting for a spot to open in the morning.  They told us that usually a few spots open each day.  This park is entirely First Come, First Serve.  I think all Nevada state parks are set up this way.  I prefer it when you can reserve a spot in at least 1/2 the sites. We could spend $30 a night for full hookups or we could buy the Nevada State Parks Pass which gets us free entry to all parks and free camping (dry camping).  If you want hookups, it's $10 a night.  We figured since we'd be here at least a week and staying at another state park later on that it would be cheaper to get the pass for $200.  It's good for a full year so when we come back to Arizona next January we'll drive through Nevada instead of California so that we can use it some more. 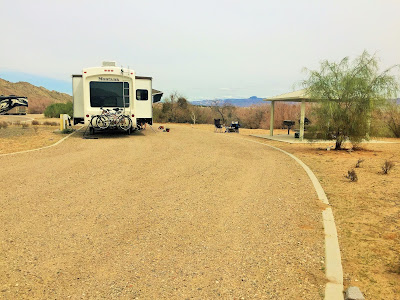 Just like we were told, four people left in the morning and we got a great site.  #17.  These sites are also HUGE.  About 100 feet.  They come with a nice covered patio with picnic table and a firepit. 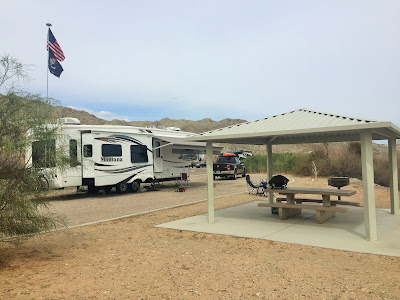 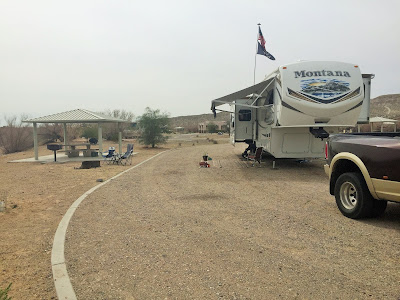 It was a bit overcast about 1/2 the time we were here and sometimes windy and chilly. 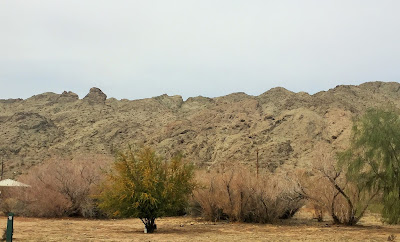 The view of the mountains across from the park. They were pinkish-grayish beige. 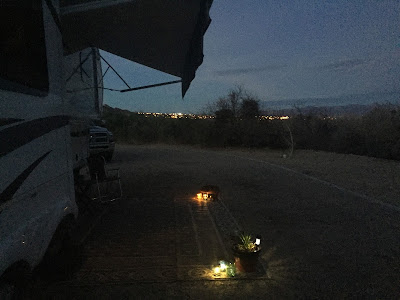 You could see the lights of Laughlin from our site on one side and the lights of the homes alongside the Colorado River which was in front of us (although you could not see the river). 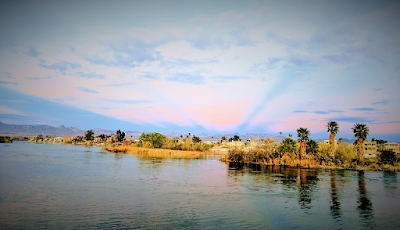 The next day we did a couple of hikes through the park.  One took us to the river where we got some great pictures.  Steve took these. 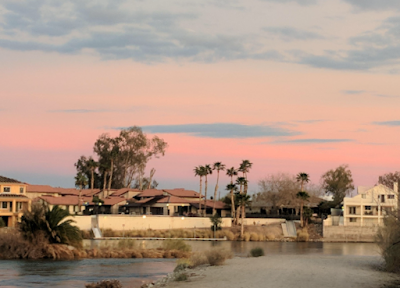 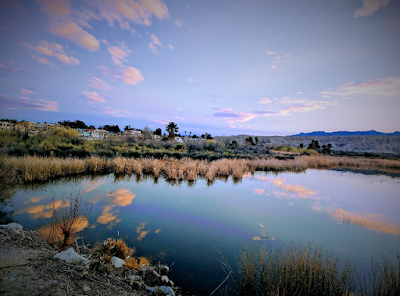 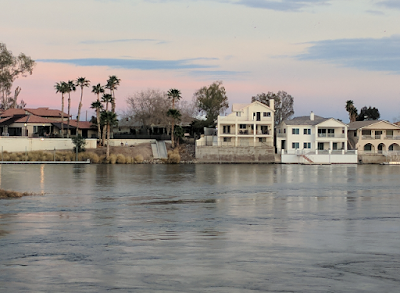 The river was running too fast for us to put the kayak in so that was disappointing. 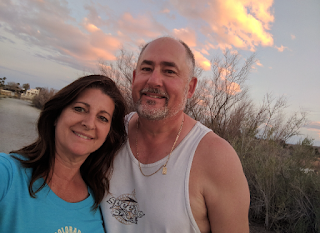 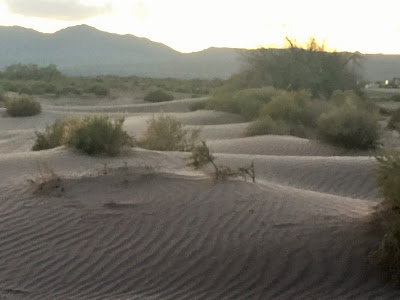 Later that second night we took the short drive, less than 4 miles, into Laughlin.  We made our 4000th geocache find in this sandy field.  It was full of little sand dunes.

Then we drove down the main street where all the fun happens at the casinos.  This was our second time here but that was years ago. 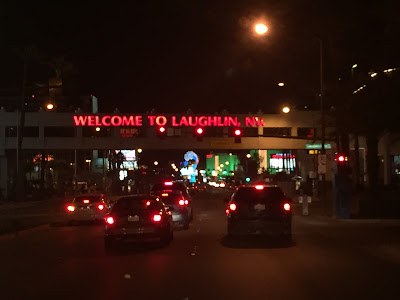 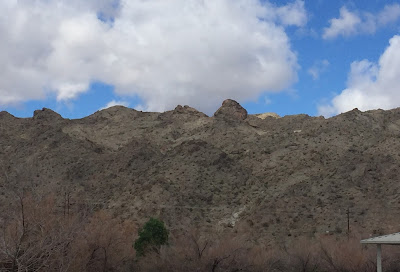 I received a text from RV friends Craig & Jo telling us they were at the Grand Canyon to spend a few days before they head to the Reunion Rally in Pahrump.  That's where we are headed too.  The weather took a turn for the worse for them and since snow was expected the next day, they boogied out early.  There are several of us that met at the seminar by RV-Dreams back in 2014 to learn about this lifestyle and see if it would work for us.  We have all kept track of our little group of about 20 couples over the years.  Even though we are all scattered around the US, several will be at the rally in Pahrump.
Back to Craig and Jo.  They asked us where we were and how long we'd be there.  When we told them we were at the Big Bend of the Colorado and would be here for about a week, they asked if we minded if they joined us.  Of course not!! 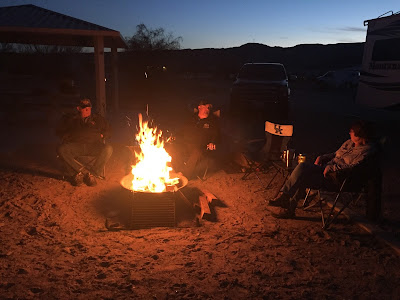 The wind was calm that night so we had a great time around the fire catching up.  Then I got another text.  This time from Steve and Dianne.  They are heading back up to Canada and were thinking of spending a few days where we were.  GREAT!  The more the merrier!  We had last spent time with them in Quartzsite in January so it will be nice to see them again.  Next time we'll be together will be back in Quartzsite next January.
Back in Lake Havasu City we had so much fun with Al and Ingrid that we wanted to meet up again when we got to Laughlin.  Well tonight is as good as any, so the 8 of us had dinner at Bubba Gumps in Laughlin.  It was so nice of Al and Ingrid to make the hour and a half drive to get here. 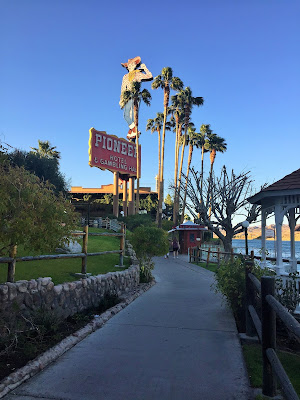 We took a stroll along the walkway at the river to get to a place Ingrid said had the very best Eclair's. 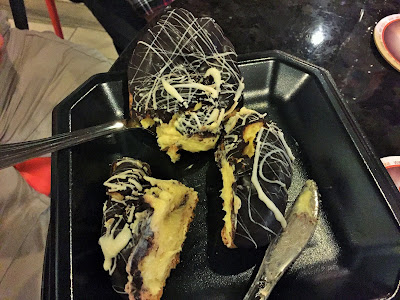 I can't remember the name of the place but we all shared a few desserts.  Steve and I split a cannoli. 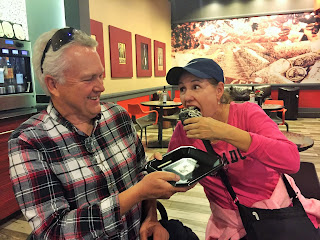 Al and Ingrid having a little fun sharing theirs. 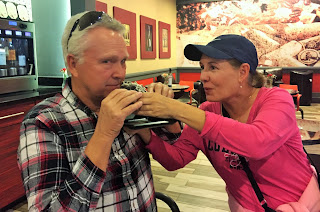 They had a long drive back so the rest of us continued our stroll along the river. Thanks for coming! 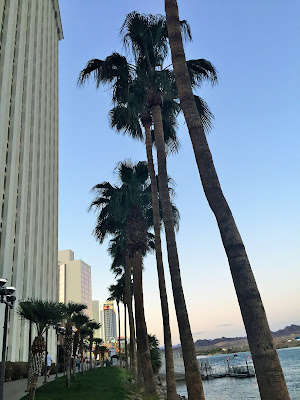 A little more walking to burn off all that eating.  We made our way back over to the Colorado Belle to do a little gambling.  Since it was St. Patrick's Day there was a lot of green being worn and lively festivities. 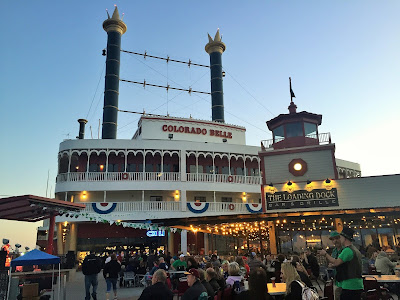 You'd think it would be easy to find some Corned Beef and Cabbage being served for dinner but it wasn't.  After walking around and a few calls we found a place across the street at the Aquarius. 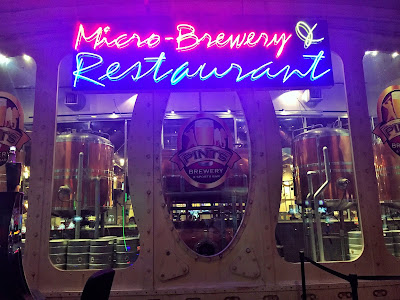 We had wanted to try out the Pints Brewery but it had a very long line.  So off to play some slots. 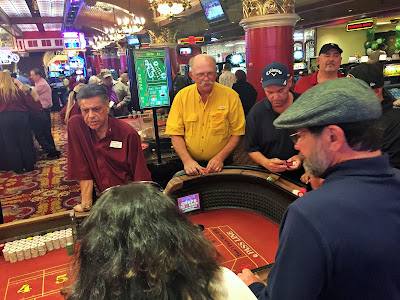 Craig was keeping an eye on the Craps table and I made my small donation as usual. 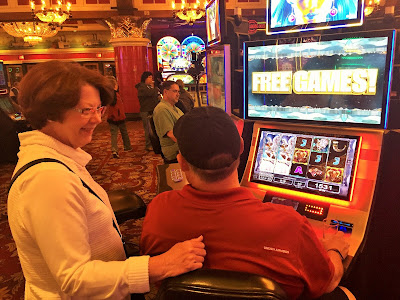 Steve got a few small wins but in the end we all went back with empty pockets and full tummies.
We just love it when we get to spend time with friends, especially when it's unplanned.
Tomorrow we spend the day in Oatman, just over the Arizona border.  None of us has been there before.
Posted by DebbieM