Once we were all packed up, a short drive brought us to our next spot.  We'll be boondocking to the north, above Lake Havasu City.  We'll be doing a little hiking around the area, but mostly just chilling.  My brother will be stopping by later in the week on their way back from Florida, heading back to Placerville. 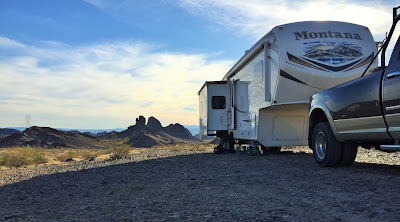 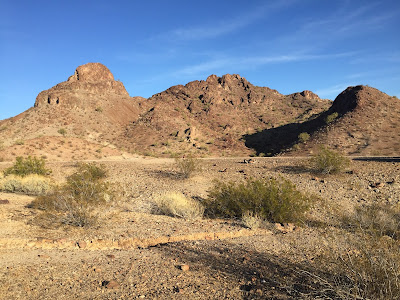 Our new spot at Lone Pine BLM.  The blue dot below is where we were, just off AZ95.  Don't know where they got the name as there are no trees in the area :-)  The location is a couple of miles north of Craggy Wash BLM.  Five bars of Verizon LTE.  The bluff is susceptible to winds but wasn't dusty.  There is plenty of room up top and more down below.  It was clean and quiet considering how many people were here.  The top can be a little slopey.  We had a really private peninsula but we did have to level more than we like to. 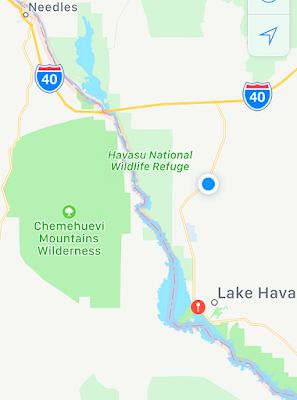 It was only a 5 minute ride into the north end of LHC where there is a Walmart, gas a nice movie theater.  We went twice and saw Game Night and Red Sparrow.  We enjoyed both. 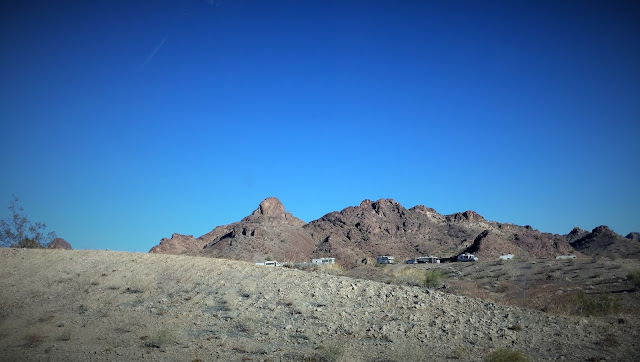 Here it is as seen from the highway.

We liked the colorful rocks that were all around.  Everywhere you looked there were red rocks on the hillsides with streaks of green patches, pinks coming out of the purples and lots of tan and browns. 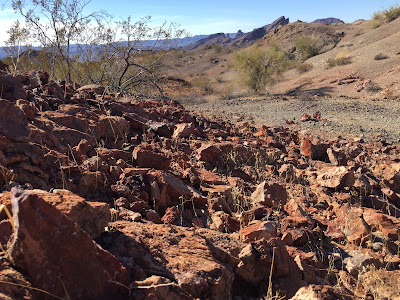 After hiking through the washes and rocks it was time to eat. 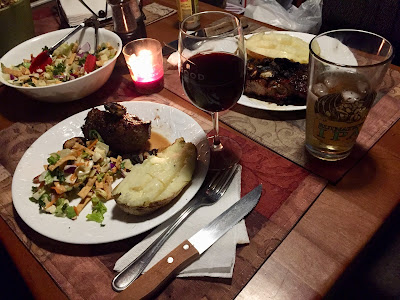 Another great dinner!  Grilled New York steak, potatoes and salad. The winds had calmed down so we had a nice campfire and watched the sun go down as it cast pretty shadows across the mountains. 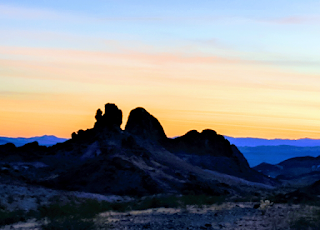 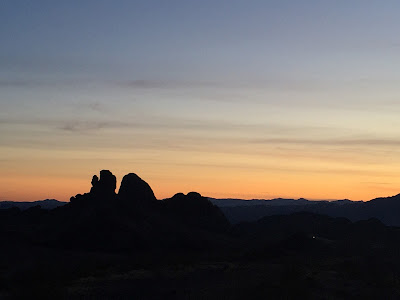 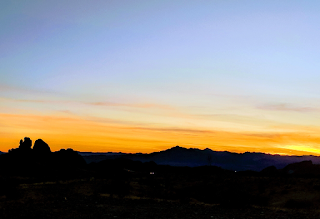 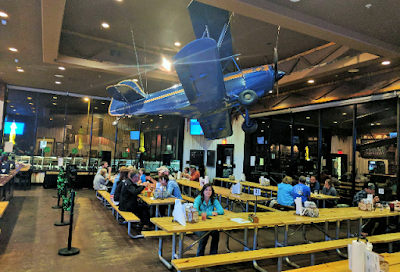 We had read that Hangar 24 in Lake Havasu City had great appetizers served at their Happy Hour.  It didn't start until 7p which worked perfectly for us as Steve had a late work day. 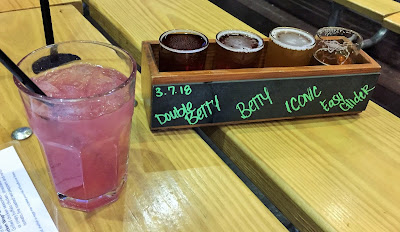 Appetizers were $5 each so we split a couple.  The wings were done in a spicy Cajun sauce and we also chose the Korean Pork tacos.  Both were great.  They had a nice selection of menu items. We'd come back just for the food.  The beer was very good too. 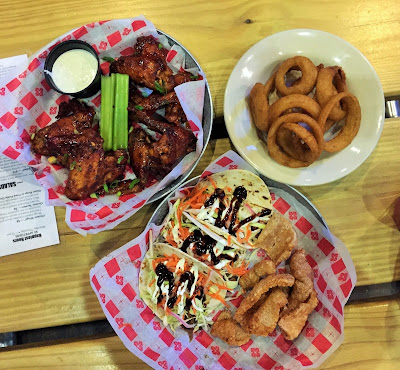 My brother and sister in law, that just started fulltiming, were on their way back from Florida and going to be passing by us on their way to Placerville.  They spent a couple days with us so we took them for a quick tour of Lake Havasu City and the London Bridge. 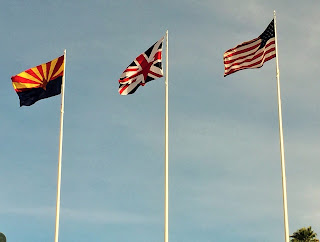 They treated us to a drinks and appetizers at Barley Brother's Brewery.  A great place to relax with a view of the bridge and lake from the outside deck. 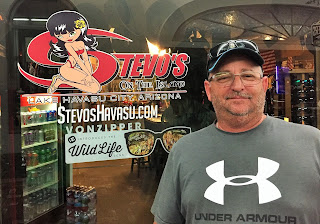 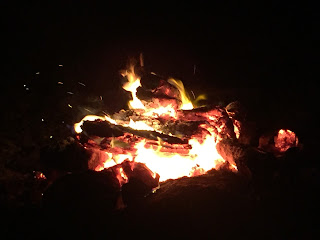 Our short visit ended with a campfire and stories of their travels to/from Florida.  They headed out the next day.  We'll see them back home in April.

Saturday came and we decided to take a drive around the area and do a little geocaching.  We loved this little frontage road along part of I-40 near Yucca, AZ.  It had the most dips I've seen in a road like this. 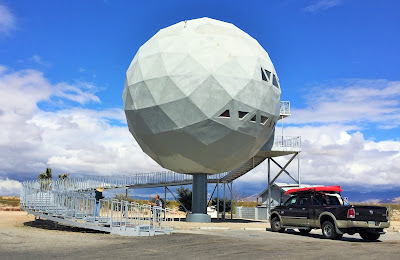 Along the way was this interesting home that looked like a giant golf ball.  It's a private residence so you can't go in it.  There is a very small snack store out front.  Out of character, I chose a tube of Pringles chips and a Snicker's Bar!  Bad, I know. 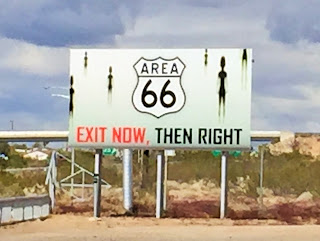 The only aliens we saw were these colorful pigs name Butzy and Bitzy. 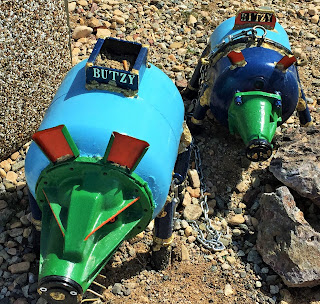 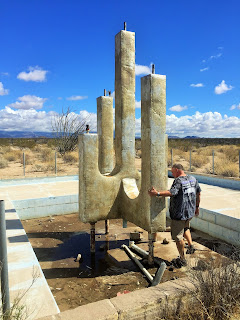 There was this old fountain in the middle of nowhere that had a geocache hidden at.  We never did find it but how strange to have this large fountain out in the desert with nothing else around.  I wonder what the story was? 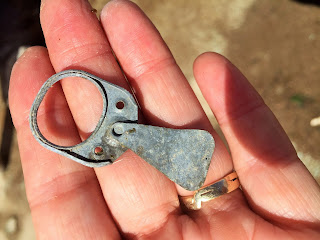 I did find an old pop top.  Remember these?  We used to collect them up around some of the lakes we used to go to when I was a kid and we'd make necklaces out of them. 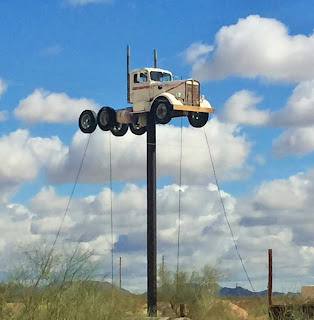 This old railroad town of Yucca has seen better days.  Not much here anymore but old boarded up business and homes.  And this large 18-wheeler on a pole. We also hid a geocache near here at the Rest Stop.  Take a look if you're in the area! 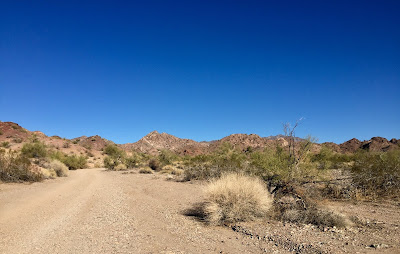 We checked out some other boondocking spots and finally found the Craggy Wash BLM area. We would have rather been here.  It's a more protected area from the winds that come through and more green.  It also had great Verizon LTE for quite a ways back. There's a lot of people in the beginning but thins out as you go further back.  It's a huge area with a camphost and kept very clean.  You can find a very nice private spot in the little craggy canyons.  There is a sign marking the area but not until after you pull off  95.  The coordinates I got off Campendium were not for the turn off itself which made it difficult for us to find. 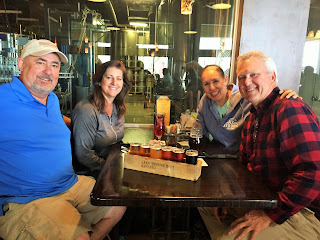 We were happy to hear that Ingrid and Al were still in the area.  Since our plans changed earlier we though we might've missed them.  Turns out they were in the area for an extended time and were able to come meet us at the College Street Brewhouse and Pub.  It was so nice of them to drive over an hour for the visit while they did some shopping.  The IPA's and food were pretty good, the company even better.  We had such a good time and clearly Steve and Al had much more to talk about so we headed out in search of an ice cream parlor to continue our visit.

Now that we're all rested up we will continue our drive north spending more time in Laughlin and Lake Mead. We'll finish things up in Pahrump where we will have a big reunion with many of the folks that we met at our first Fulltime Seminar before we even had our truck and trailer.  Stay tuned for more surprise visits from friends.
Posted by DebbieM