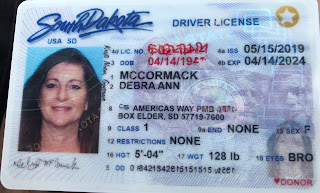 We've been South Dakota residents for 5 years since we've been fulltiming, but this time our visit was so I could get my South Dakota drivers license.  Piece of cake.  We use Americas Mailbox for our domicile and they make things very easy.  To get your drivers license you need to spend one night in the state.  So we once again stayed at Americas Mailbox.  They have a small campground which makes things convenient.  This way we could pick up our mail and get my license.  You need to bring a receipt from where you stayed as well as a couple of other pieces of ID.  No test or anything else special required.  I was in and out.  So now I'm officially an official South Dakota resident.  Bye bye California. 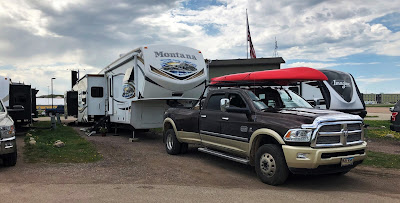 Since it was still snowing and cold, we looked forward to the electrical hookups.  A water line had burst before we arrived so we had to fill our tank instead of being able to use the water hookups.  No biggee as we were only staying a few days.  They are expanding the camping quite a bit and the new area will be nicer.  The way the spots are set up now you share the site with the person behind you.  Horrible if you need to stay longer.  Both us and the person behind us had longer rigs so there was only about 2 feet between our back windows. 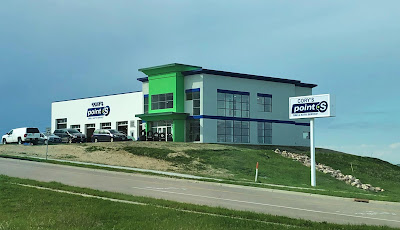 We were also able to get the trailer wheel fixed while we were here.  Point S did great at getting the tires and rims switched and remounted for us.  When we get back to California we'll be looking for a new rim(s) so they all match.  Right now we're just using the ugly spare rim. 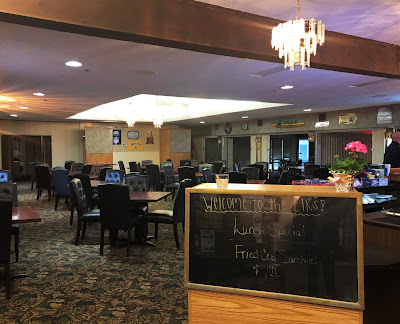 There is an Elks Lodge in Rapid City so we decided to check it out for future stays.  The camping area is just, meh, but the lodge itself is nice.  It sits on a beautiful golf course.
Large lounge, restaurant and bar.  They even had a fun gaming section. We shared some wings and enjoyed talking with the bartender. 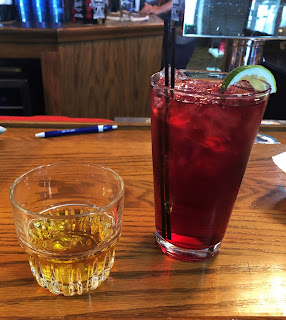 I had found some interesting things to see while we waited for the rim work.  There was supposed to be a 45 foot tall Statue of Liberty nearby.  I found this and some other quirky things from Roadside America.  It appears the statue was once part of the outside of a sports bar.  The statue is gone.  Just the pedestal remains.  On to the Tire Man. 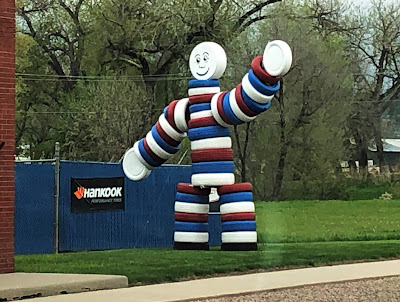 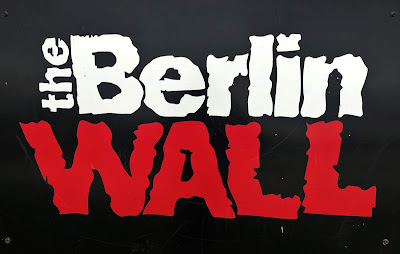 The best was the segments of the real Berlin Wall.  I really wanted to see this.  It was in a park in the downtown area. 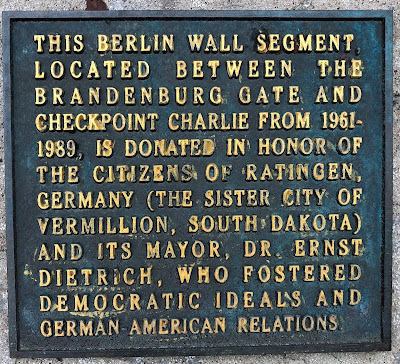 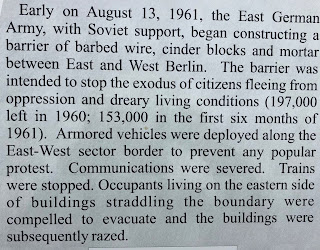 It gave me shivers touching this wall.  Such a very sad time back then. 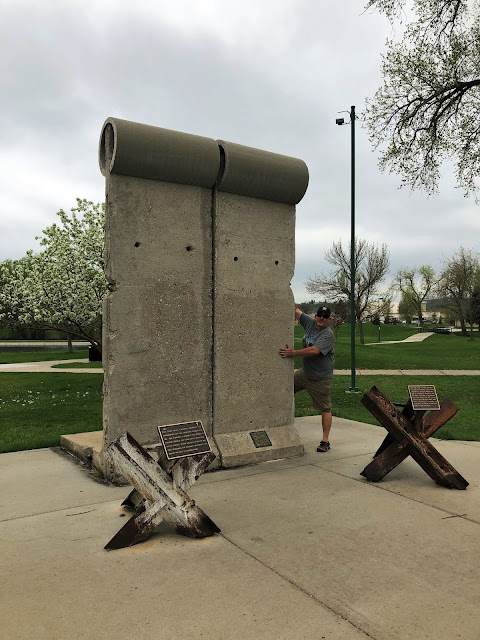 A section of the wall (above) and a side view (below). 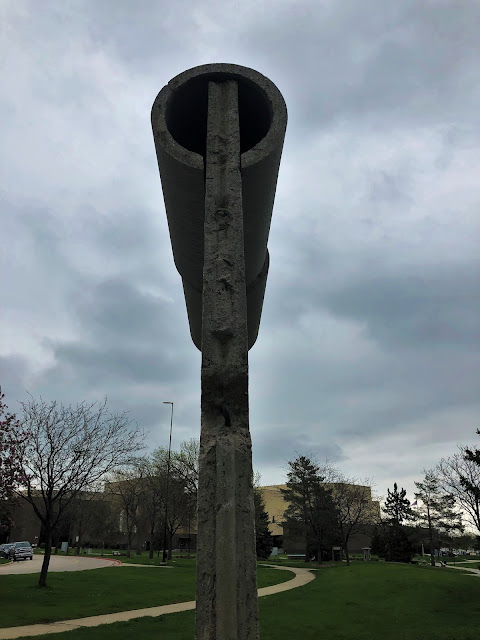 They made it rounded at the top supposedly so you could not climb over it. 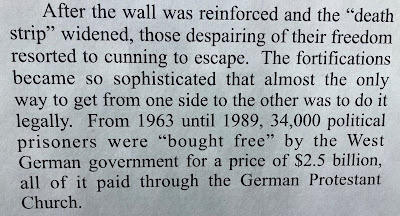 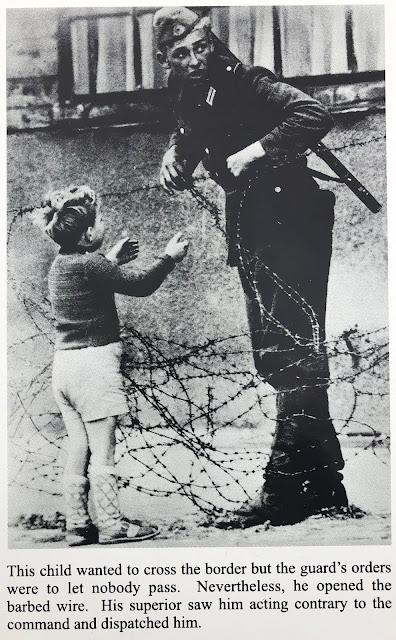 On November 9, 1989 the wall came down when thousand of residents broke down the wall with hammers and chisels. 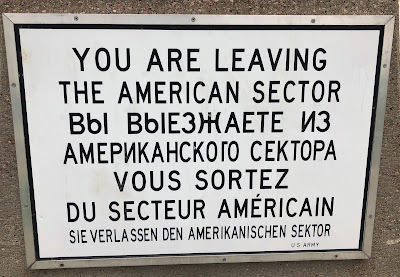 I was impressed with how much info they had with the wall segments.  I didn't know there were sections all around the world but there are.  After I posted it on facebook, several of my friends told me about exhibits they saw around the US.  I never knew.  There is even a segment at the library in Mt. View, CA not far from where I grew up.  Amazing!  To find where they are located in the US click HERE.
Then in the downtown section was the Street Corner Presidents.  The bronze statues are all over the downtown.  We just saw a few of them. 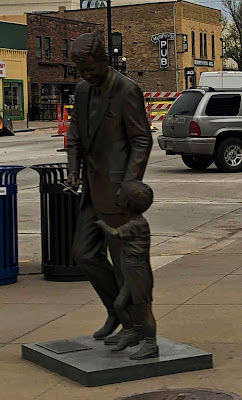 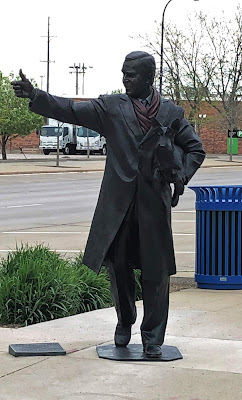 Kennedy and Bush.
There was also an Art Alley that sounded much like the one we visited in Boise but we ran out of time and didn't get to see it. 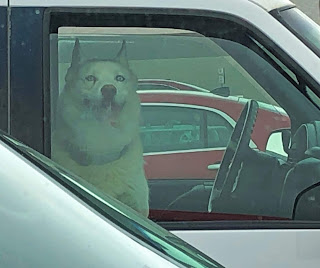 We needed to pick a couple of things up at the grocery store.  I waited in the truck while Steve went in.  When I looked at the truck near us I could see I wasn't the only one waiting! 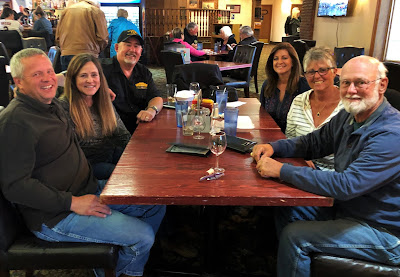 We had just left our visit with Jim and Barb last week.  Then Guy and Sue were due to visit with them.  I laughed when I got a text from Sue letting us know they were in Rapid City to pick up some items from the lumber yard for Jim and would we want to meet them for dinner back at the Elks.  Well, of course!  So we had one more fun night with the gang! 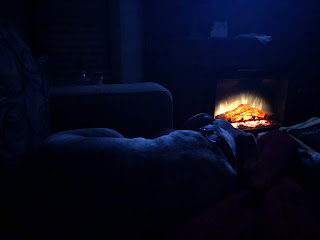 Hurley cuddled up on my lap and we enjoyed an inside fire.  Tomorrow we leave for our final stop in South Dakota before we head into North Dakota, the only state we haven't camped in yet with the 5er as fulltimers.
Posted by DebbieM