On our way out of Curt Gowdy State Park we wanted to stop by the giant Lincoln Head we could see when we took the exit on 323 off I-80 between Cheyenne and Laramie, Wyoming. Lincoln's head was built by Wyoming's Parks Commission to honor Lincoln's 150th birthday. It was sculpted by Robert Russin, an artist and a Lincoln fan (When he died in 2007, his ashes were interred in the hollow monument). But why is Lincoln in Wyoming? It's because the head originally stood alongside the highest point of the old coast-to-coast Lincoln Highway, at Sherman Summit, 8,878 feet above sea level. When I-80 was completed in 1969, the head was moved here -- losing a couple of hundred feet.  The bronze head weighs over two tons and is 13.5 feet tall. It's perched atop a 30-foot granite pedestal, ensuring that it can be seen from quite a distance.  For travelers, the Lincoln head is an easy stop at the Summit Rest Area and Visitor Center. It is said that he stares toward the rebellious South. 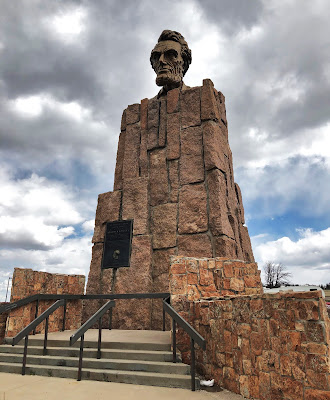 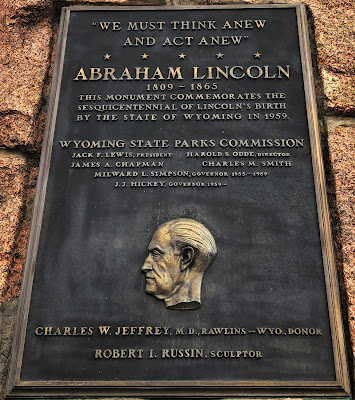 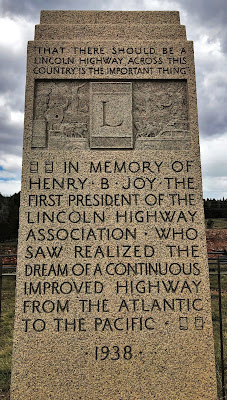 I learned a lot about the highway and the Boy Scout Markers.  Not sure if there are any left? 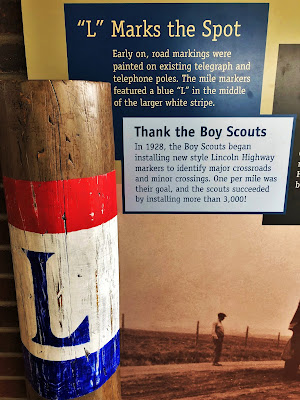 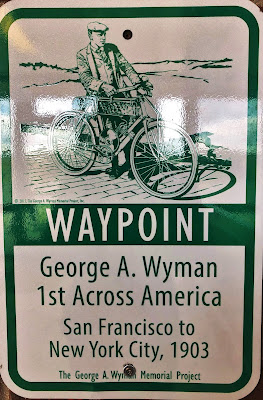 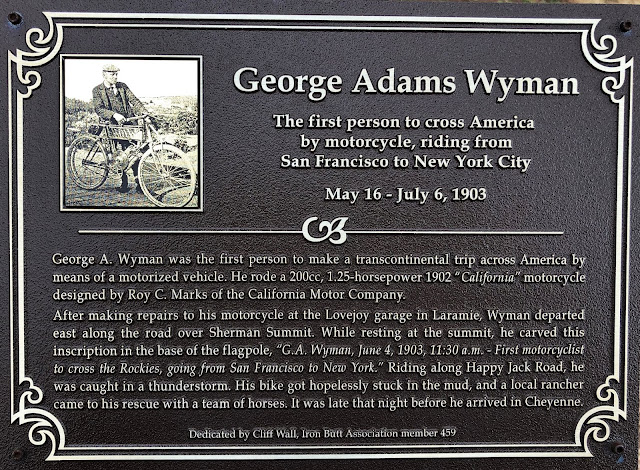 We were happy to be on our way.  We'd be doing a couple of overnighters and one more stop before we get to our much anticipated visit with Jim and Barb.  We drove through Medicine Bow but there wasn't much to it.  A small visitor center in the old train depot and The Virginian, an old historic hotel across the street. 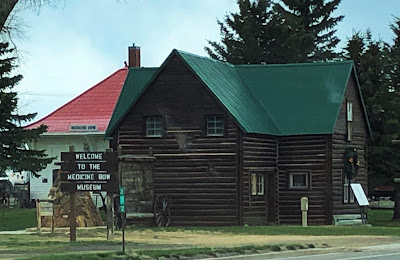 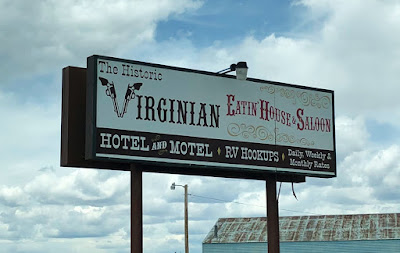 It looks very interesting on the outside but the reviews for years back are horrible.
We kept on driving.  It's been 3 weeks we've been back in Wyoming and we're more than done with the flatness of it, not to mention all the cold, wind and snow this May has brought. 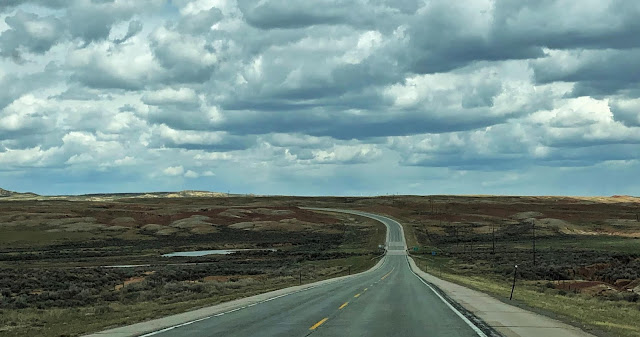 Some color and scenic in its own way, but mostly flat and lots of sage scrub. 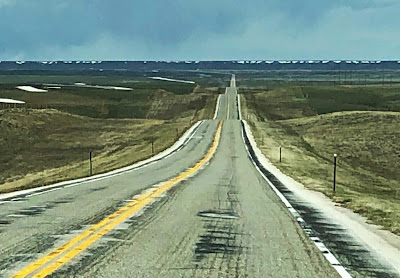 As we head to the far NE corner of Wyoming it gets a little more hilly. 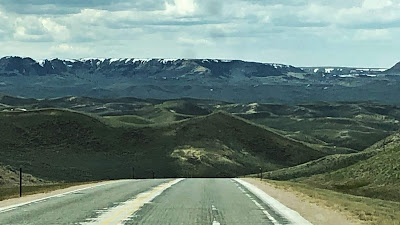 The colors get more intense as we get to our stop for the night at Okie County Park Campground on Lake Alcova just outside of Casper. 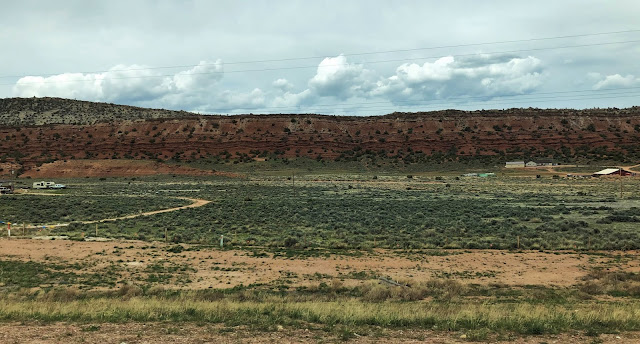 It would've been a long ride back to Casper just to have dinner for Cinco de Mayo so we just made margaritas and had our own celebration on the lake. 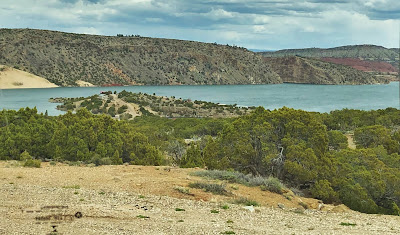 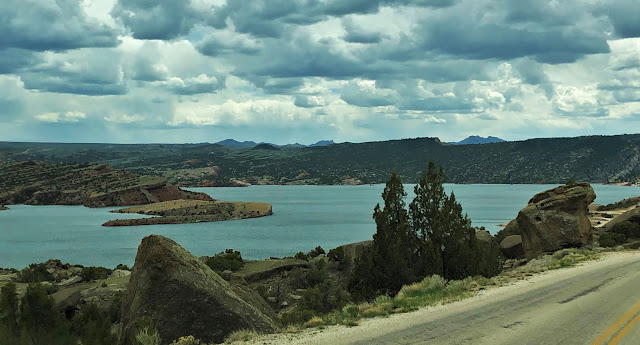 Alcova Reservoir is very pretty and has many private and BLM run campgrounds around it. 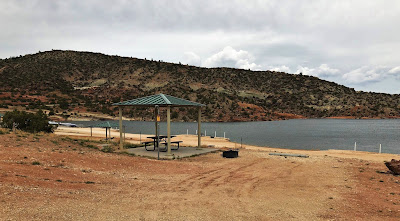 We talked to a ranger familiar with it because we were going to stay at a different one and I read about the shale soil getting really slick when it's wet.  There was a possibility of rain so we took his advice and chose Okie.  No hookups, $10.  You do get a nice covered patio, table and firepit.  Most sites were right on the water.

Our site.  Not too many can hold a large RV like ours but this site was perfect. We were the only ones at this small campground.  It is a little steep coming down the short road and had some narrow turns, but we were fine. 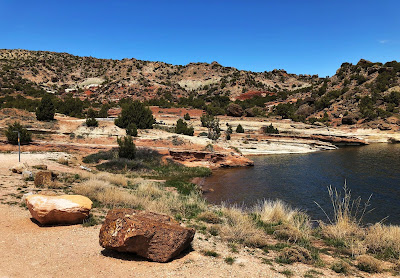 Very pretty area.  I fished a little with no success.  It would be a great place to kayak and fish if it were warmer.  It's still in the low 40s during the day. 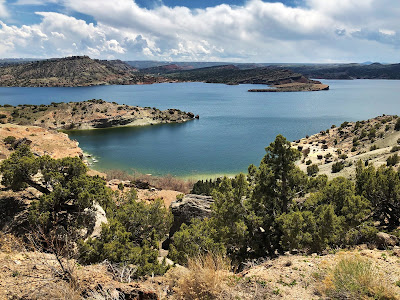 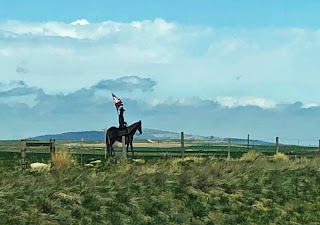 We forgot to drop off our payment so we stopped into the town of Gillette to drop it off at their field office since we were driving through. 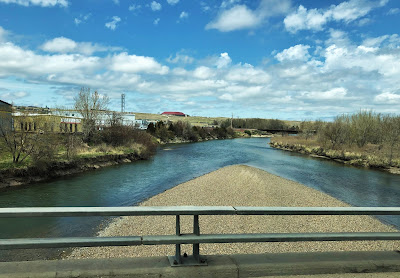 The Platte River rolls in and out of town. 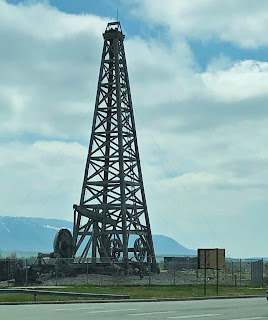 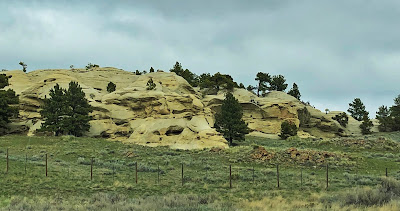 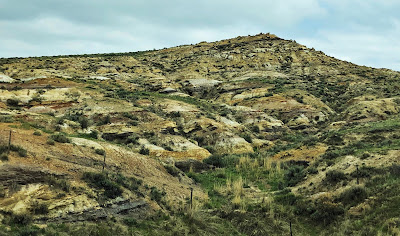 More colorful scenery as we drive to the small town of Wright as it's on the way and has internet. 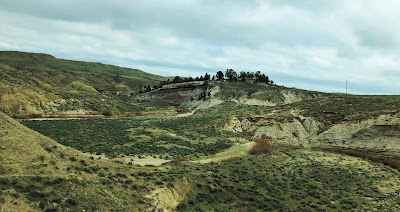 This was our exciting overnight at a large Gas Station with a huge lot popular with other RVers and many truckers.  This area is huge in Natural Gas and Oil.  There are pipelines everywhere.  There was a touch of snow overnight and even with all the truckers I slept fine with earplugs in.  They even give you free coffee! 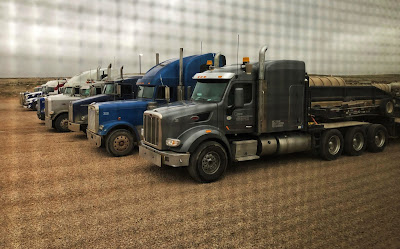 View out of our bedroom window.  Boy w, as it cold and windy here!
As we drove off I got a text from my friend Tina, with a link to Arizona State Parks.  I didn't pay close attention at first then noticed the picture.  It was our rig at River's Island State Park from last year!  How cool is that?! 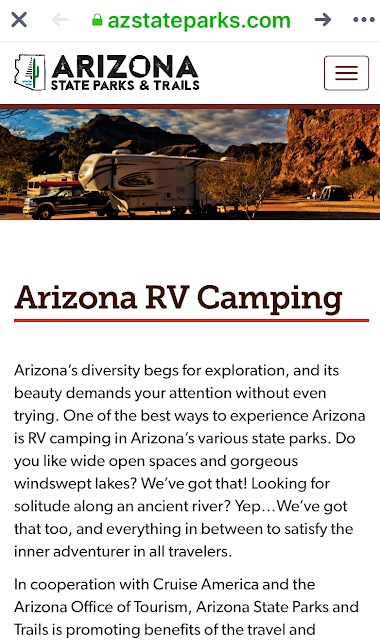 Yep, that's us! I guess we're famous in Arizona now :-)
Posted by DebbieM