As we head back to California for the holidays, our stays will be 1 and 2 nighters mostly with drives of 2 - 3 hours.  We end our zig-zagging through Idaho and Oregon.  Once we hit Highway 395 it will take us straight south through Eastern California. 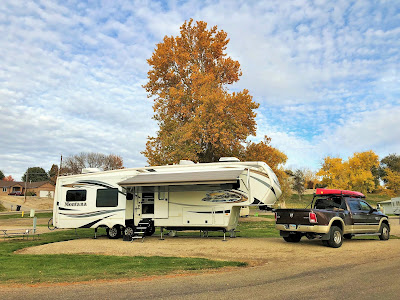 The City Park has less than 10 campsites with W/E.  There are plenty of sites that will hold a 40+ foot rig.  A dump station is on the grounds also.  $15 a night.  As usual, the water was shut off for the season but there was a working fresh water at the dump station.  5 bars of Verizon LTE.  There are a few interesting restaurants but we did not try any. 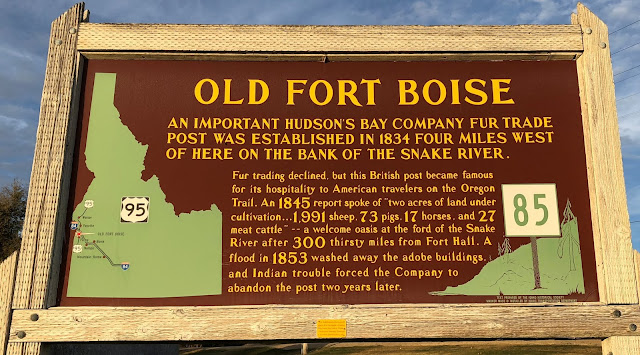 While Parma has a population of less than 2000 and is very rural, we had a couple of reasons to stay here at the tiny county park besides being convenient.  There is Old Fort Boise right on the same grounds as the City Park. 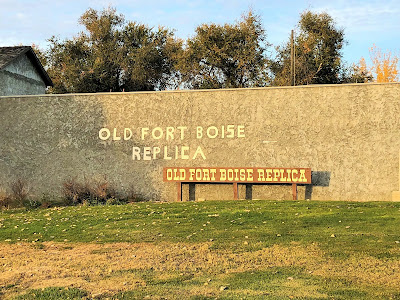 The Snake River washed away the last location of the fort and it has been rebuilt here.  It was much smaller than we thought and closed for the season.  Figures. 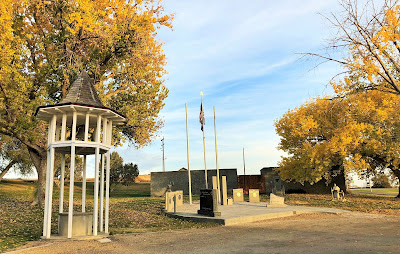 The other fun thing we hoped to do was go to the Motor-Vu Drive In.  It's been family owned and run since 1944. 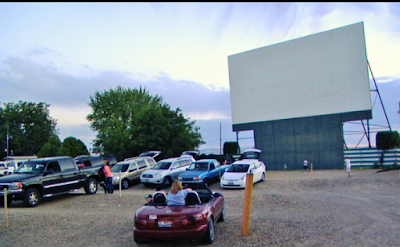 Above is what we hoped to find.  Below is what we found.  Bummer.  Struck out again!! 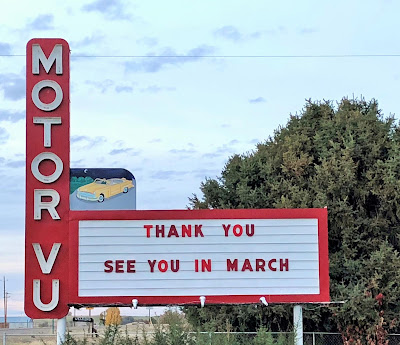 It closed the weekend before we got here. 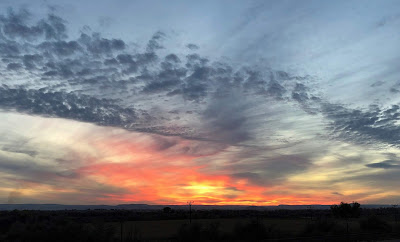 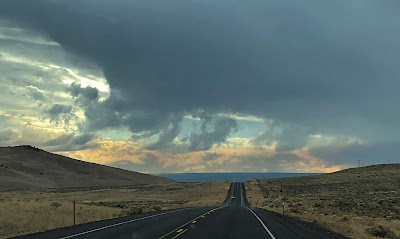 Today would be a couple hour drive to Chickahominy Reservoir to stay on some BLM land. The weather was scheduled for rain, wind and cold temps.  We were half way there when we saw a strange pink color to the sky ahead.  It's too early for sunset?  Turned out to be a fire blowing by in the west. 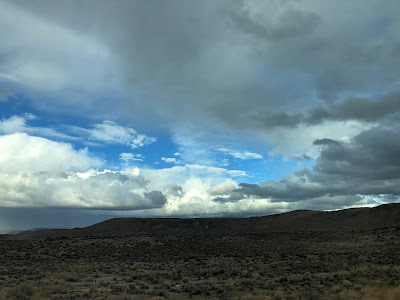 There were some beautiful blue skies with some very angry clouds blowing over the plains. 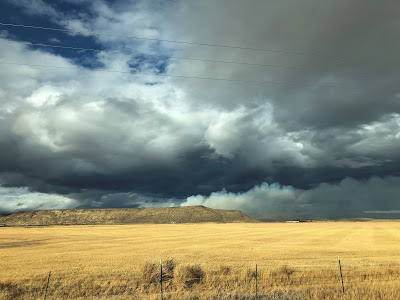 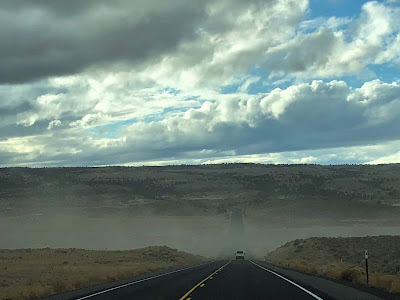 As we topped another hill, we could see what looked like a huge dust storm ahead.  The winds were hitting us sideways at this point.  Steve was not enjoying the drive. 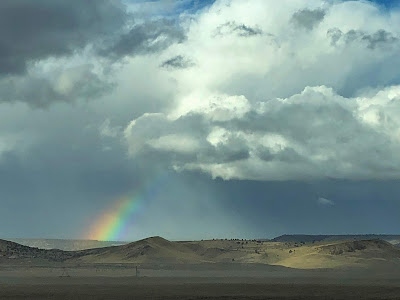 Then we passed through that a huge storm that left a gorgeous rainbow and hopefully helped those fires. 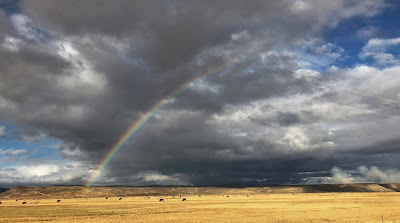 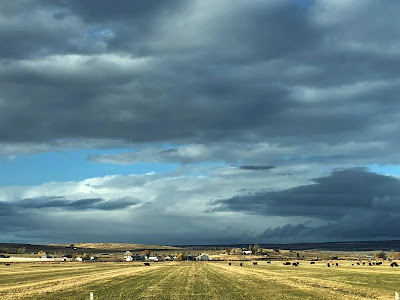 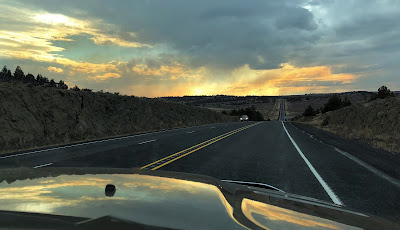 The rain ended and while it got very cold the clouds were getting ready to make some magic.
There is nothing out this way for hours but just a couple of miles past the cutoff for 395 is the Chickahominy Reservoir.  Even though it's right off the roadway, you cannot see it until you turn off.  It's run by BLM and is normally $8 to camp but free during the off season.  Yay!  There are outhouses and no water, electric, dump or garbage so come prepared.  There are many campsites and a few right on the water.   Verizon was great!

There were picnic tables with canopies and fire rings.  We were glad to be able to have a fire or two since we've been in fire bans for a while now.  We needed to burn up the last of our wood before crossing into California. The wind stopped and the remaining clouds made beautiful work out of the sunset. 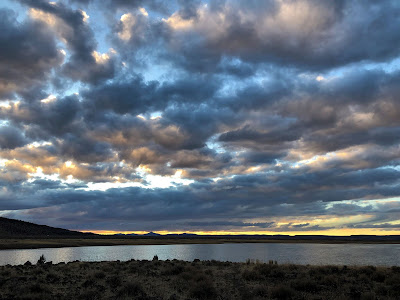 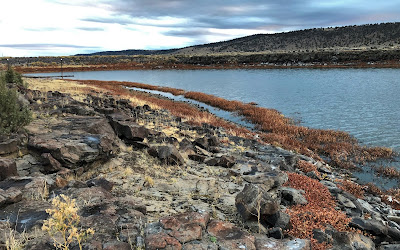 Lava rock all around.  The water levels were low but not bad.  We hoped to get the kayak out but it was just too cold and the next day it rained again. 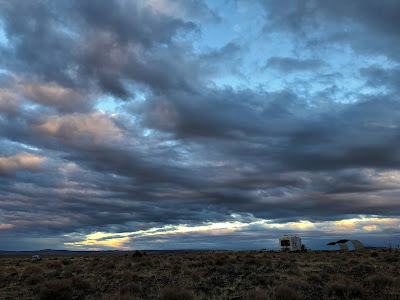 That's us looking back to our rig with the lake behind me.  You can see our new neighbor to the far left.  We were the only two here. You could hear faint traffic and lots of coyotes. 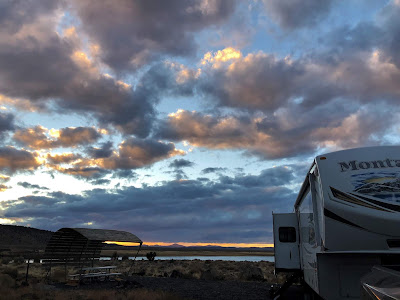 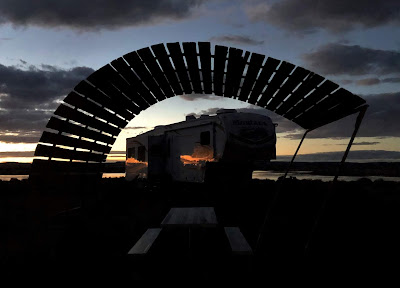 Great shot of the rig through the canopy.
And that's a wrap for Oregon.  Tomorrow we'll be entering California.
Posted by DebbieM