Philipsburg, MT
The Inn at Philipsburg RV Park
After leaving Yellowstone, we headed towards Coeur d' Alene, Idaho.  On the way though, we made sure our route would take us past Philipsburg, Montana for a couple of days.  A friend had mentioned that we should make sure to stop here as they are known for their sapphire mines.  Along the way drove through a little town we love, called Ennis.  It's a nice place to stop for a meal and some window shopping in the cute stores.

The drive along 287 was through rolling hills, ranches and tiny towns.  Sometimes I wonder when we drive past them, "What do they DO way out here?"  But I'm sure they love the quiet and isolation.  I was surprised to see how many long abandoned homesteads and cabins there were along the way.  I could've taken a million pictures.  What stories those places could tell. Besides cattle and sheep, Ennis is known for it's famous fishing along the Madison River. 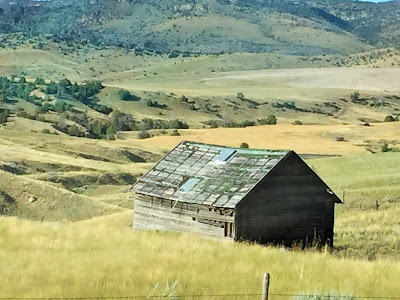 As we drove on I-90, just before we came to Butte, there were these beautiful rocky spired mountains referred to as the Boulder Batholith.  I learned these were created when granite was pushed to within a few miles of the surface before rapid cooling stopped it and caused cracks and fissures to occur. These cracks then filled with mineralized solutions from the hot magma below, containing copper, gold, silver and other now precious metals.

Another strange sight after coming around the mountain and seeing Butte below was what looked like a large statue way up at the top.  I googled it and found out it's called Our Lady of the Rockies.  This is the best picture I could get.  Here is one from the internet (below). It has a fascinating story that I'll tell in a later post when we spend some time in Butte next month. 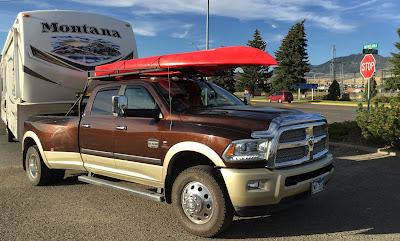 The green street sign above the stop sign is Montana St.  We had to get a picture of our Montana parked on Montana St., in Montana.  Too bad you can't really read the sign. 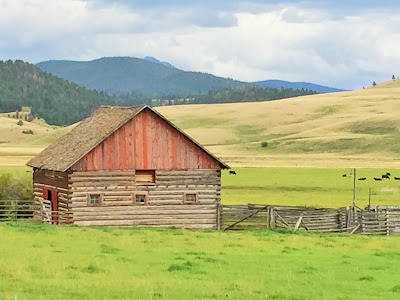 We stayed at a small private campground right in Philipsburg called The Inn at Philipsburg.  It was a very plain small campground with full hookups.  You parked on a gravelly grassy area.  Very nice owners.  It was ok for $30.  I'd consider staying there again if it were only a couple days.  Otherwise I'd look into boondocking in the beautiful forests. 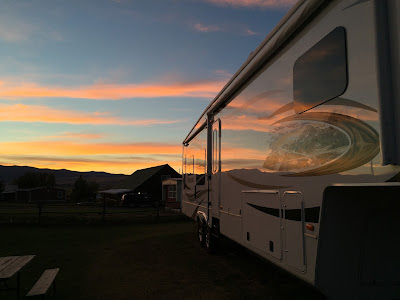 We arrived just before sunset.


Ok, back to the Sapphire Mine.  Our whole reason for stopping in Philipsburg.  We aren't rockhounds by any means, but we do love being outdoors for almost any reason and while not a huge jewelry  person, I do love sapphires.
Living in Placerville CA for many years we have panned for a lot of gold.  We've also dug for diamonds in Upstate NY, garnets and other gemstones along the way in our travels.  We were pretty excited to give this a go.  Our friend recommended we go up to the Gem Mountain Mine itself rather than panning at the store on main street.  You drive about 20 minutes through some gorgeous scenery. 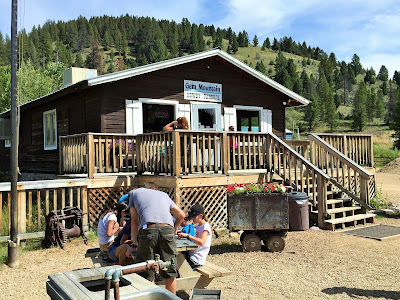 We chose the $22 bucket each.  We were there about 4 hours having a great time.  We decided it was the most fun we've had doing any other type of mining.  The staff is very helpful and demonstrates what to do, how to do it and what you're looking for.  Below is the equipment you'll need that they provide for you.  (Hey, Trace, you could easily split a bucket and you'd be close to your $10 limit.)

What I found out was after diamonds, sapphires are the second hardest naturally occurring mineral known to man.  The actual sapphire digging happens this way: you pour some of your bucket of dirt into a square metal tray that has a mesh bottom.  Then you take your tray over to the trough and wash the dirt. 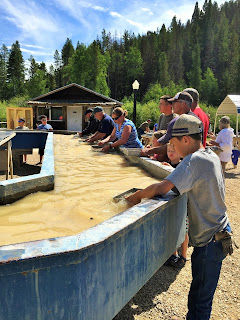 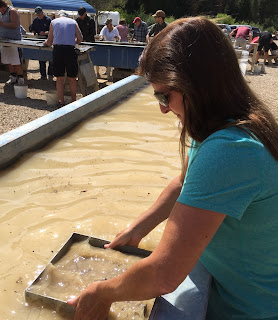 This is not as easy as it looks.  There is a specific process.  Luckily the dirt/pebbles are not that heavy.  You pour some of your bucket into this screen.  Then you lift it up and down to help clean out the dirt.  Next shake it back and forth like a teeter totter side to side.  Give it a 1/4 turn and repeat this process 11 times.  That's supposed to be the magic number.  This not only cleans it well but if you do it correctly, you should end up with sapphires on top of your pile when you bring your clean, dirt back to the table and flip it over.  Remember, they are heavier than the pebbles. Then you slowly pick through your spread out pebble/rocks looking for shiny glass-like round stones.  You brush off the larger rocks and pebbles as you go. 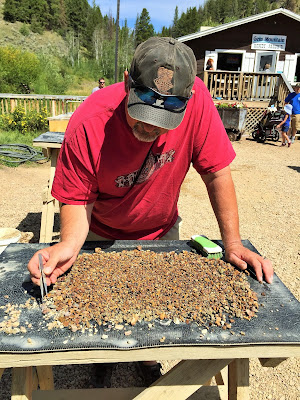 Here is Steve looking for sapphires with the tweezers they provide for you. They also give you a special tube to put your keeper stones in.  I also didn't know that sapphires don't get that beautiful blue color until they are heated. They can also be shades of yellow, green, purple, pink or red. 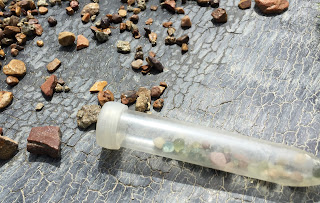 When you have finished washing, and sorting your dirt, you can bring your vial of gems in and they will separate the gems into categories and weigh them for $5.  There is about 60% waste by time they heat treat and cut them into faceted stones.  They also must not have too many flaws.  Out of all of ours, we had 6 that were of good enough quality and size to be processed.  Our largest were 3 carats.  We spent the $160 to have them done.  Because this process is done in Sri Lanka, it will take about 9 months.  There really isn't any way to tell what color or how the depth of that color will be until they are heated.


I wish we took a picture of the 6 stones we sent off, but we were so excited we forgot.
After all that mining, we were hungry and had planned on eating in town.  They also had a brewery Steve wanted to try out.
Philipsburg is one cute town.  Nicely kept up and lots of interesting shops and eateries.
The historic mining town of Philipsburg, Montana was founded in 1867. Prospectors and placer miners were in the area from the mid 1860’s. The first claims were staked in 1865. Early in the summer of 1866, one of the locators who was operating mines at Argenta, took a prospecting trip to the area. A silver “rush” followed, with numerous prospectors staking claims.  More history HERE
It was starting to sprinkle outside and it had cooled off quite a bit.  I'm not a beer drinker and was craving a coffee.  Off to The Daily Grind for a great cup of coffee.  They had a cute gift shot and a dash of whimsy too. 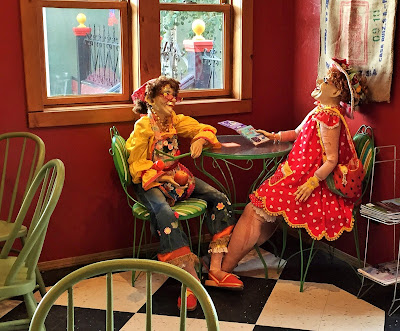 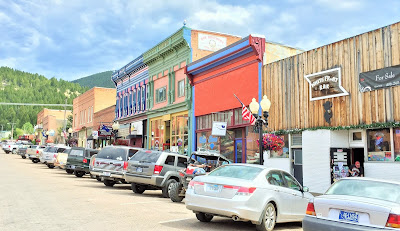 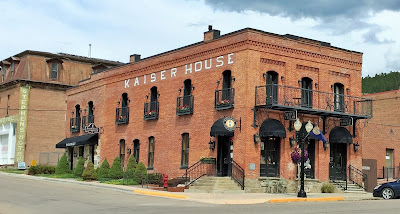 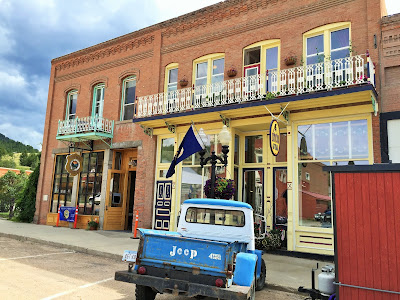 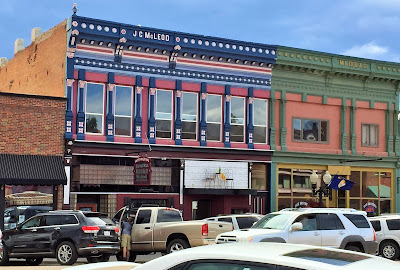 We had a great lunch at UpNSmokin BBQ House.  Great BBQ.  They have all of their awards lining the cute restaurant.  So good we forgot to take a picture.


We walked up one side of town and down the other looking in all the shops that were open.  Probably a good thing that the bakery and sweet shops weren't open that day!  Then we took a drive around to see some of the cute homes and other buildings. 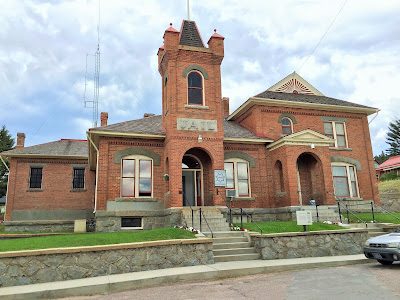 A picture of the jail.  You can't see it from here, but look below at what's hanging in the top window! 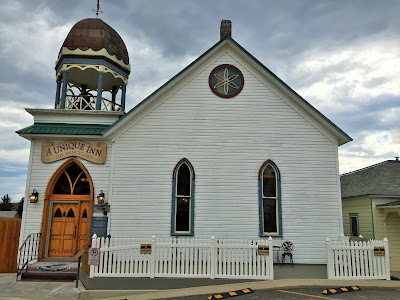 And lots of cute churches and shops that used to be churches.

Before we headed out we saw this interesting truck go by.  Notice the look on the dogs face in the next truck!  He's like, WTH?!  The old gentleman driving gave us an OOGA honk on his way by. 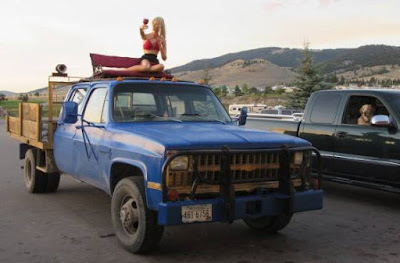 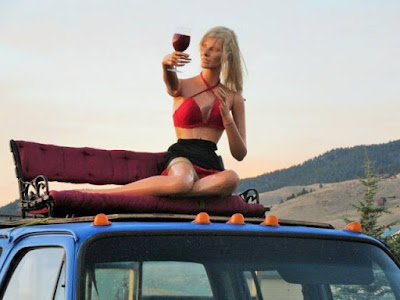 Next up, some awesome bike trails in Idaho!
Posted by DebbieM