It doesn't happen very often, but it did today.  With all the reservations I have been making over the last few days I didn't check on the cell connectivity at our next destination in South Carolina.  Oops.
I rely heavily on a certain App, but have found out that for some reason, even though these cell towers are very nearby, sometimes on the same mountain, it doesn't mean we'll have service.  I've been making sure to call each campground to verify as the service has been very iffy. 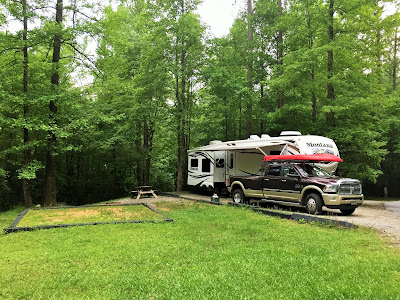 We had a beautiful spot at Table Top State Park.  There were 2 - 3 bars of Verizon LTE all along to the entrance of the campground.  Cool.  Once we got all set up and turned the computers on, nothing.  Not so cool.  Not even with our booster.  We knew there was WIFI at the camp store and visitor center, both very close by.  This works fine for me, but not for Steve.  Especially if he has conference calls to be on.  He decided to limp by for a couple of days, driving into the nearest town, but after that we'd have to cut short our visit here.  Too bad as there were some nice hikes and kayaking planned. 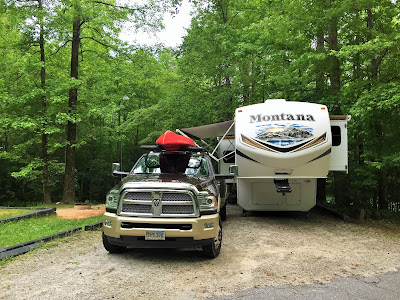 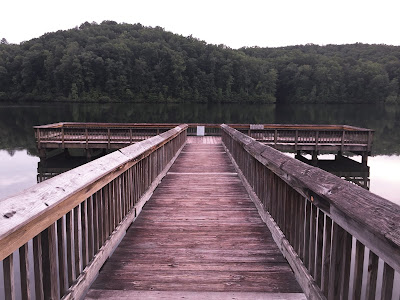 The visitor center had a nice dock you could fish off of and a nicely landscaped area in front of it that the ducks and geese were enjoying. 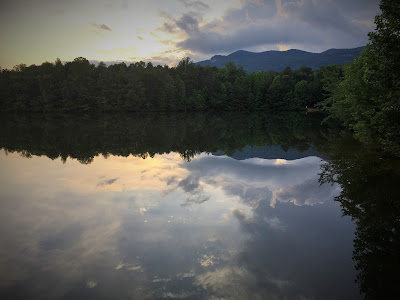 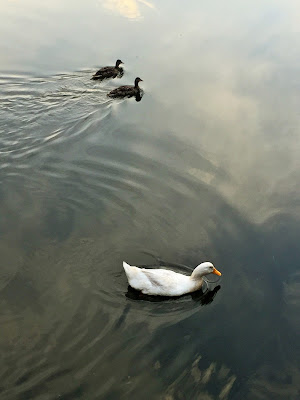 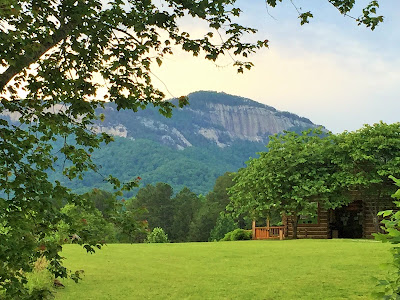 The visitor center with Table Rock in the background that we had hoped to hike later. 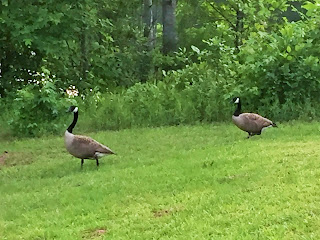 - - - - -
We did another drive/hike to Sassafras Mountain.  At 3,553 feet in elevation, it is South Carolina's highest peak.  Sassafras.  It's a word I find fun to say.  Kind of like Rutabaga.  Something about the way it rolls off your tongue.  Or Salsa (think Jerry Seinfeld). Oh sometimes I'm easily amused. 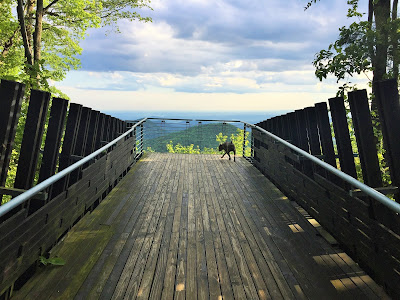 They have a nice little observation deck that hangs out over the edge a bit.  Nice enough view.  They are starting to look quite a bit the same to me now.  Really, very beautiful, but I'm finding the scenery and views lacking a little in variety. 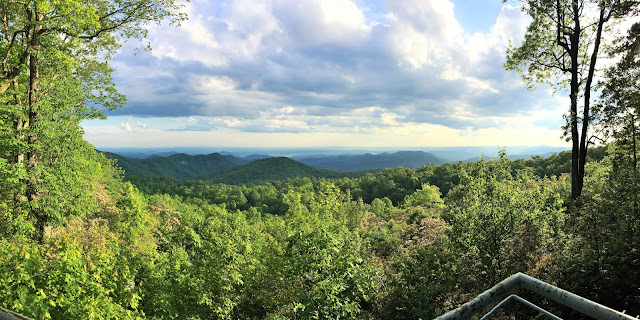 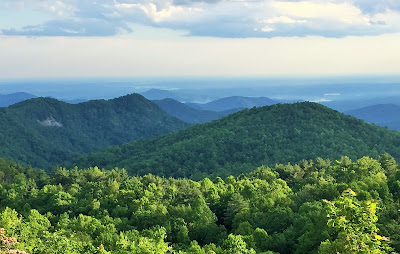 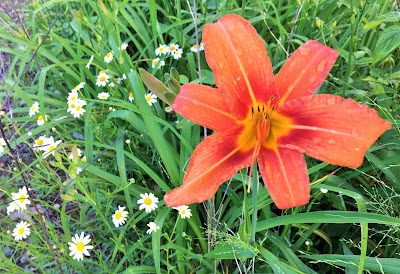 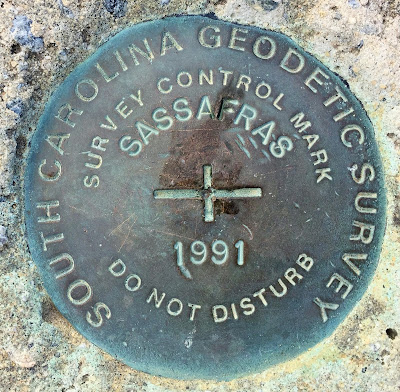 Sassafras
What is sassafras anyway?  According to the WWW, it is a deciduous North American tree with aromatic leaves and bark. The leaves are infused to make tea or Root Beer. Or in the drug world, Ecstasy or Molly is referred to as Sassafras, again according to the WWW. Ok. 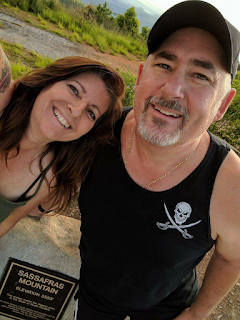 As usual, there was a fun geocache up here. 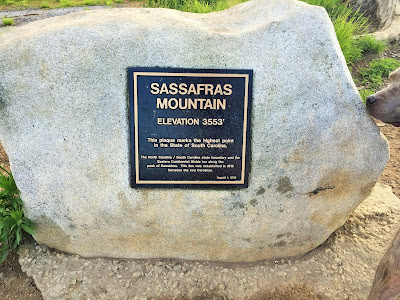 Sassafras.  I knew Sassafras was the high point, but I didn't know this spot also separated North and South Carolina.  Too bad they didn't have something more exciting to mark it so that you knew exactly where the border was.  Then you could stand with one foot on both sides.  Corny, but fun!  Nothing up here but a HUGE cell tower! 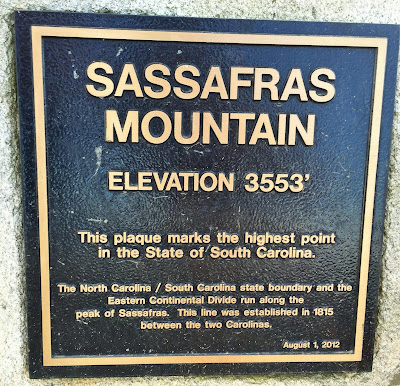 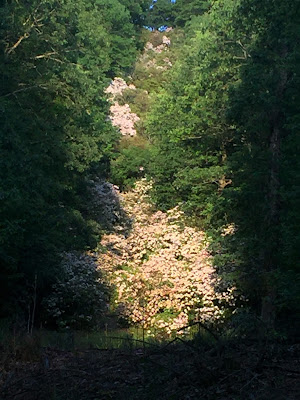 On the way down there was a clearing for a fire break that looked like a huge waterfall of flowers. The sun was going down quickly but it was shining just on this break in the trees. It was much more impressive in person that this photo shows. 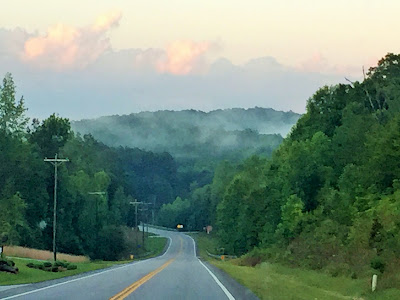 The rain came down for a bit and when it stopped the clouds would start to lift and made for a pretty picture or two. 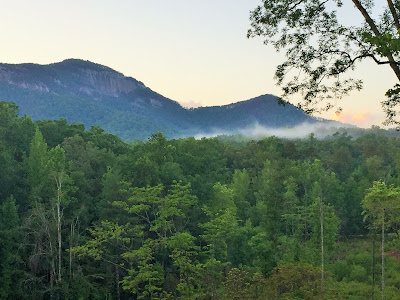 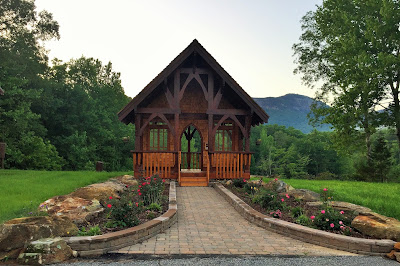 A cute little gazebo/outdoor chapel with mountains in the background would make for a nice outdoor wedding. 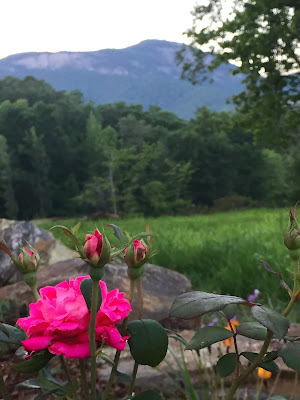 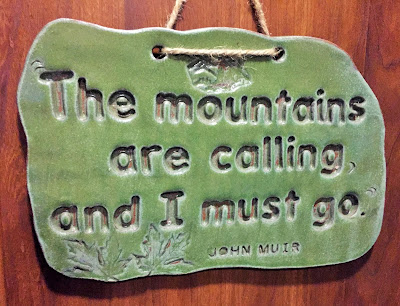 Steve knows this is my favorite John Muir quote, so he picked it up for me at a little farmers market.
I love it!
There are more mountains calling, so we'll head Down the Road to North Carolina tomorrow!
Posted by DebbieM