On our way to visit friends and family in the Prescott/Phoenix areas, we spent a few days in Flagstaff.  We had wanted to boondock just north of the city so we could visit the Sunset Crater Volcano and hike Humphreys Peak, the highest point in Arizona.  The internet reception in the areas we wanted to stay was non-existent, so we moved down into Flagstaff at Black Bart's RV Park. 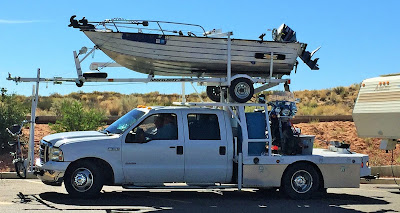 We always come upon some really amazing rigs. This one was a bit older 5th wheel being pulled by a really decked out truck.  They do some really amazing boondocking.  You can see the blue barrel behind the cab.  It is to carry extra fresh water.  They also had barrels for grey and black waste.  No toys were left behind.  They had bikes on the front, fishing boat up top and Harley in the back!
And on to the hike!  I've always wanted to hike the highest peak in each state, so I really wanted to conquer this one, but it got the last laugh. 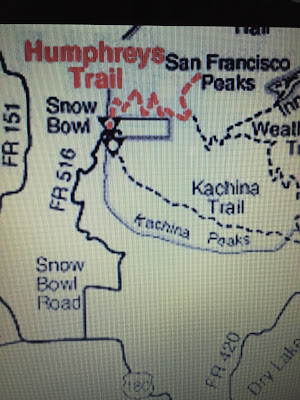 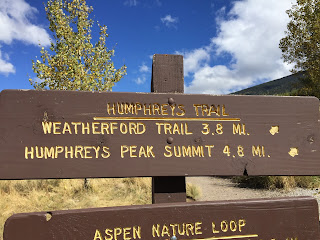 This trail leads to the highest point in Arizona and runs approximately 5 to 5.5 miles in length one way.  You pass through alpine forests,  huge rock slides and avalanche tracks along the mountain's slopes. Hart Prairie stretches out at the base of the incline and the Grand Canyon is visible on the horizon. (although we did not see it, more on why later!)

Humphreys Trail is steep and long and extremely rocky. You have to be careful above the treeline as it can snow during any month of the year and in summer monsoon storms can bring lightning. We were lucky to catch the Aspen in full color. 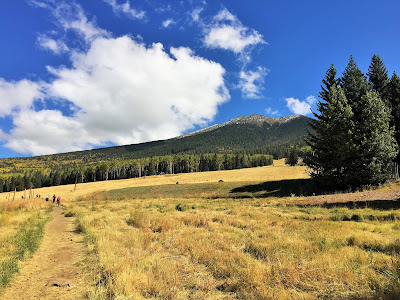 It starts off harmless enough across a pretty meadow. You can see the peak in the back. (above) 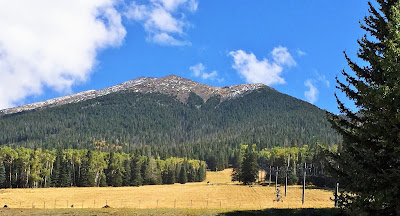 Looking down the sloping meadow is a huge grove of Aspen. 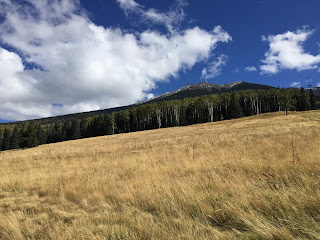 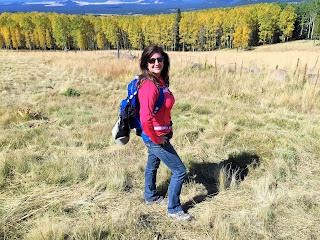 Once we got into the trees, we found a lot of blow down and had to crawl over and under some of them. 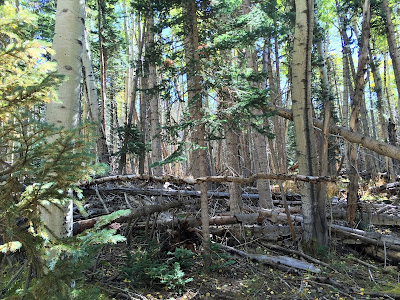 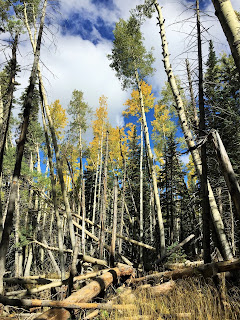 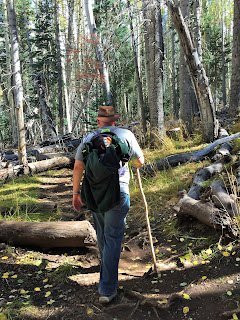 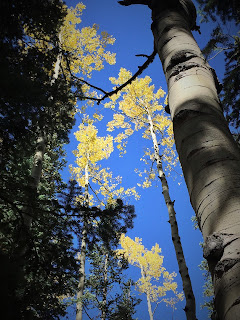 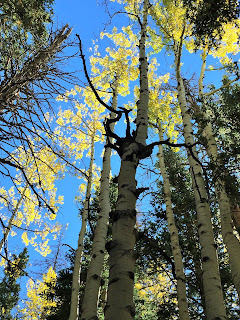 9
This was the nicest part of the trail.  It definitely is a very steep trail and as you got above the Aspen, the trail got rockier and rockier with very few smooth parts.  Good sturdy hiking boots with ankle support are very important to wear. 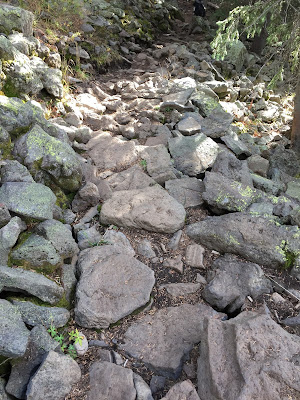 That is the trail.  These rocks were about the size of your foot.  Difficult to walk on the un-even surface. 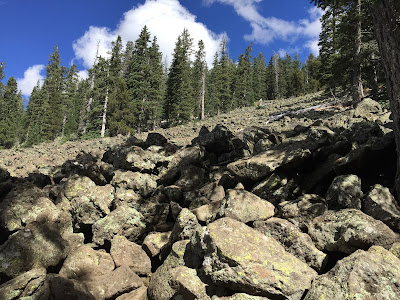 One of the lava rock avalanches. 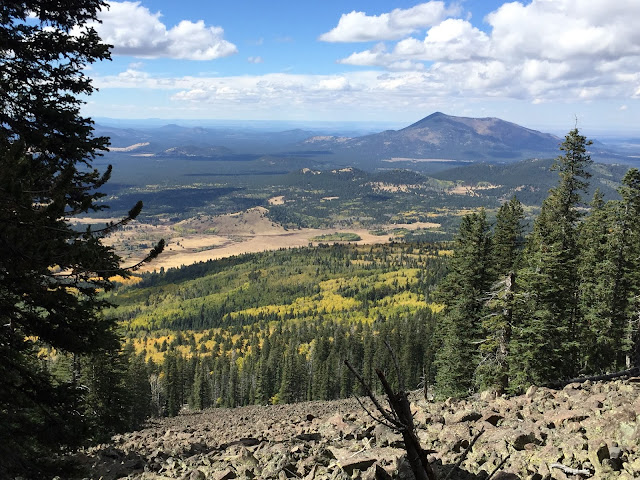 Looking down toward the valley floor. 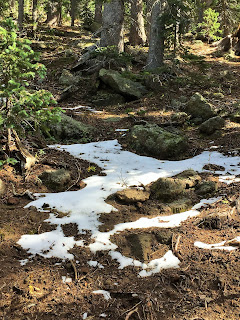 Here comes the snow. This was about 8000ft.  I was surprised how many people were on the trail.  It really slowed us down to have to move to the side and let people pass going both up and some down.  We took more breaks as the straps on my camelback were starting to dig into my neck and giving me a headache. There weren't many views to see through the trees and the trail was getting more difficult.  We had to watch our time to make sure we would have enough time to get back down before it got dark 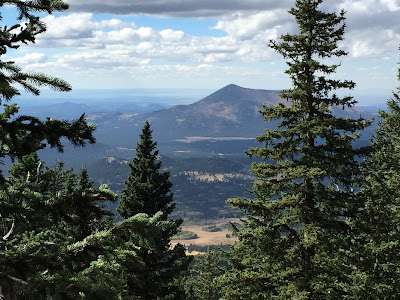 One of the few spectacular views.

We had passed a few people that had developed altitude sickness too.  Some had to turn around and head back down, some were throwing up on the trail and some were laying down along the trail trying to sleep off some of their illness.  I felt so bad for them. 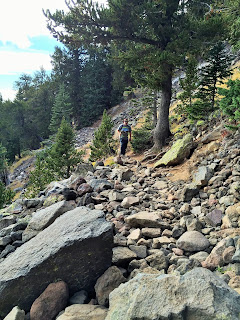 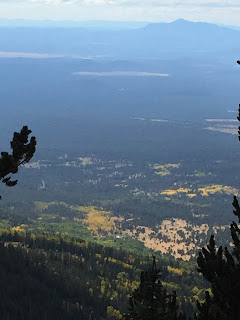 Well somewhere around 3pm we reached our turn around point.  We were surprised that we were not making as good of time as usual.  By this point my pack was causing a lot of stress on my neck and my head was pounding.  Then I felt the first wave of nausea.  It finally occurred to me that it was my turn for altitude sickness.  Back in California I'm used to hiking between 6000 and 9000 ft in elevation, but this caught me off guard.  It was worse when I stopped, so we tried to keep our pace on the way down.  I LOVE hiking.  But not today.  It was just miserable and I could not wait to get down.  We had about 3 hours to go. 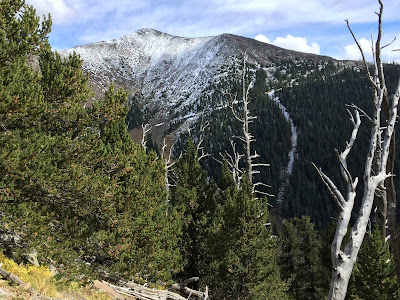 The last view we had before turning around just before the saddle around 12K elevation. I'll fast forward.  I don't think we ever made such great time getting off a mountain.  Unfortunately, that made the altitude sickness worse.  I barely made it to the truck and was sick a few times before we drove the rest of the way down the windy road and back to camp. Took me a couple of days to feel better.  So, how did I like Humphreys Peak?  Hated it!  Would I try a repeat?  NO WAY!

Back to Black Bart's RV Park.  This was a medium sized private park.  Not our preference, but it worked.  $36, 10% off with Good Sam discount, full hook-ups.  Sites need a lot of work.  Concrete was badly cracked and broken.  The laundry was nice and they had a fantastic steak house.  Great internet and cell with some short easy hikes behind the park.

Never did make it to Sunset Crater.
Posted by DebbieM