Columbus, NM
Pancho Villa State Park
Don't you just love it when you have the opportunity to have breakfast out with friends?  Well it just so happened that as we were leaving the Las Cruses area driving south, our RV friends were doing the same but driving north.  So of course we stopped half way and had breakfast at Cracker Barrel.
We met Guy and Sue of Our Rovin Journey in Tennessee at the RV Dreams seminar.  We are all part of the "Class of 2014", meaning that at the time of the rally this group of about 15 couples that were currently just dreaming of hitting the road fulltime actually DID.  We haven't seen them since April of last year.  It was great to see their beautiful 45' Monaco Class A.  Just gorgeous!  Guy just retired and they are enjoying it!  We had a nice time catching up and then were on our opposite drives headed out.

On our way to Columbus, NM to meet up with Curt & Glenda, another grad of 2014, we drove through the tiny town of Hatch.  We didn't know it at the time, but Hatch, NM is the Chile Capitol of the World.  This very funky, little restaurant is obviously very popular.  Hatch is kind of off the beaten path but that doesn't seem to stop folks.  There were a lot of bikers, families and others there. 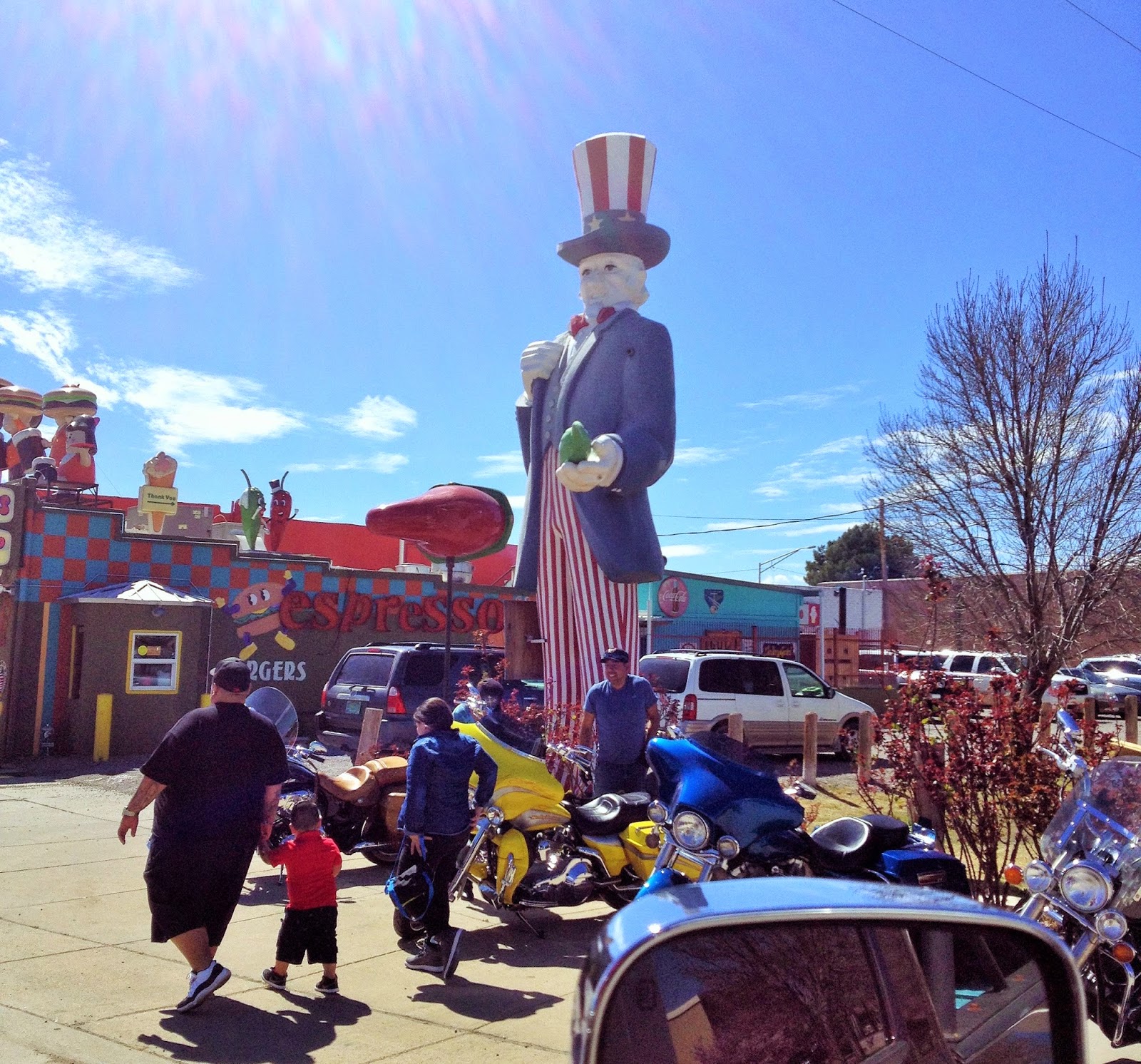 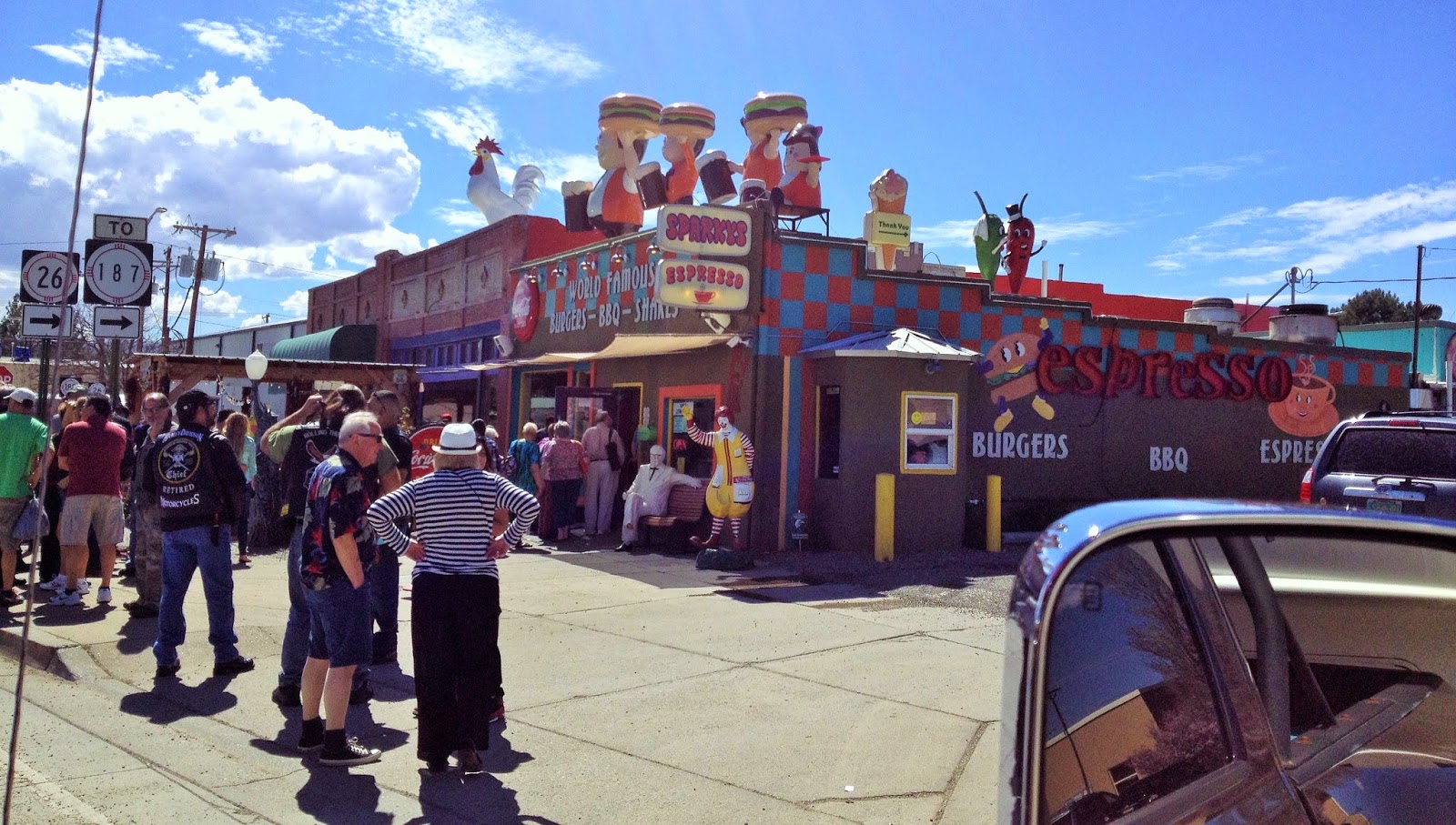 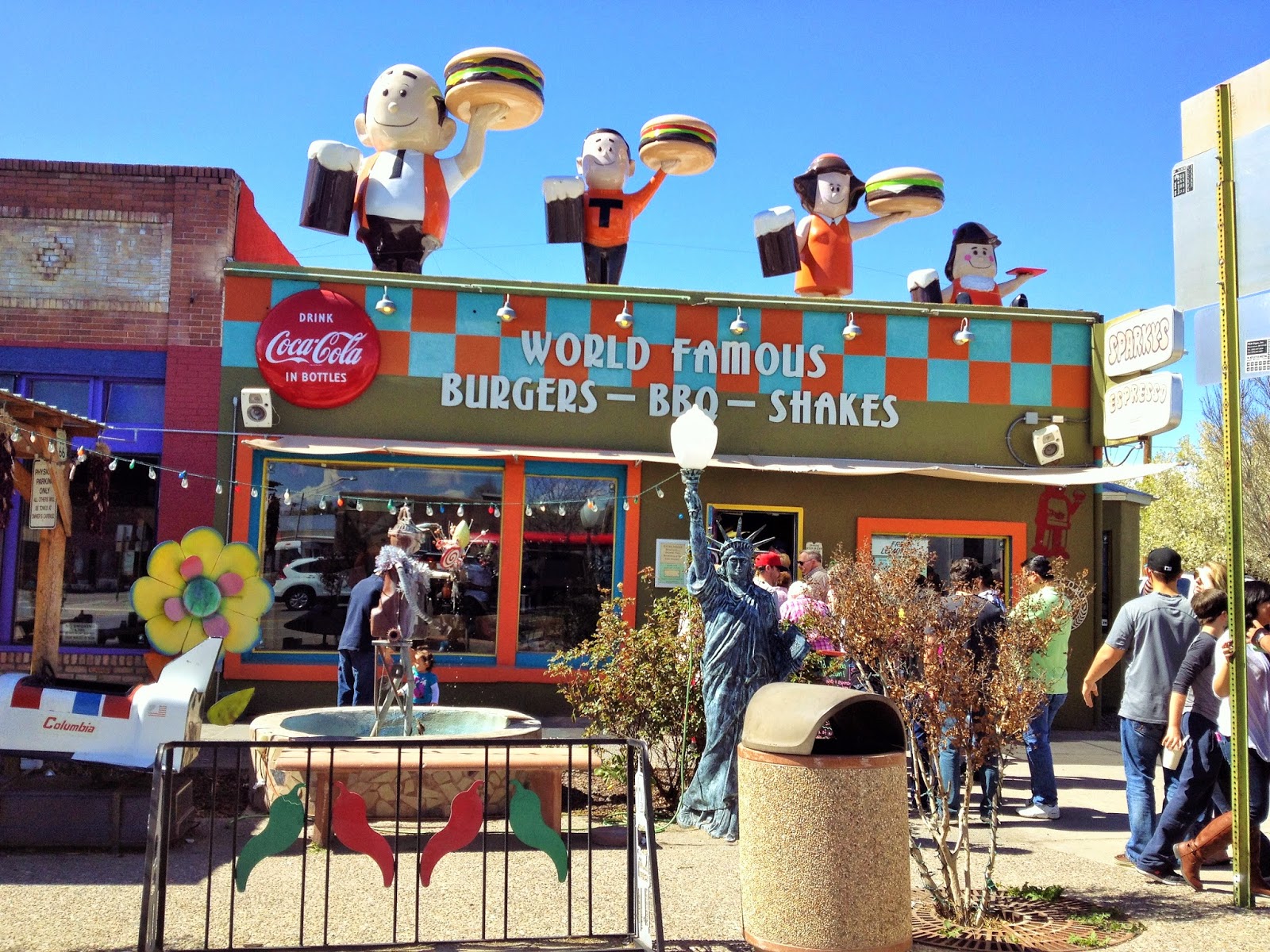 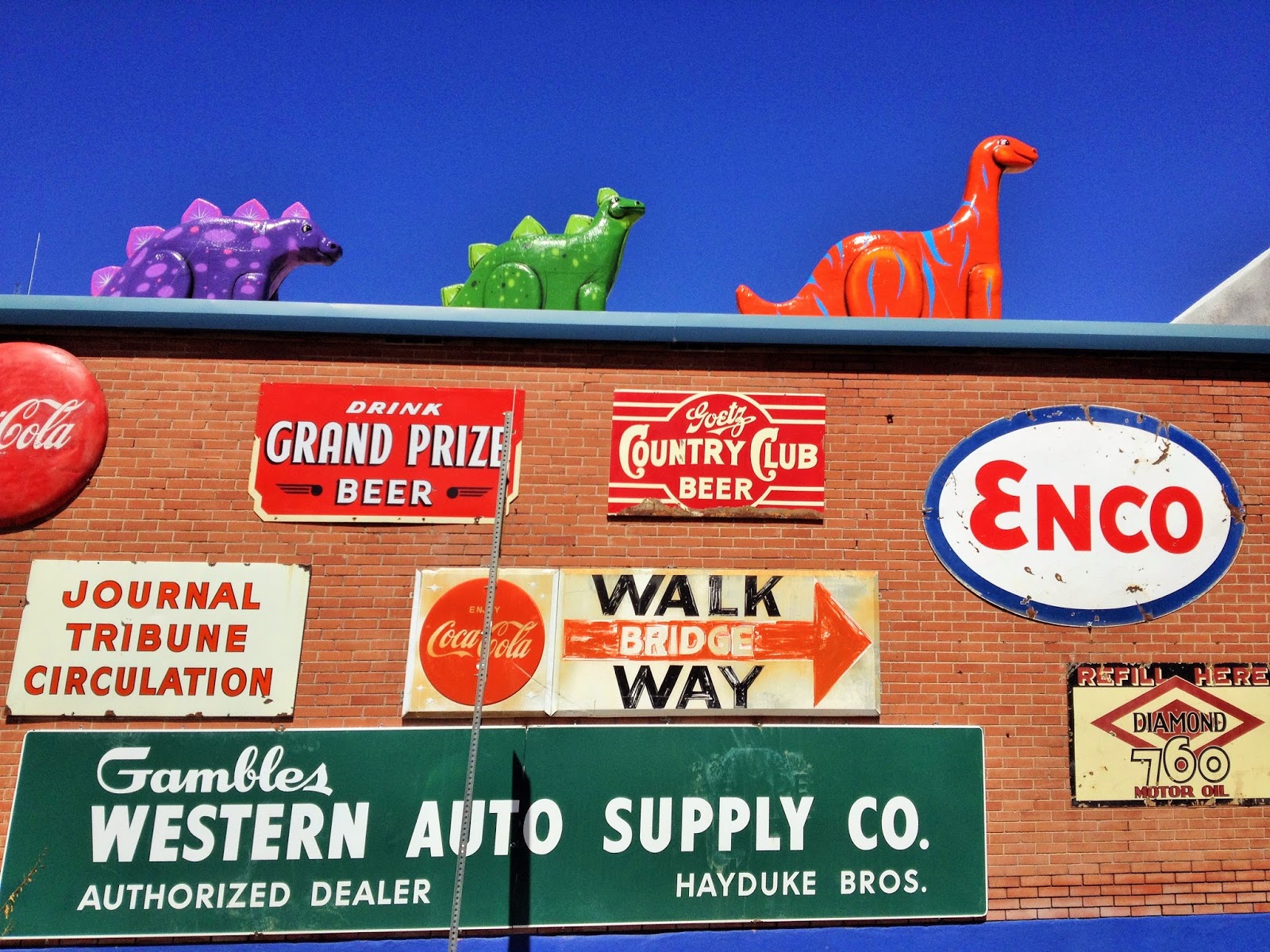 Now on to Columbus where we will be meeting up with Curt and Glenda of  Camp Lowry.  Also 2014 grads who we've spent time with before.
First on the agenda was dinner.  The town of Columbus is named after Christopher Columbus and has about 1600 residents.  Not much here in this tiny border town, but we did find a great place to have some, what else, Mexican food at La Casita.  It sure was good.  Everything homemade and the dining area was about 15'x15'. 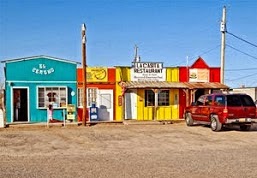 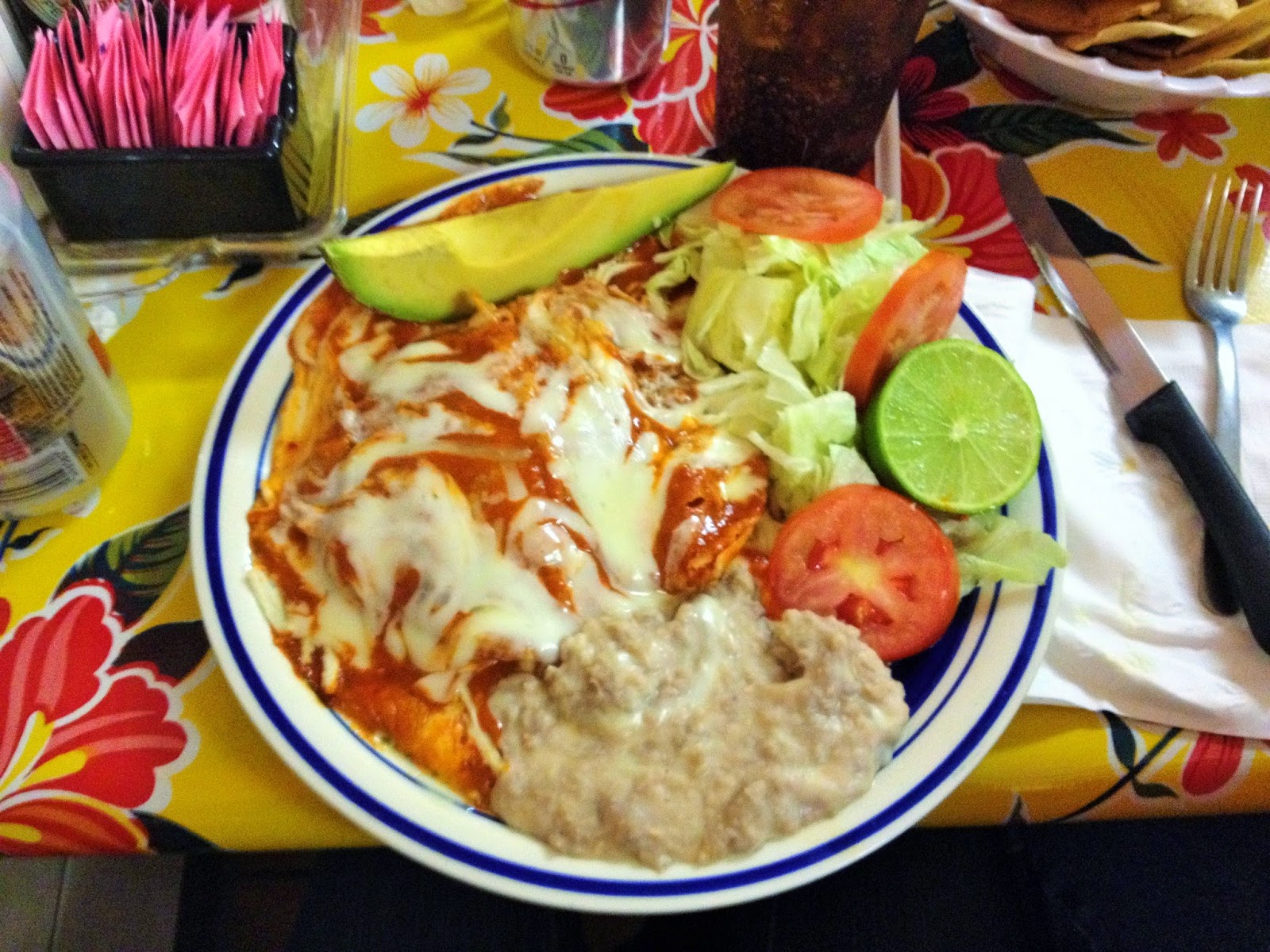 I knew Karen & Steve were also in the area and I was happy they were still in the campground when we arrived.  They have a wonderful blog full of their home renovations in Wisconsin and their great road trips in the big motorhome with 2 cute shelties.  While we were excited to meet her (I've been enjoying her blog for months) the reason they are still here is probably not as exciting to them.  Read about what happened to them here.  Their blog is RVing: The USA is our big Backyard 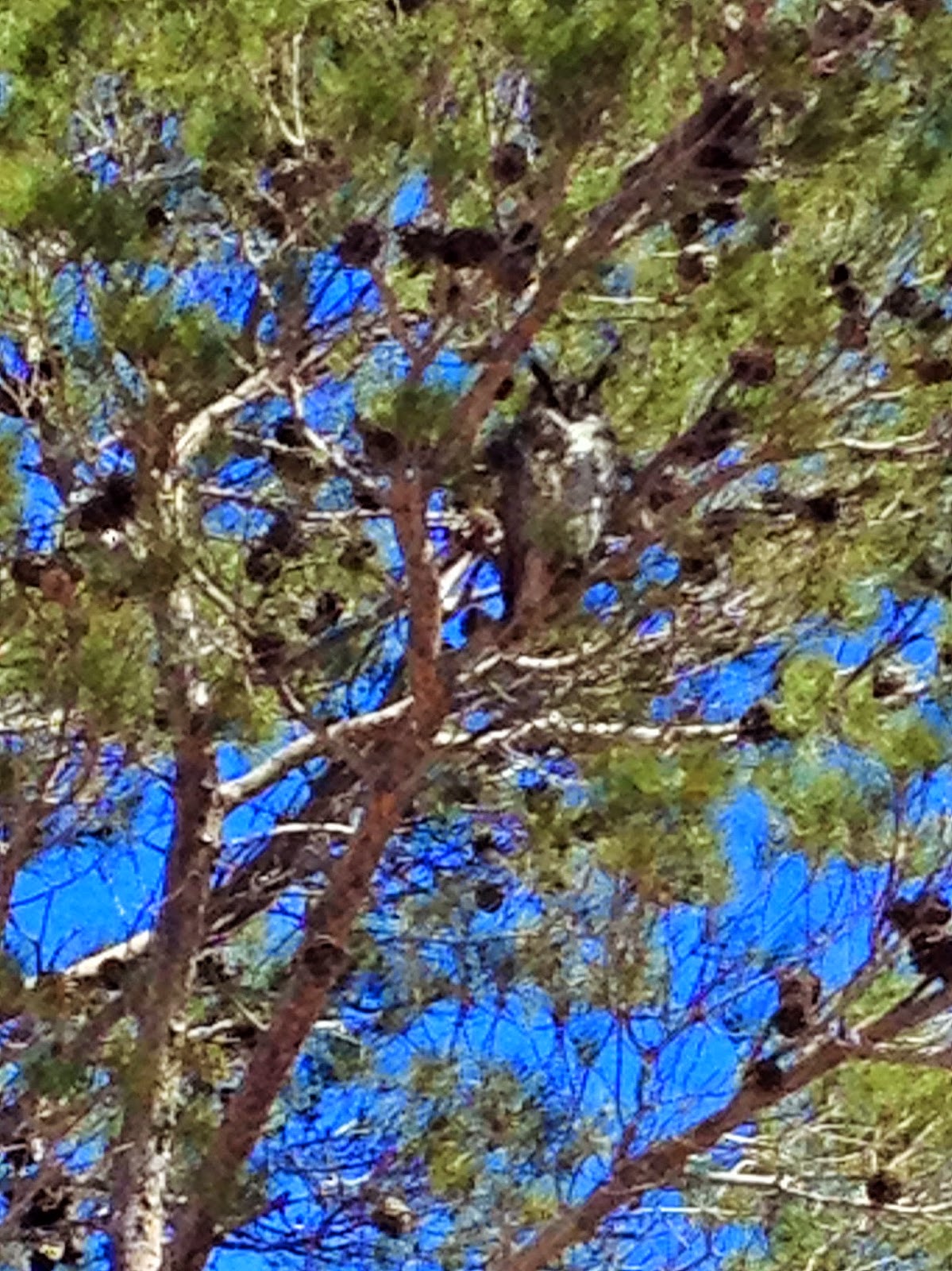 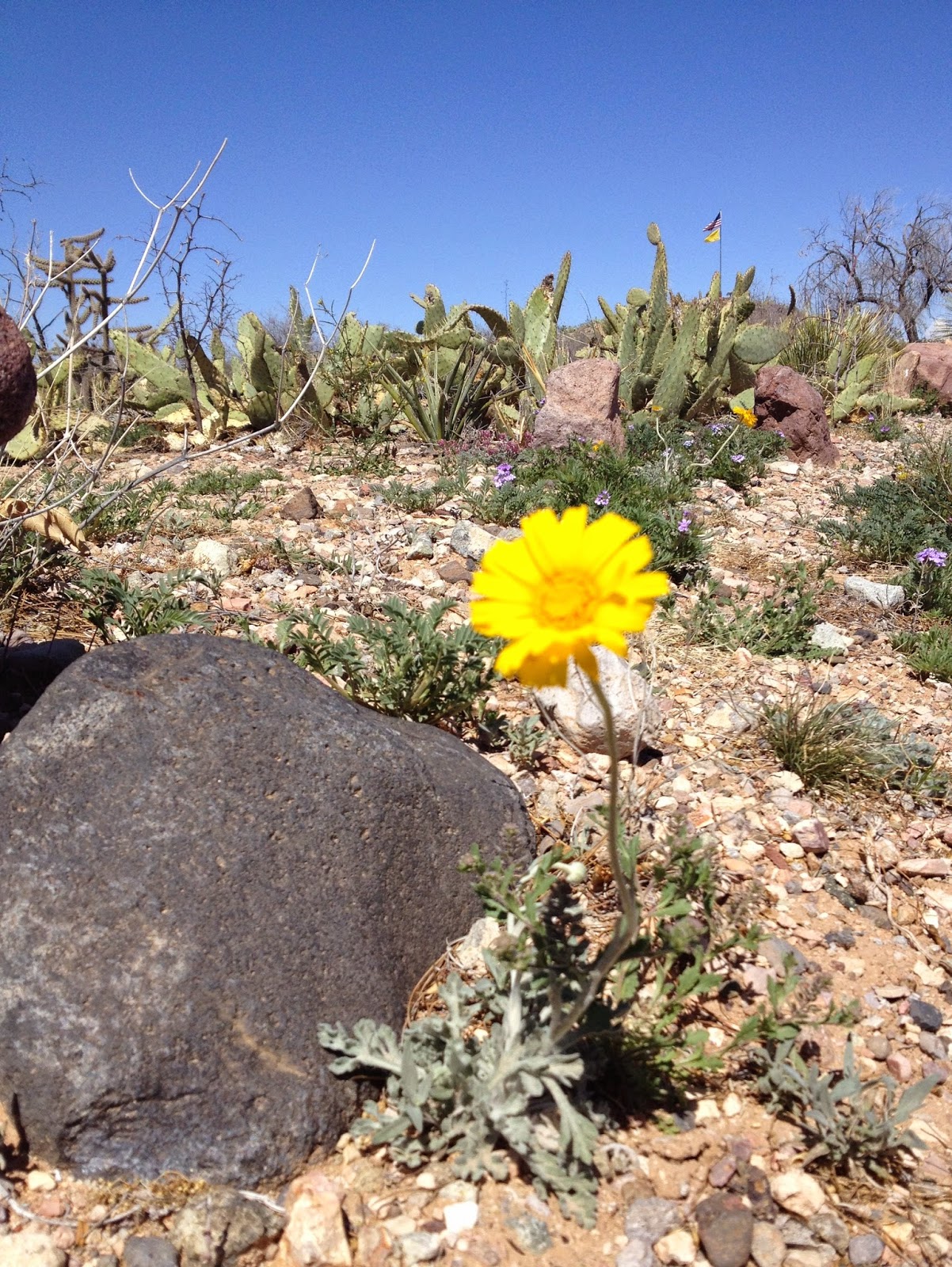 Karen showed us where the Great Horned Owls were nesting at.


Steve was really looking forward to crossing into Mexico for some good food and cheap shopping.  We found out that we only needed our drivers license and a copy of a birth certificate or passport to cross over and (more importantly) to get back in!  Curt and Glenda were excited to go too (well, maybe not Glenda so much at first).  We made sure to triple check with the border agents that we really could get back in with the identification we had and they said no problem.  So, off we went.

It was very easy actually.  We parked for free on the US side and just walked across.  The Pink Store is a well known restaurant and store.  We had a great lunch there and walked through the store.  They had many painted clay items, clothes and jewelry.  Many come here for very inexpensive dental, glass and prescriptions. 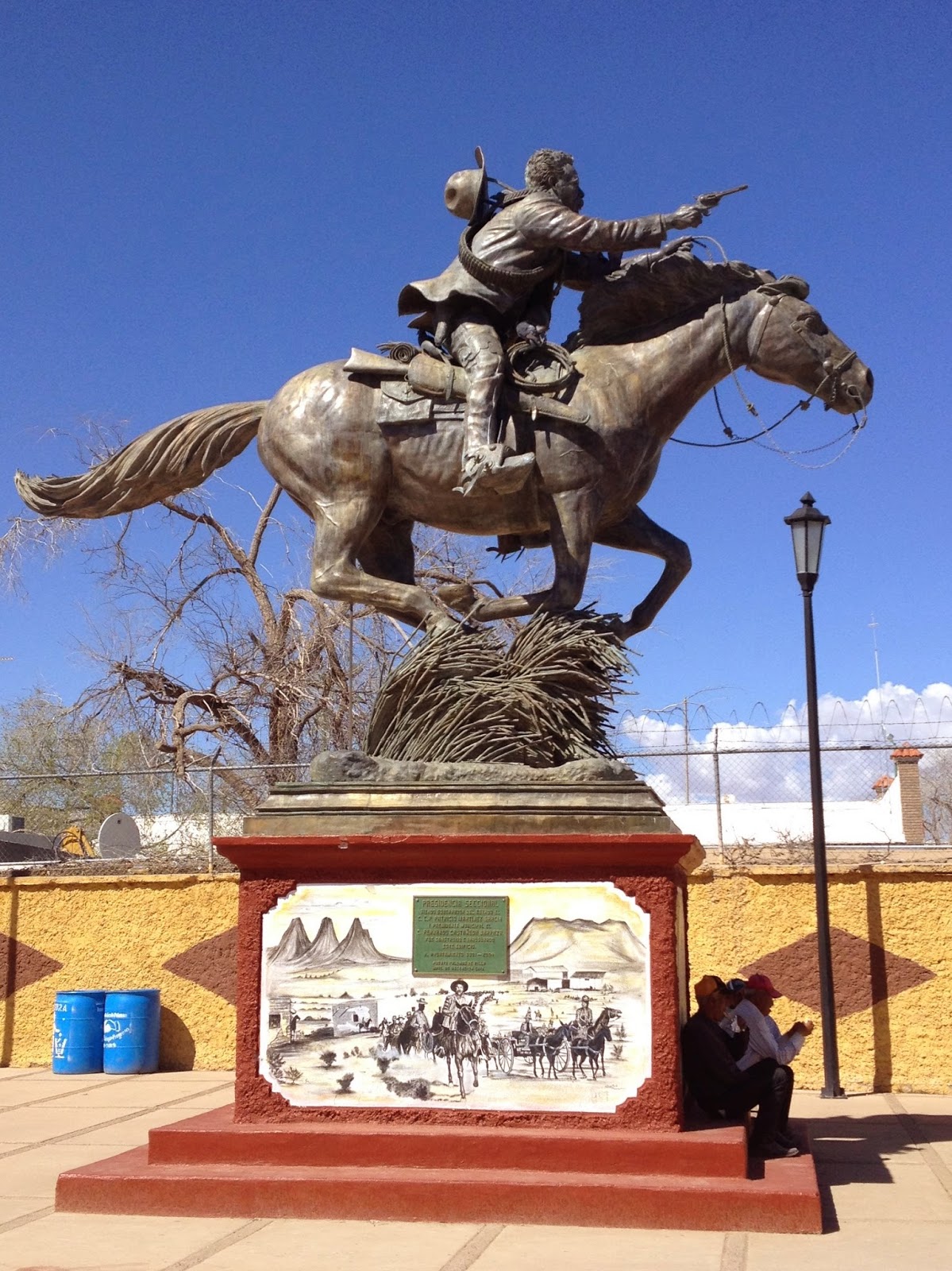 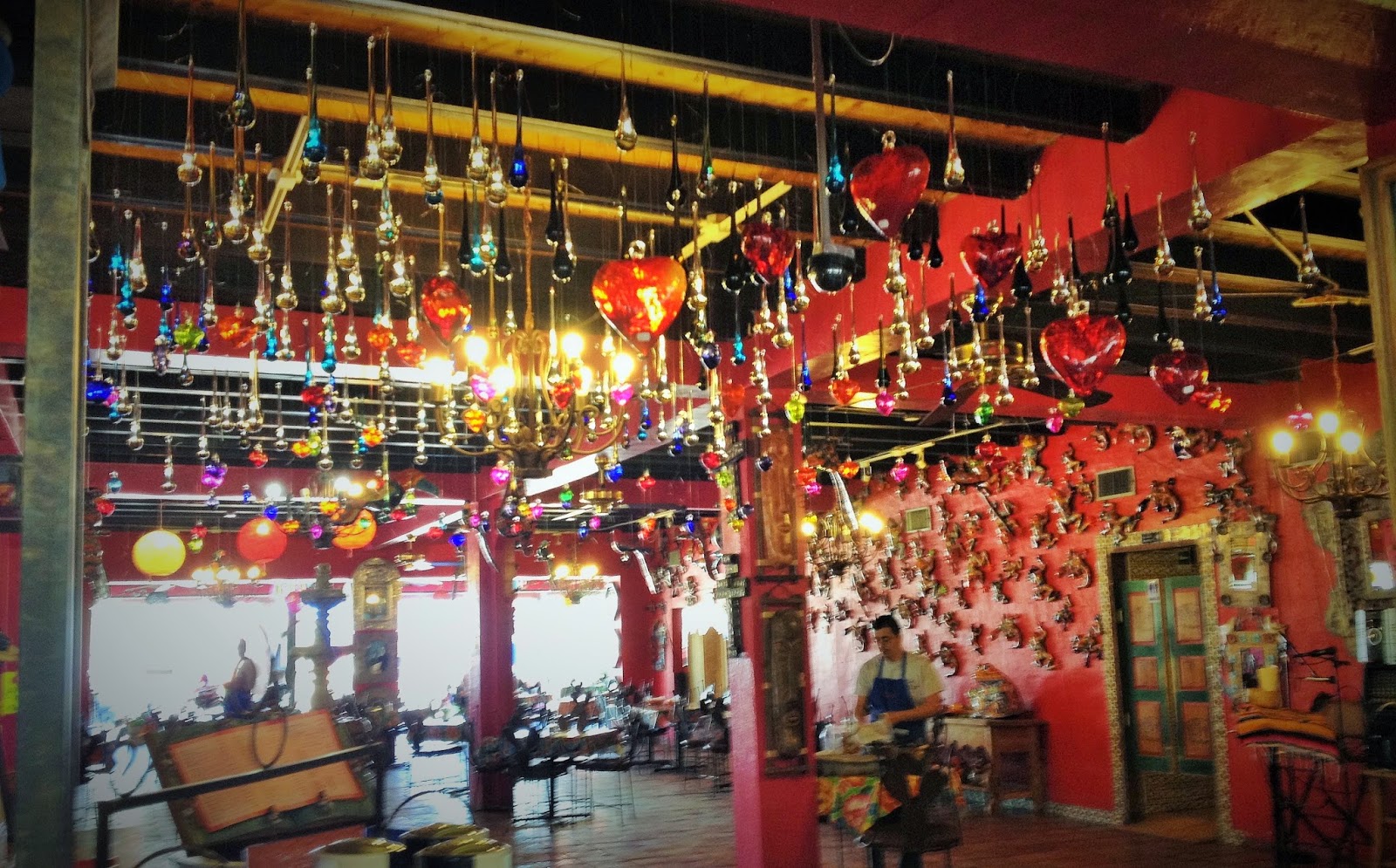 Back inside the Pink Store is the entry with lots of hanging glass hearts.  We had a great lunch of Garlic Shrimp and Rice which one of the Park Rangers suggested we try.  Amazing!  We also had some cards for free margaritas that Karen had given us.  Thanks Karen!!  They were yummy. 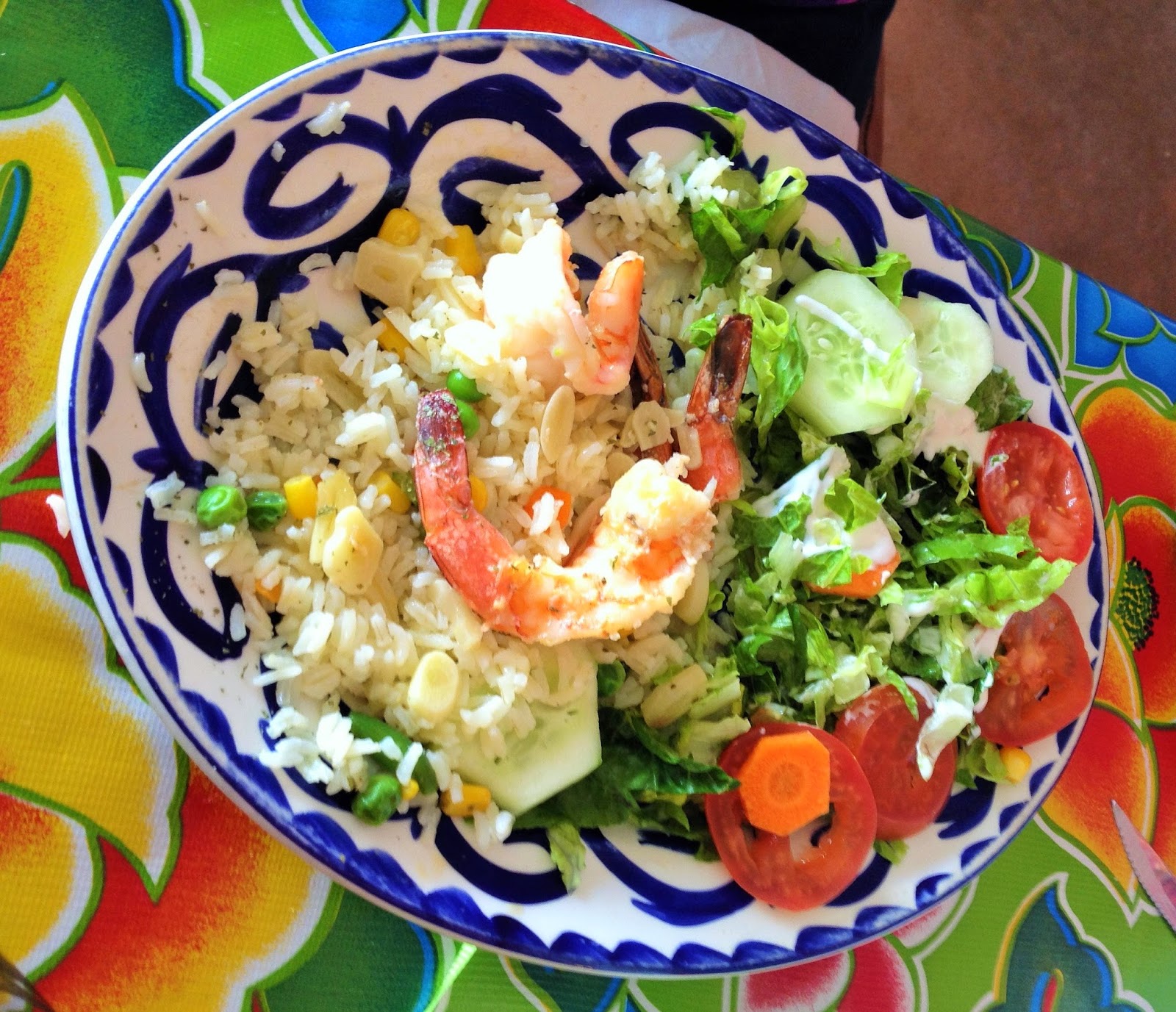 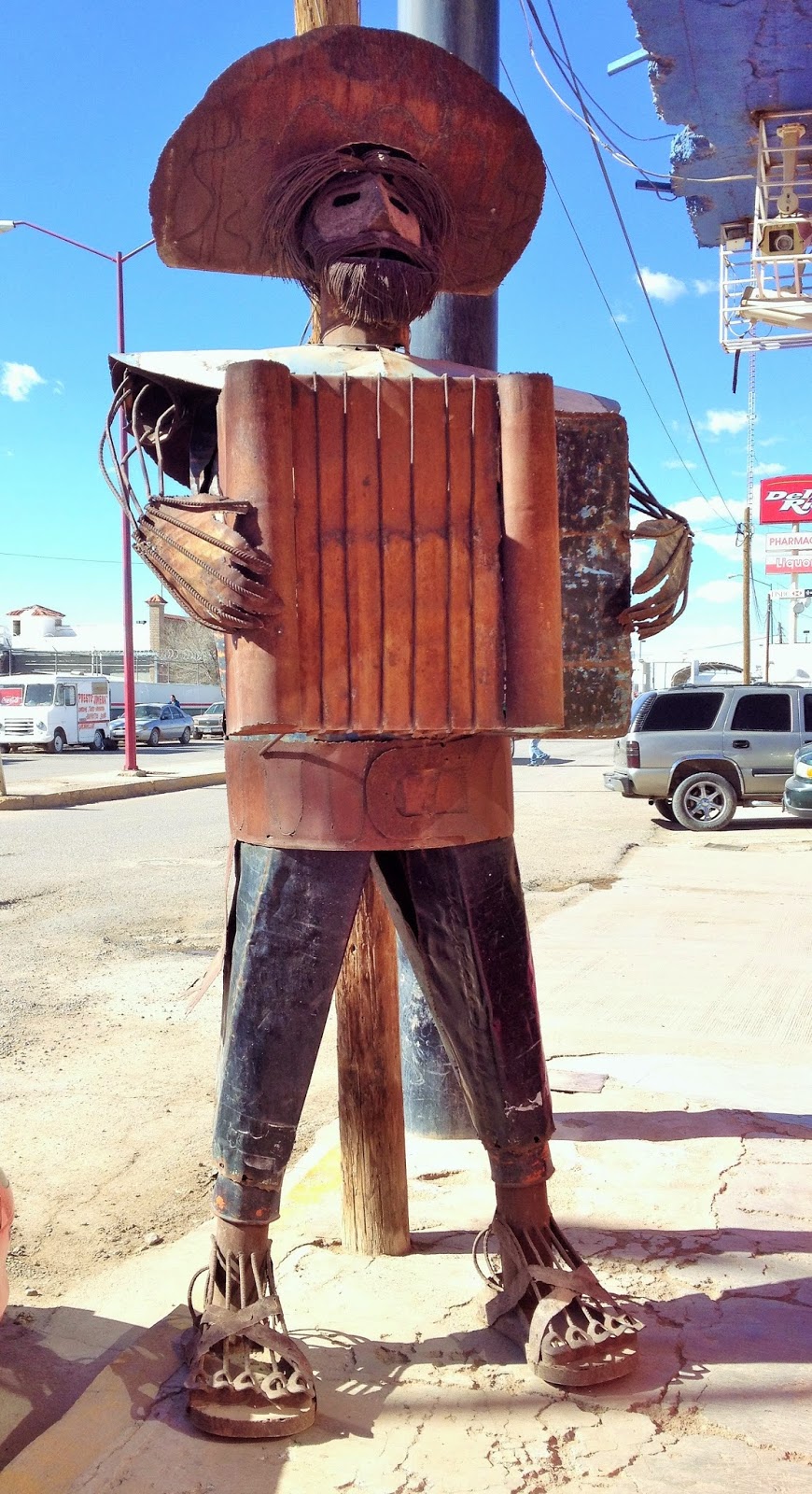 After our meal we walked around a little bit.  It's not really a town you want to wander the back streets or be at night.  But it was nice during the day. 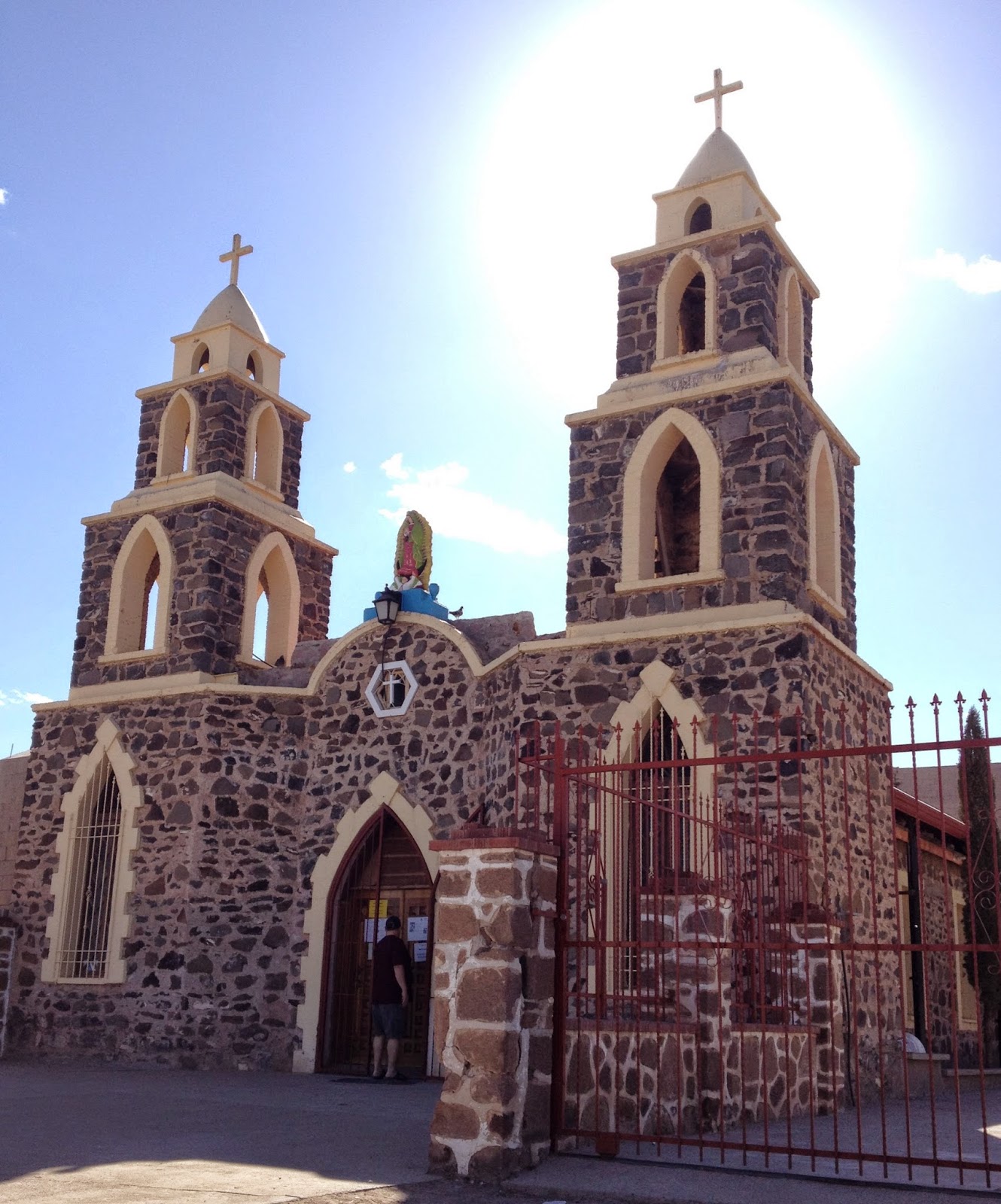 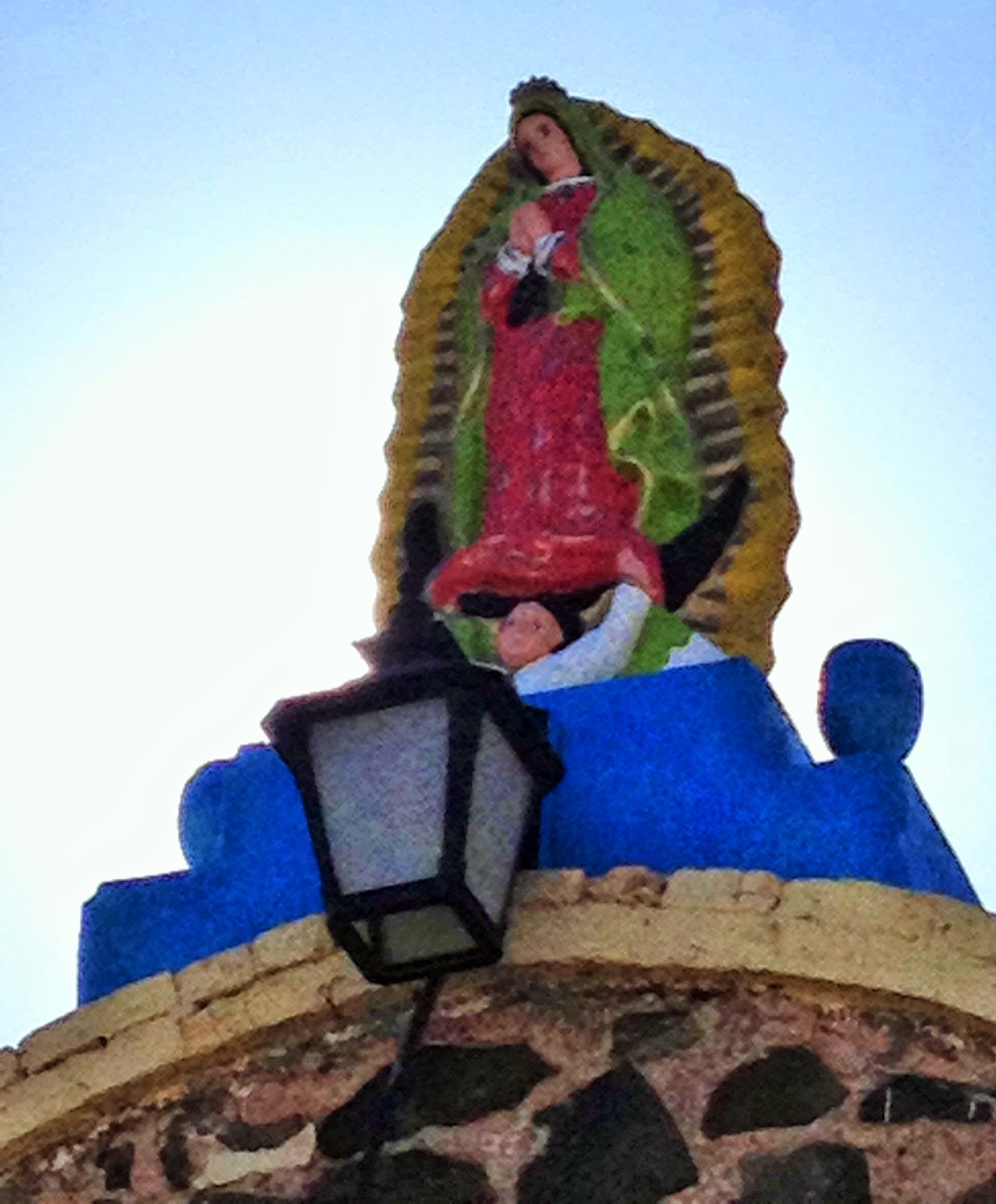 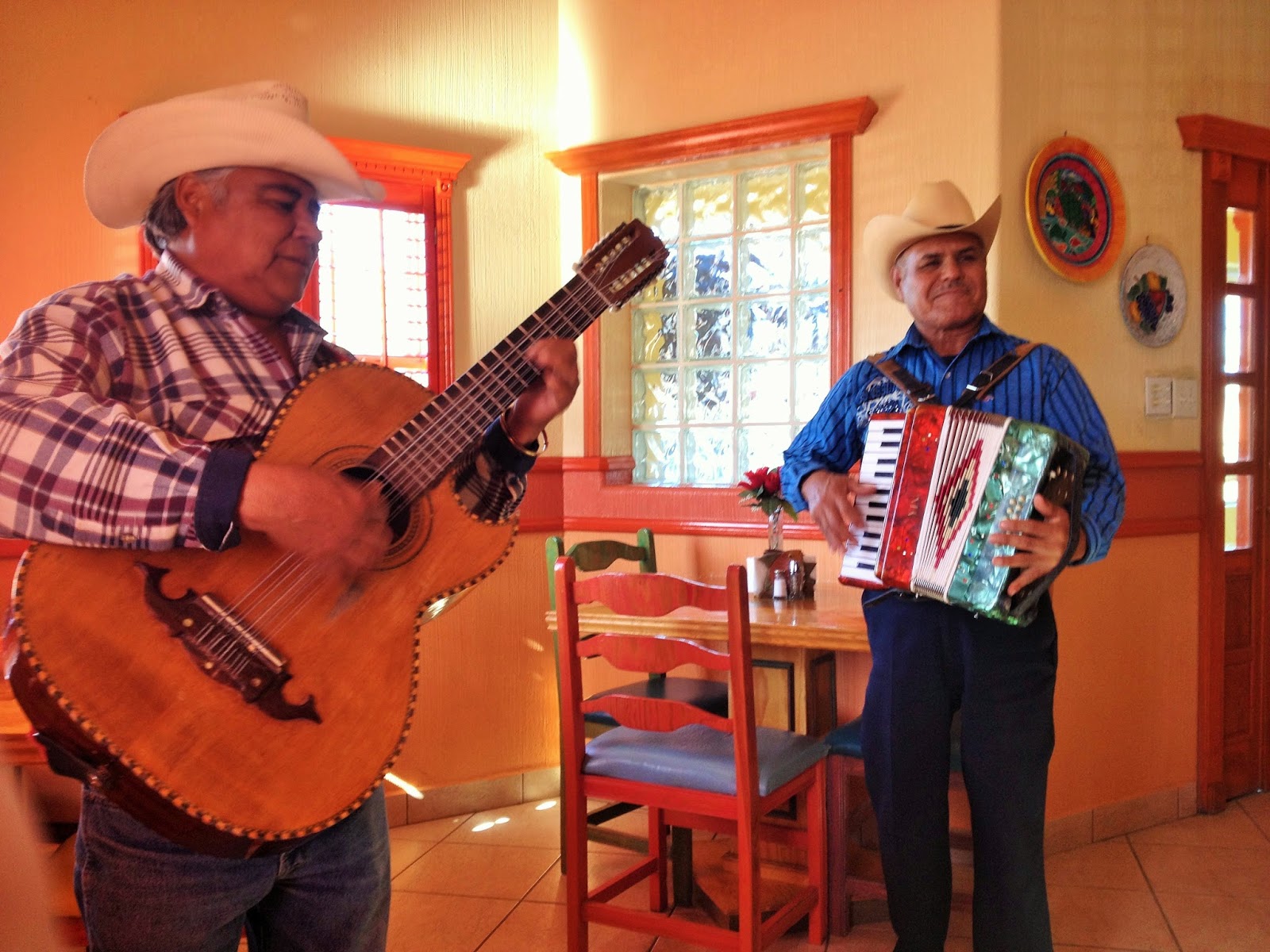 There was no way we could pass by this little café and not have another meal!  So we did.  A light dinner.  We were even serenaded by these nice gentlemen who played 2 great songs for us.  Hard to imagine that the tip we gave them is probably their main form of income. Another day while Steve was working, Curt, Glenda and I went to hike Tres Hermanas (Three Sisters) Peaks.  The same ranger who recommended the Garlic Shrimp, gave Curt a great map with directions through the BLM land to get to the mountains.

There is no trail, so we had to bushwhack our way up after we left the sandy road. 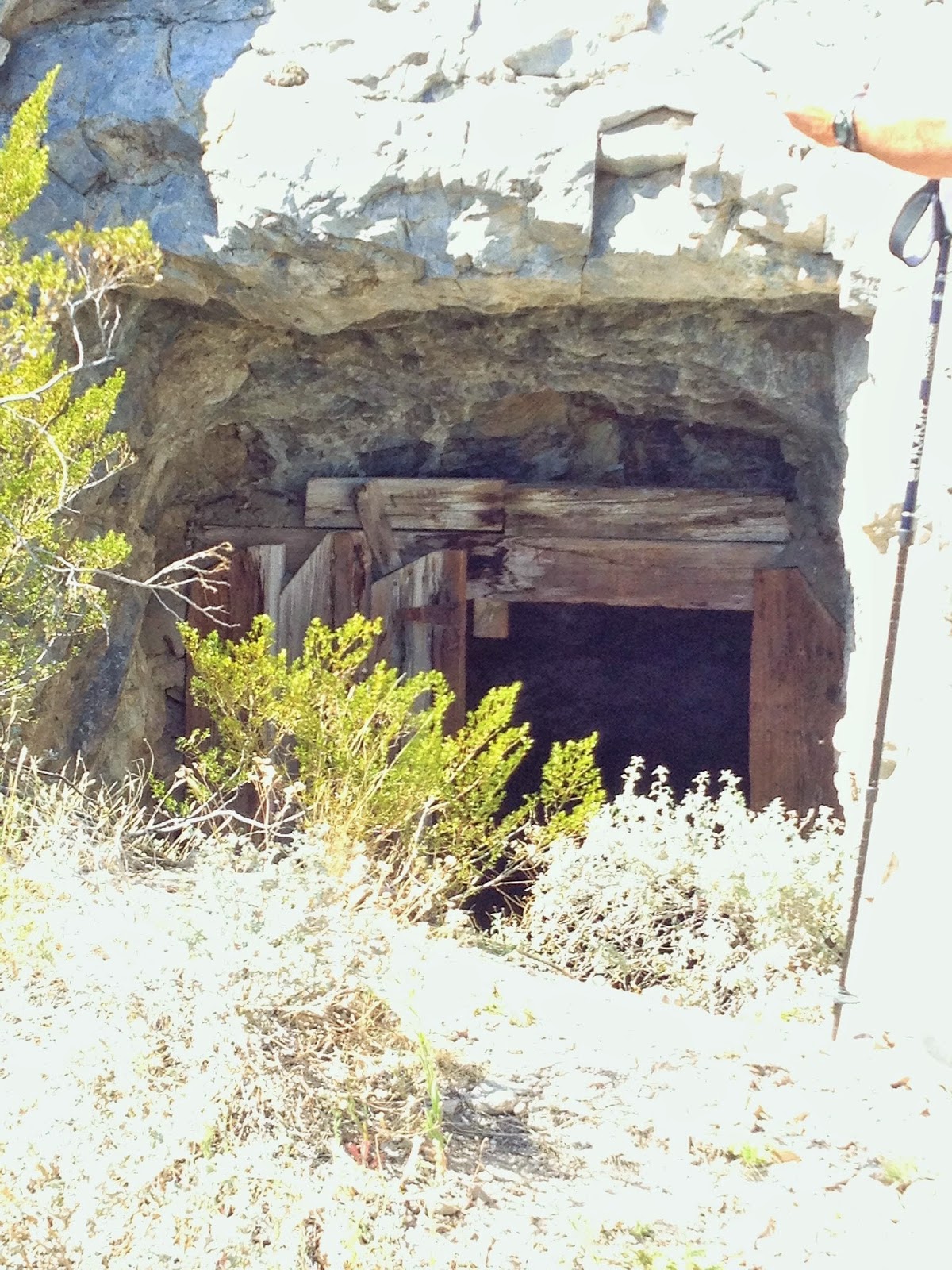 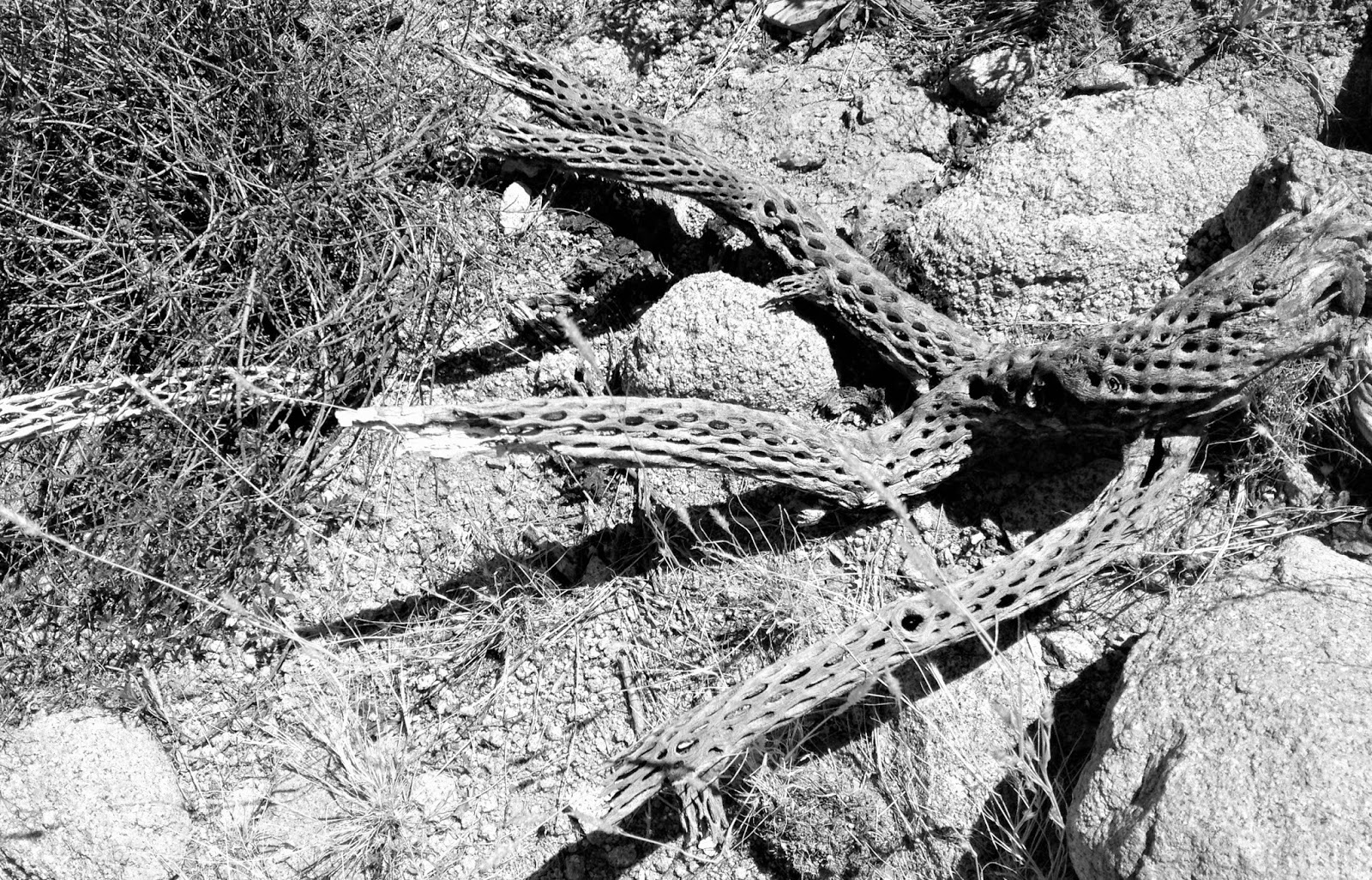 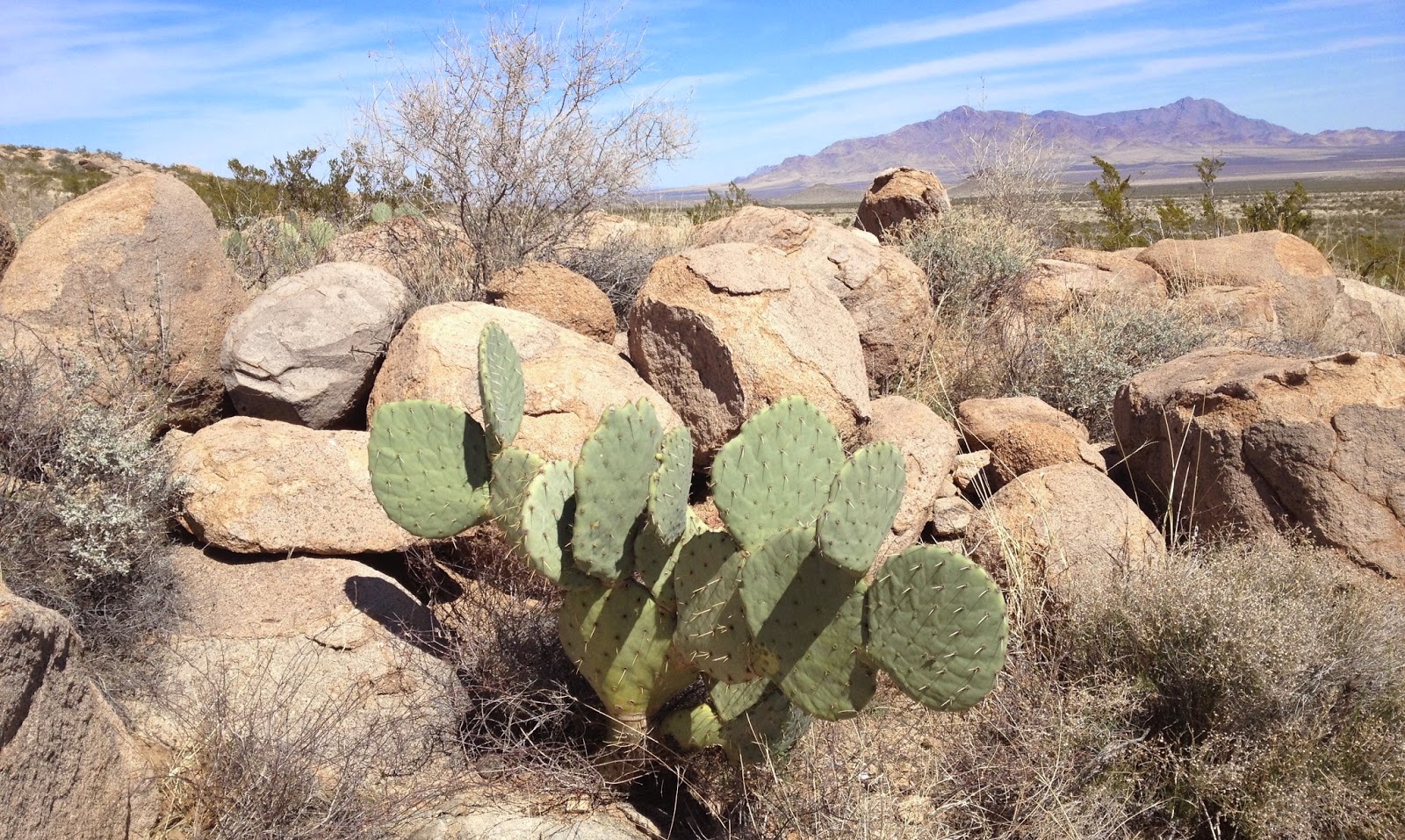 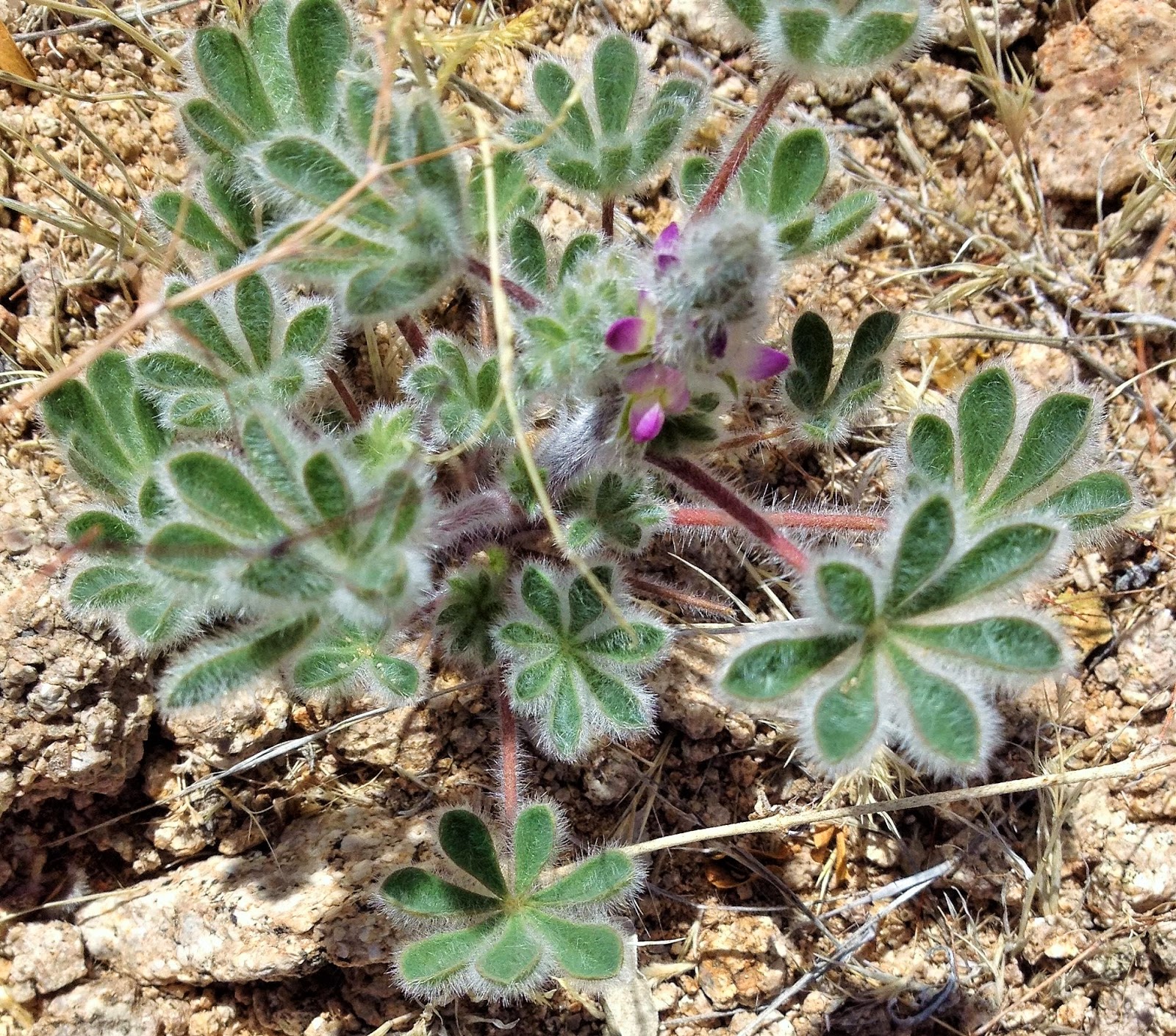 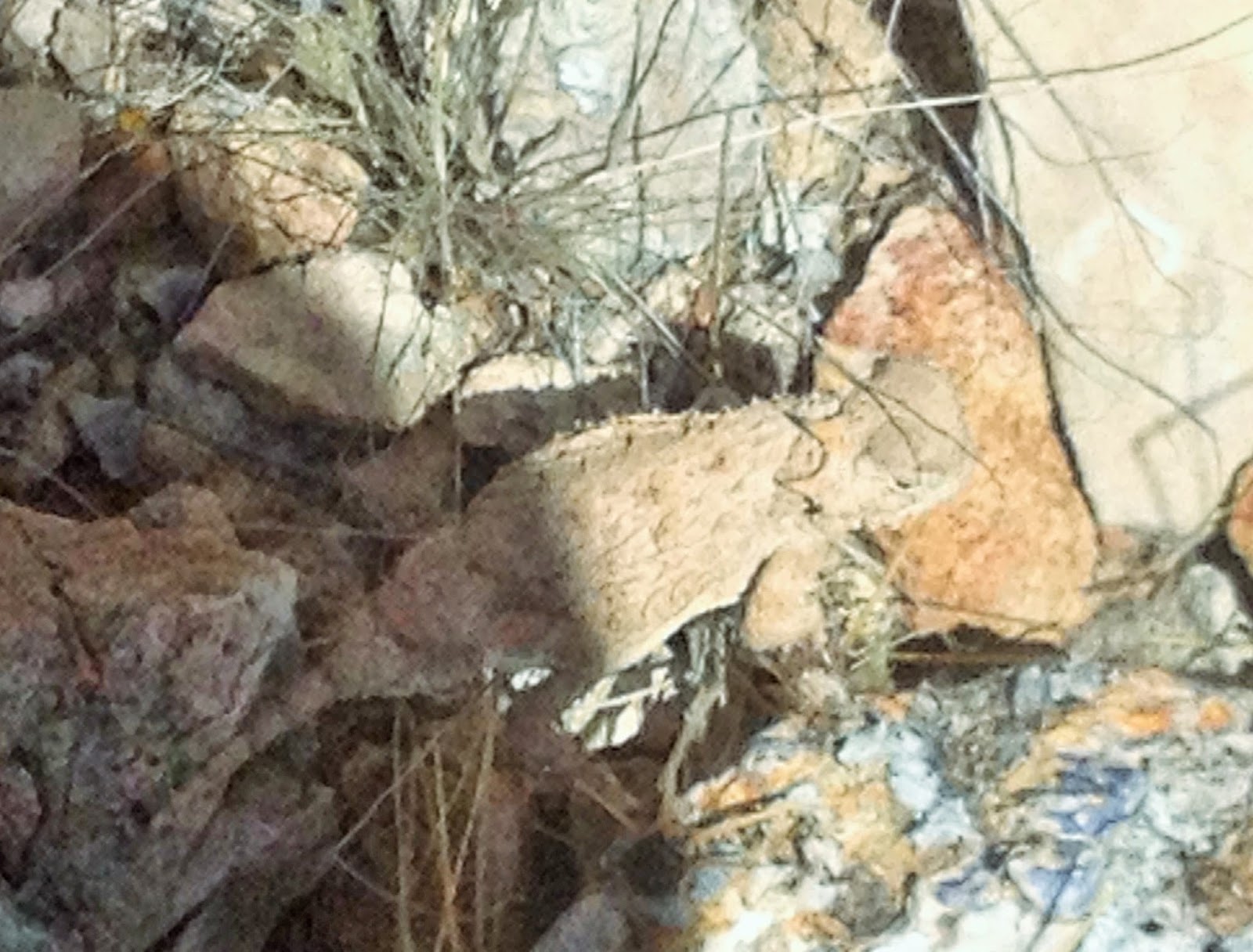 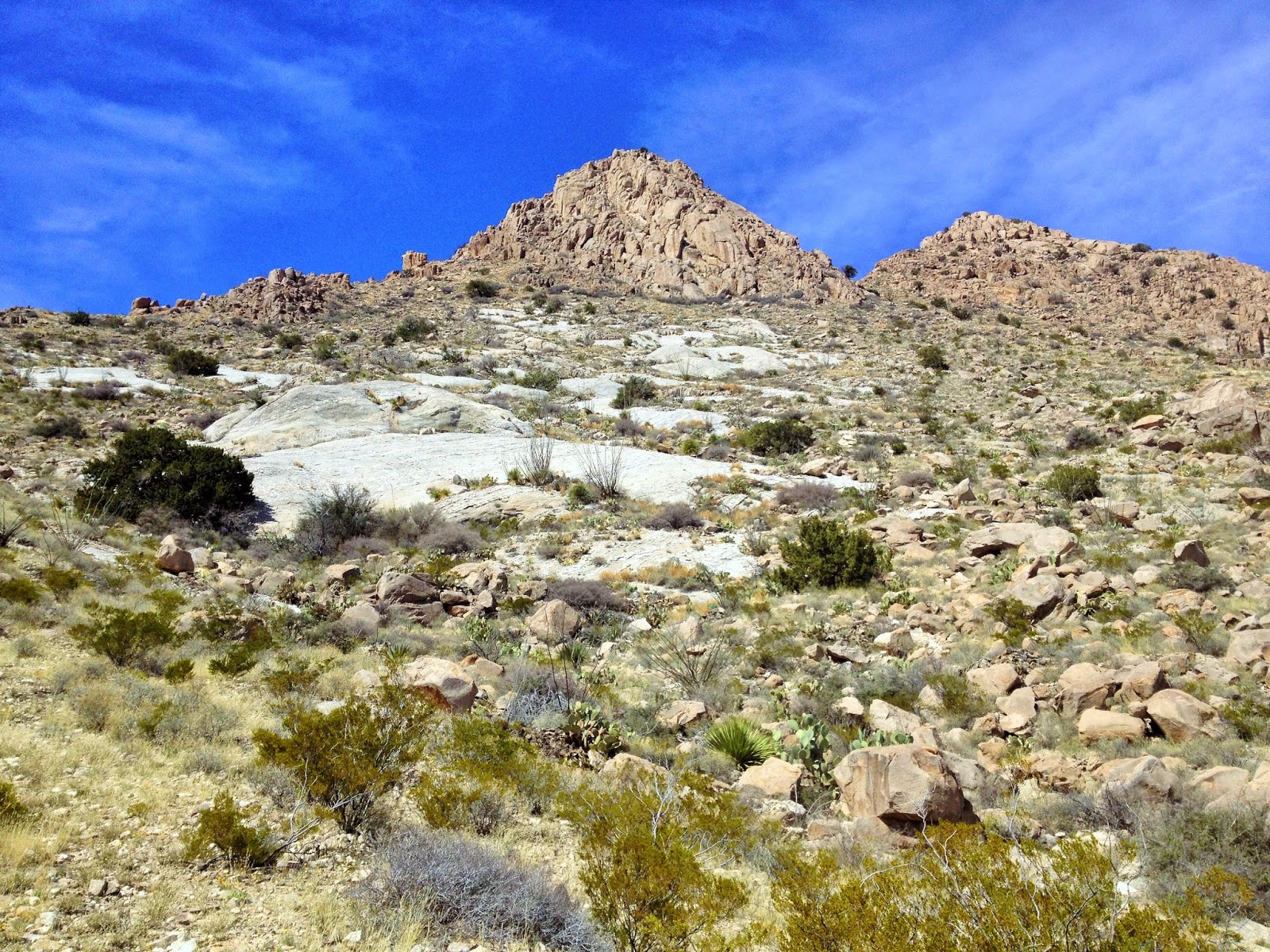 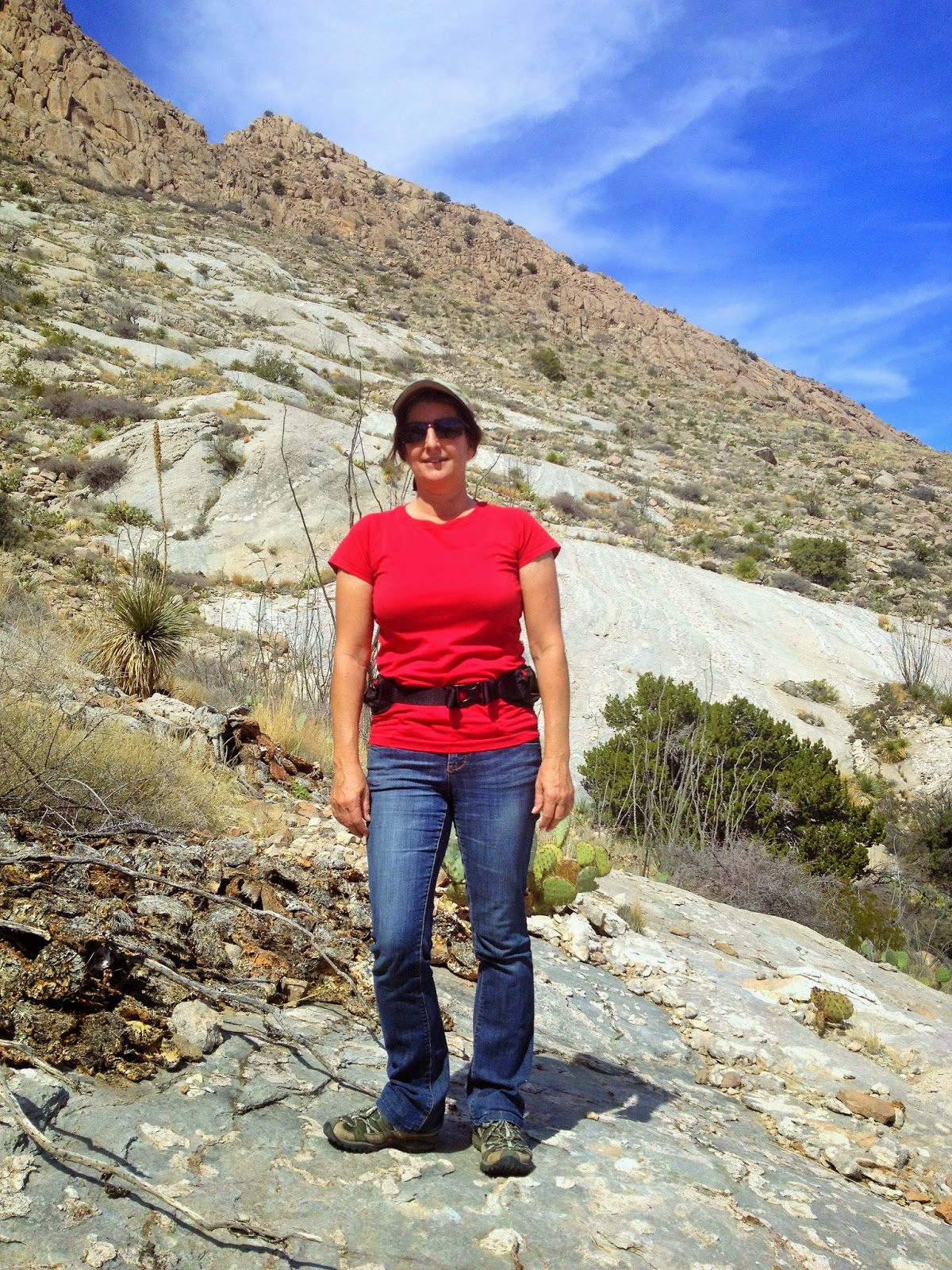 We didn't make it all the way to the top but we had a great hike with a great view! 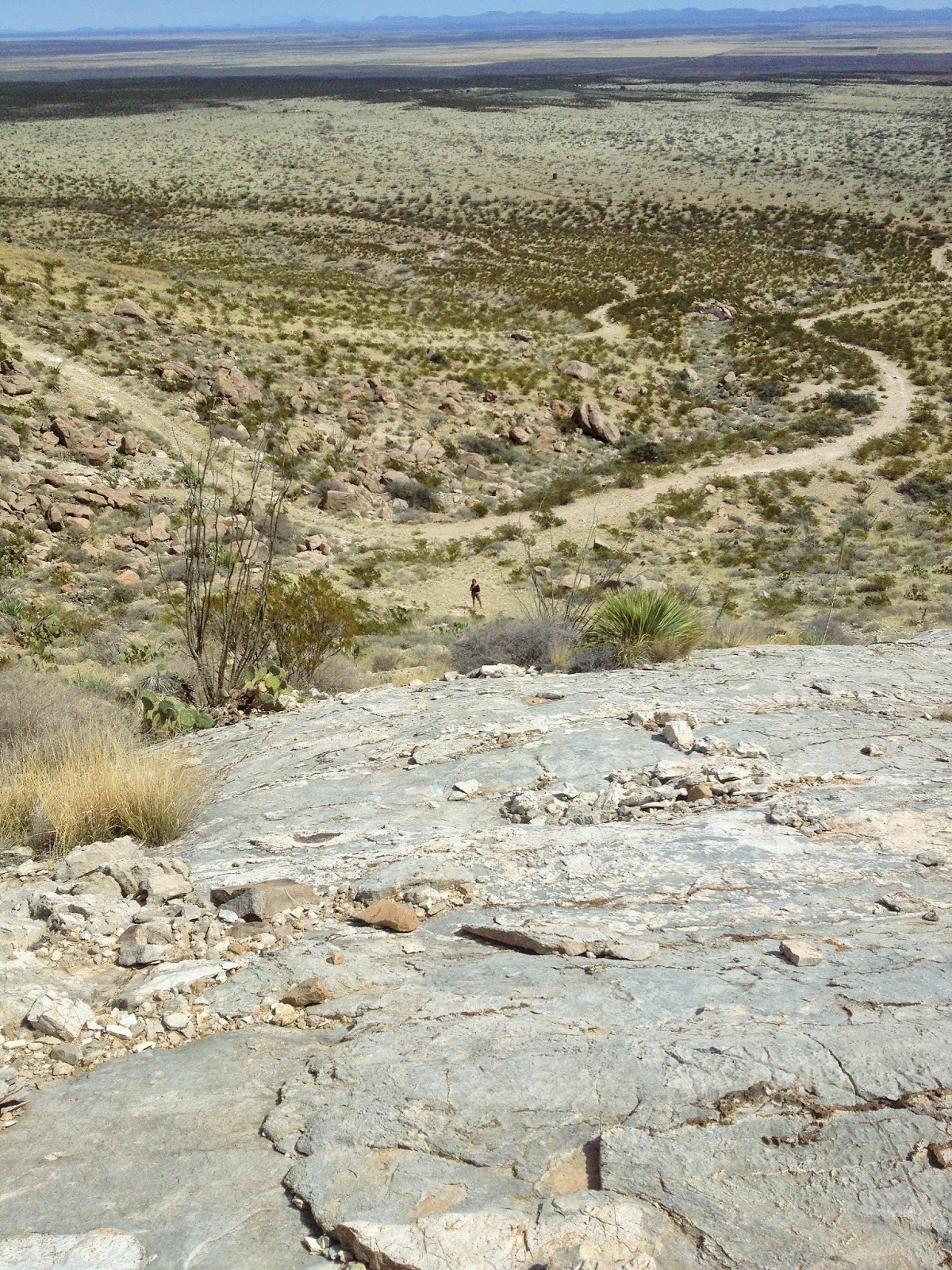 That's Glenda way down there at the bottom.
As it turns out, we didn't think there would be much to do while we were in Columbus, but we had a great time!  Meeting new friends, more good food and a great hike!
Posted by DebbieM