Bringing our New Rig back to CA


Normally one would like to have time to get used to a new truck AND trailer AND driving them both a little at a time.  That's how we had it planned, but as it turned out, we needed to be back to CA for our sons graduation from CSU Fresno on the 16th.  Initially we tried to break up the drive to be no more than 8 hours of driving each day.  But since we were behind a day due to the hitch issue, we really wanted to pick up our pace so that we would still have a couple of days in Arizona on the way back to visit friends and family.  So we thought we'd see how we feel, and if we felt like pressing on, we would and try to make up that lost travel day.

Our first day hitching up and heading out was in a horrible downpour.    We drove 450 mi, 8 hours.  We left Muskegon, Michigan, drove through Illinois, Indiana and ended up in St. Louis.

By time we got into Illinois, the rain had stopped and the drive was quite nice.  Indiana was also uneventful except for the fun time on the turnpike.  Good thing we had LOTS of quarters left over from the Laundromat as we didn't have a lot of change at the time.  It wasn't too bad.  We only made one mistake getting off and right back on which somehow cost us an extra $8.  Not sure how that happened.  We normally try to steer clear of toll roads.

In Indiana we came across more severe thunderstorm warnings.  The winds picked up but luckily for us we dodged the worst of it and sailed into St. Louis just in time for commute traffic on Friday.  We took a southern route and ended up missing it all.  Lucky again!  We got to see the skyline and the arch without all the traffic.  This is the best picture I could get. 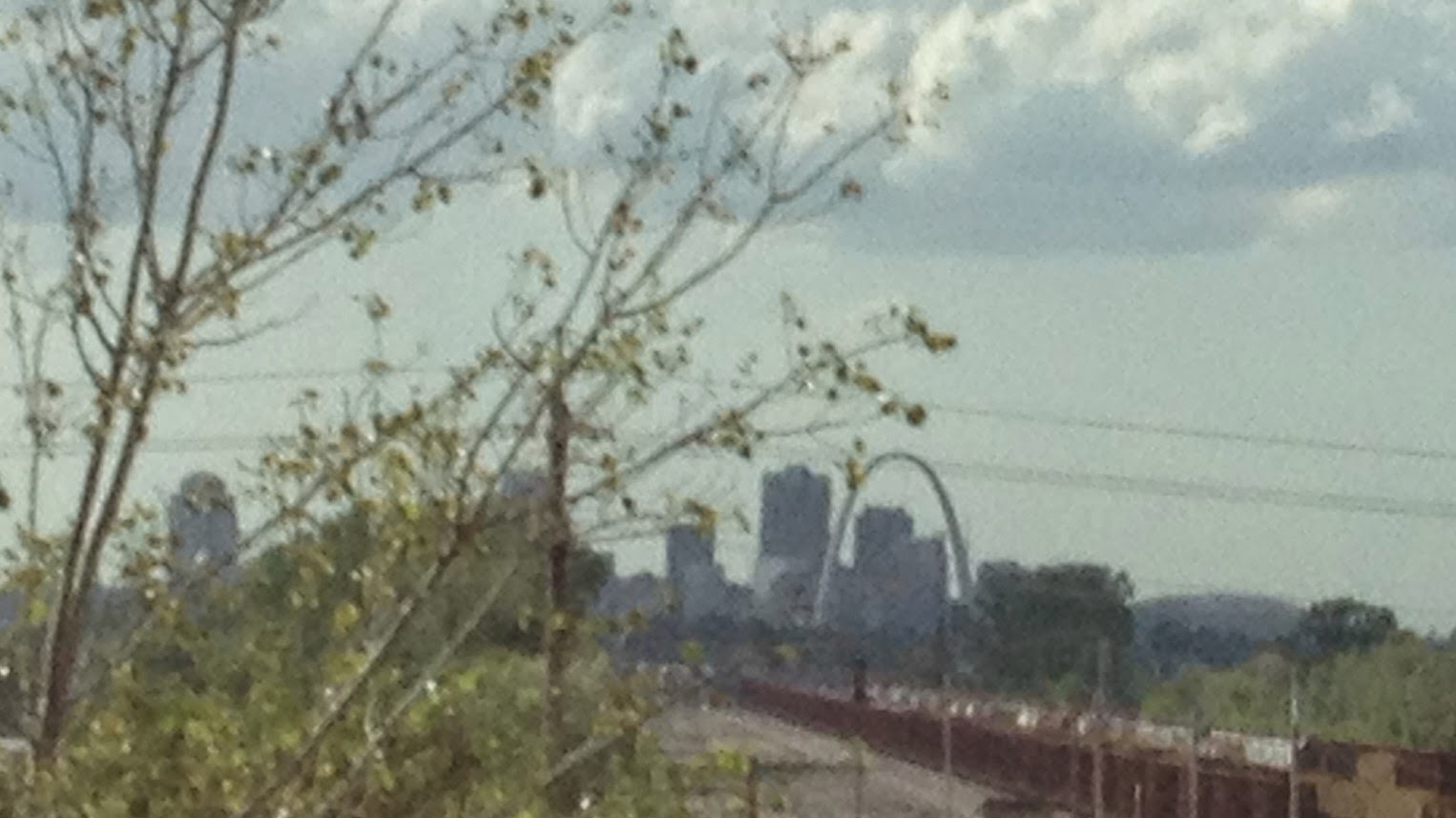 We were headed for a Wal-Mart for our first official "wallydocking".  This is RV talk for parking overnight at a Wal-Mart.  The same can be done at larger stores like Cabelas, Bass Pro Shop, Camping World, Costco and some other places.  With permission of course.  This works very well when you're arriving in the evening and just need a place to sleep and leaving in the morning. You want to be discreet and park at the far end of the lot.  We don't usually put out all the slides.  Luckily it was late and the heat had gone away and a nice breeze for sleeping came in.  On the way here, I thought we'd just eat at a McDonalds which was conveniently across the street.  When I mentioned this to Steve he said, "Are you kidding?!  We're in BBQ Country!".  I asked him if he really wanted to risk finding a place to park this beast just for BBQ.  Well my iPhone showed a great place at the next exit.  I had enough time to google map the area and amazingly there was a large pull off along the side road with a huge turn-around at the end.  Steve was in heaven!  Super Smokers BBQ. 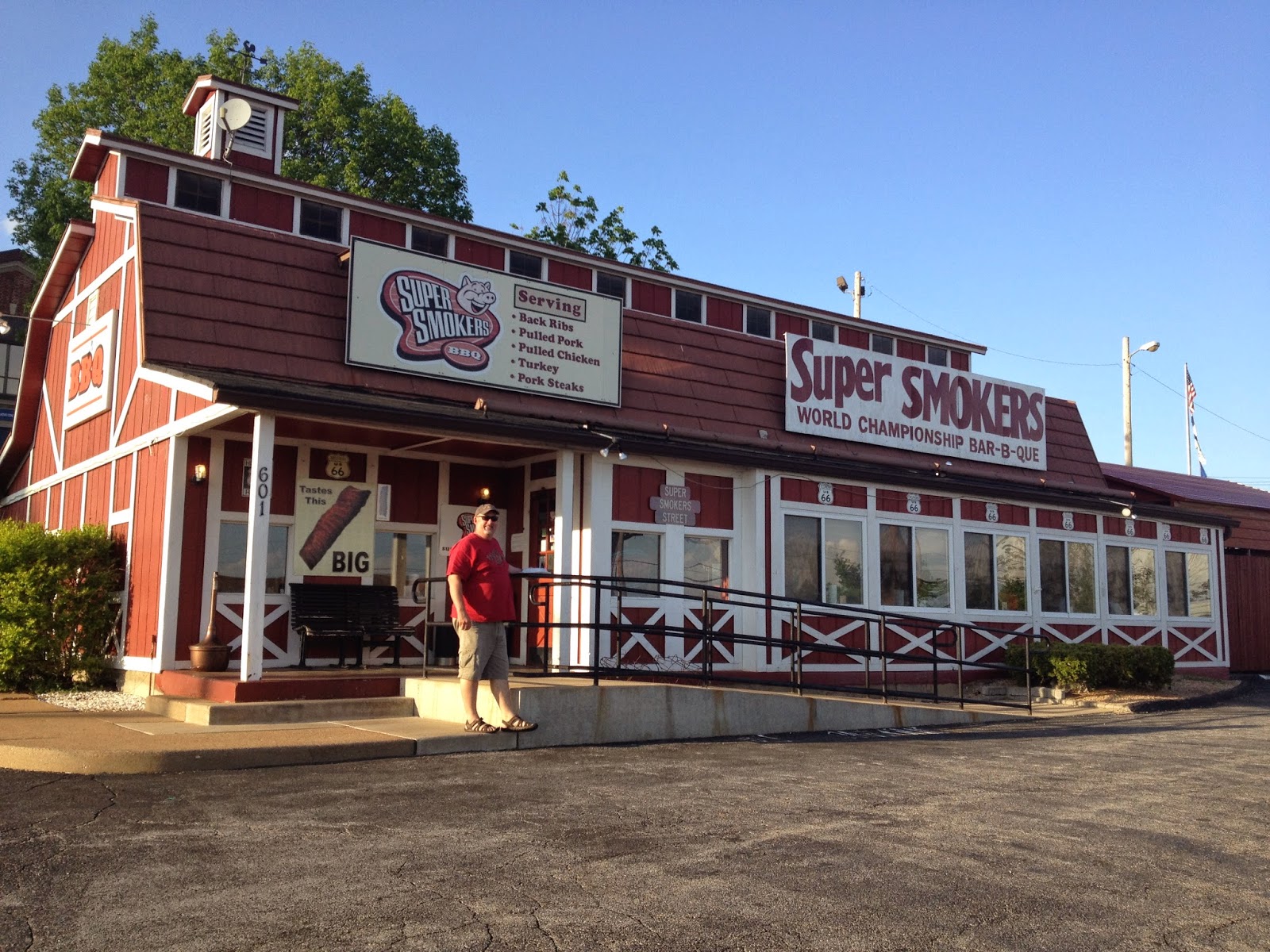 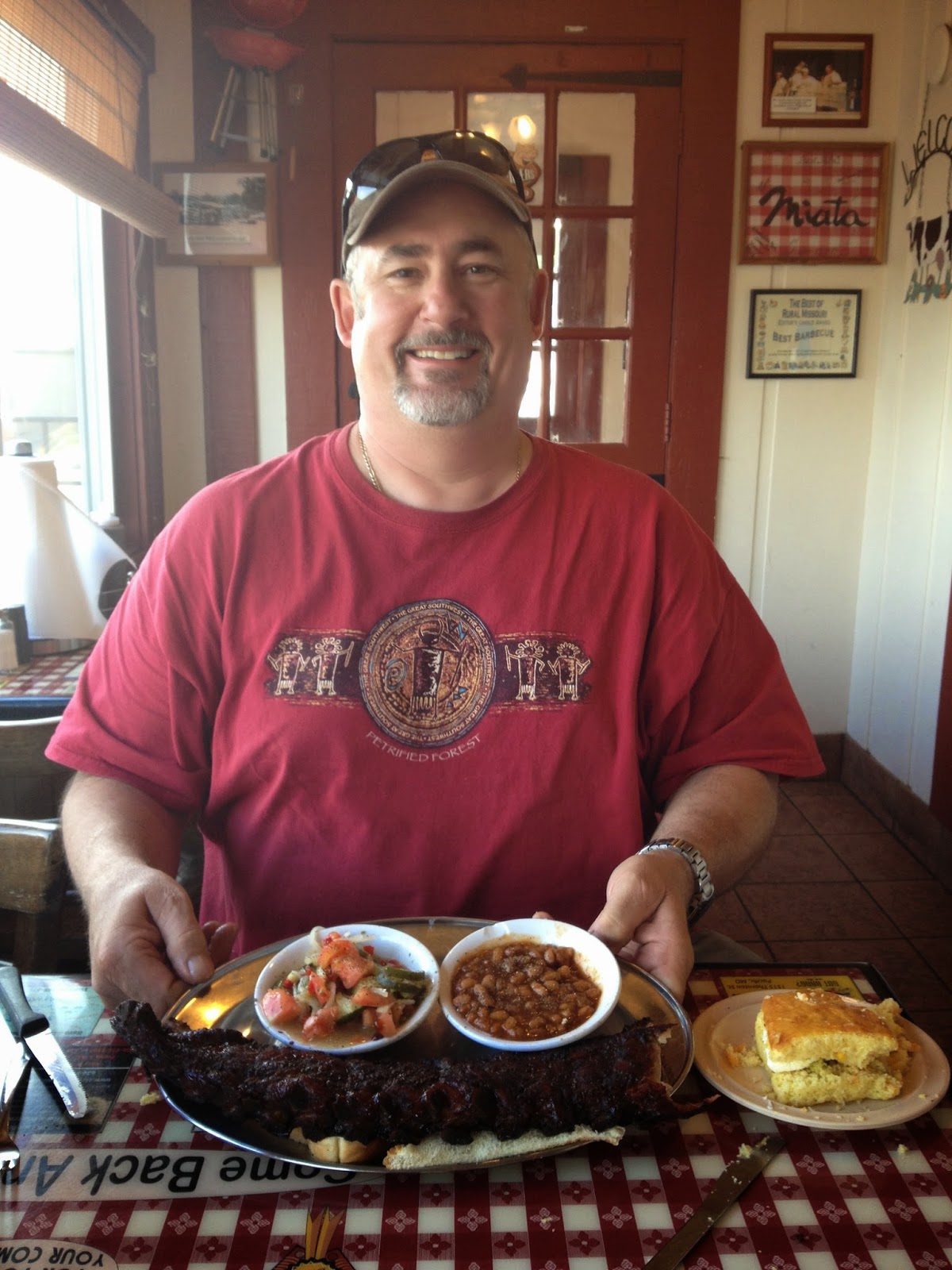 Steve also bought a couple of very small fans.  One runs on a 12v battery and was perfect to put on the shelf right next to me.  The other runs off a USB port which is at the foot of the bed on the dresser and is perfect to bring in the cooler air directly from the window.  Both of these are nice when you have no electric hookups.  The USB runs from our battery bank.  No generator needed.

After a nice meal and a good sleep, we got up early, had some granola with yogurt and some fresh fruit.  Grabbed a coffee and hit the road.  We drove through Missouri and into Oklahoma.  500 Miles and closer to 9+ hours of driving, we pulled into another Wal-Mart.  There were several other RVs here besides us.  It was an uneventful day of driving.  We've driven this route before 15 years ago when we moved from Upstate NY back to CA with 4 kids and 2 beagles in a very packed mini-van at Christmas time!  So this somehow seemed much easier.

This part of the drive through Oklahoma, 550 miles took closer to 10 hours.  If you haven't driven this part of I44 is quite boring once you get almost out of OK.  Fairly flat and not much to look at.  The winds picked up the more we drove.  The Texas panhandle is flat with not much going on.  There was an occasional patch of colorful wildflowers, but not much else.  The wind wasn't helping and was picking up quite a bit.  We were very impressed on how smooth the truck drives pulling the trailer even in the high wind.  The more we drove through New Mexico, the worse the winds got.  There was a high wind advisory all the way into Arizona for the next several days.  Another uneventful wallydocking and we went to bed early as we were getting restless with the driving and tomorrow was going to be the longest yet.  It really is nice to pull into Wal-Mart and not even have to unhitch.  Had a quick breakfast and a Starbucks and we were off to Phoenix!  Well, Surprise really where Steve's Dad and some really good friends of ours which live a bit north of there.

Only 460 miles to go!  This was the worst part of the driving so far.  It took more than 10 hours to drive with the horrible winds.  The headwind really killed the gas mileage.  Down to 5mpg.  Otherwise we do a surprising nice 11 mpg.  Seems like we were getting gas and  DEF constantly!  (I will do a write up on DEF on a later post.) The winds just got worse.  By the time we stopped for lunch we were starving!  Stops were few and far between after Albuquerque so we grabbed some lunch and gas.  We got sandblasted after stepping out of the truck.  By the time we crossed the street we had sand in our hair, mouth, ears, yuck!  We sure hoped the rig wasn't getting permanent damage.  Off we went and the sandstorms were all around us until we got to Winslow, Arizona.  The winds calmed a lot and the scenery was prettier. 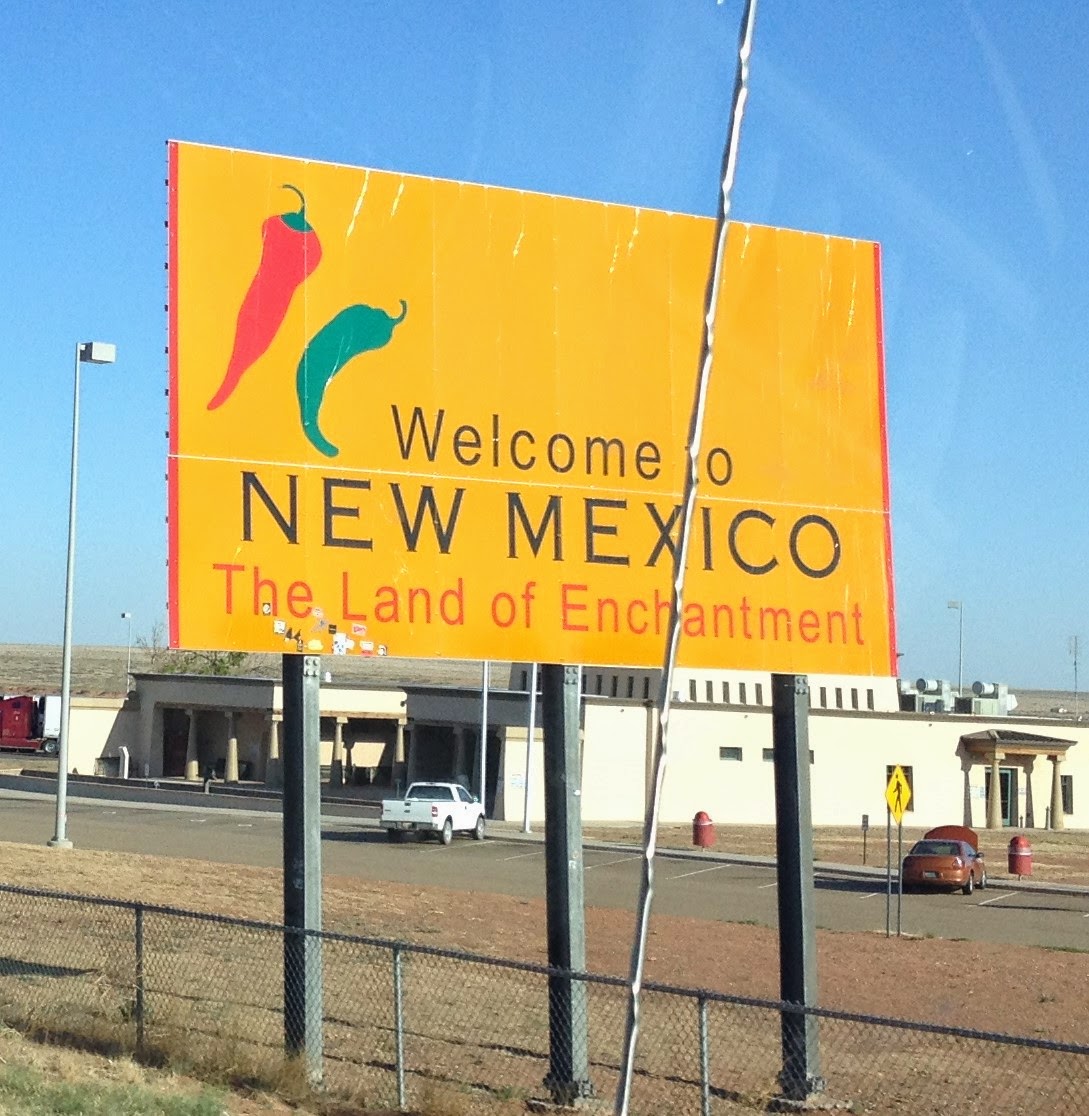 We stopped for more gas in Flagstaff and were happy to almost be at his Dad's where we would be "moochdocking".  You guessed it, this is where you mooch off your friends or family and park for free at their place :-) What wonderful family and friends we have!!  This would be the first time Steve had to back into a pretty tight spot, under a 13 ft canopy that we BARELY fit under!  It was a great 2 days in which we could relax a bit and not drive.  Had a great time catching up with family and visiting with our good friends Doug & Dotty and Dotty's Mom.  They were nice enough to drive all the way down to Surprise from Wilhoit to visit with us. 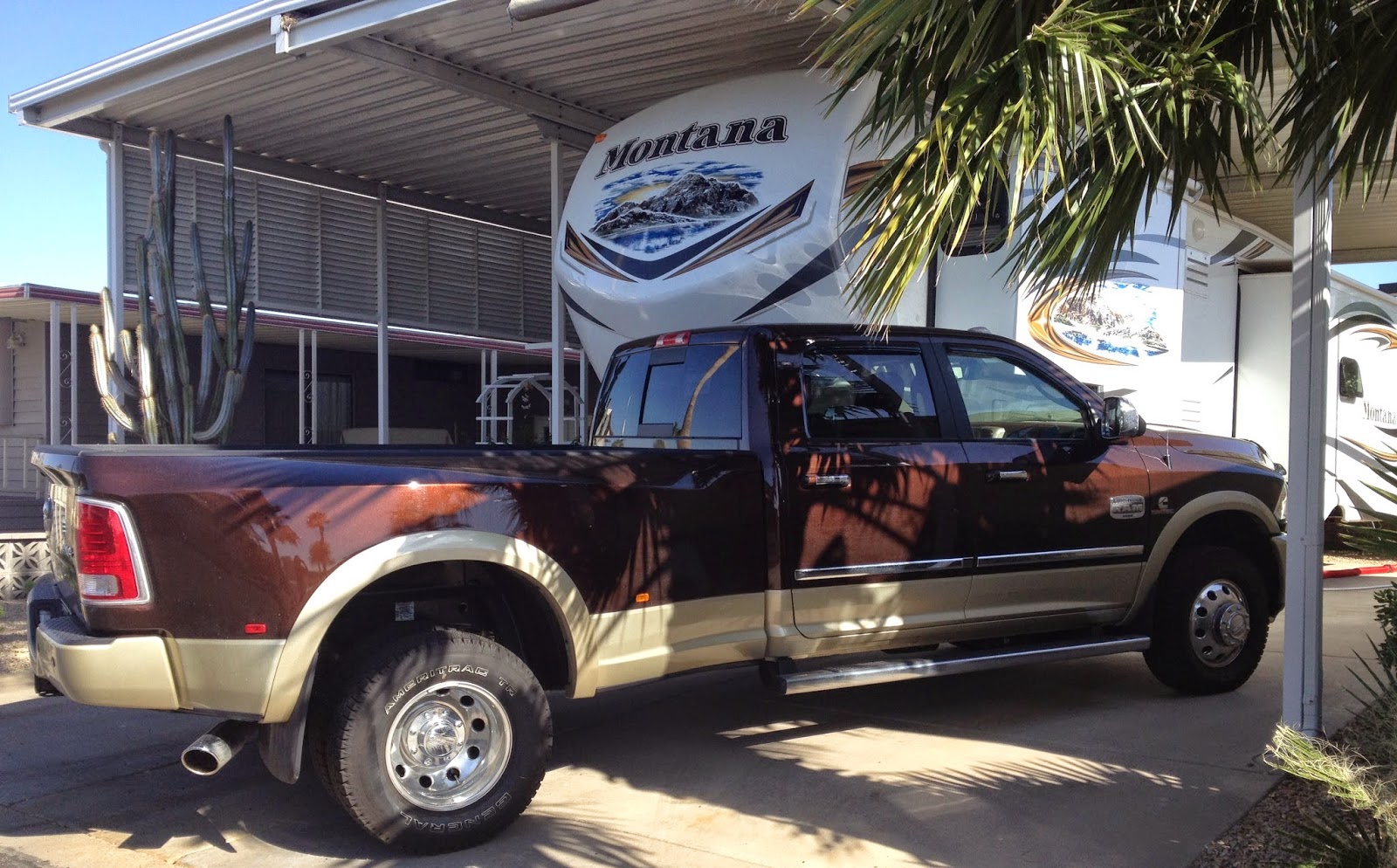 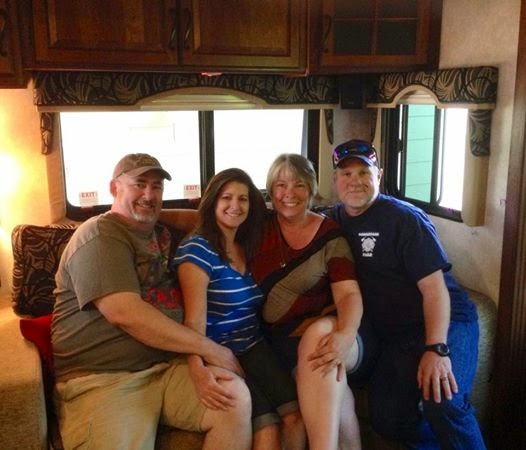 Wednesday
After I washed the truck, what a job that was, we headed out for Fresno.  Yet another WalMart stay in Bakersfield.  It was late once we went up and around LA.  Strangely, traffic was very light.  Truck and trailer did beautifully on the grapevine and we made good time into Bakersfield.
Thursday
I didn't get a picture, but we pulled in to Blackstone North RV Park not far from the Fresno State campus.  It was a really nice little park that was very clean and quiet with lots of shade trees.  Perfect for our situation.  Normally, we are not the private RV park types.  We much prefer the settings of State Parks and boondocking.  More privacy, less people and usually on or very near a beautiful lake, river, etc.  We would recommend this park when you need a 1 or 2 night stop over.
Friday
Our 3rd youngest son graduated from California State University Fresno with a Psychology degree.  He works with  Autistic children.  Most of our family was there.  We had a great dinner at the Outback Steakhouse and then we headed home the next day. 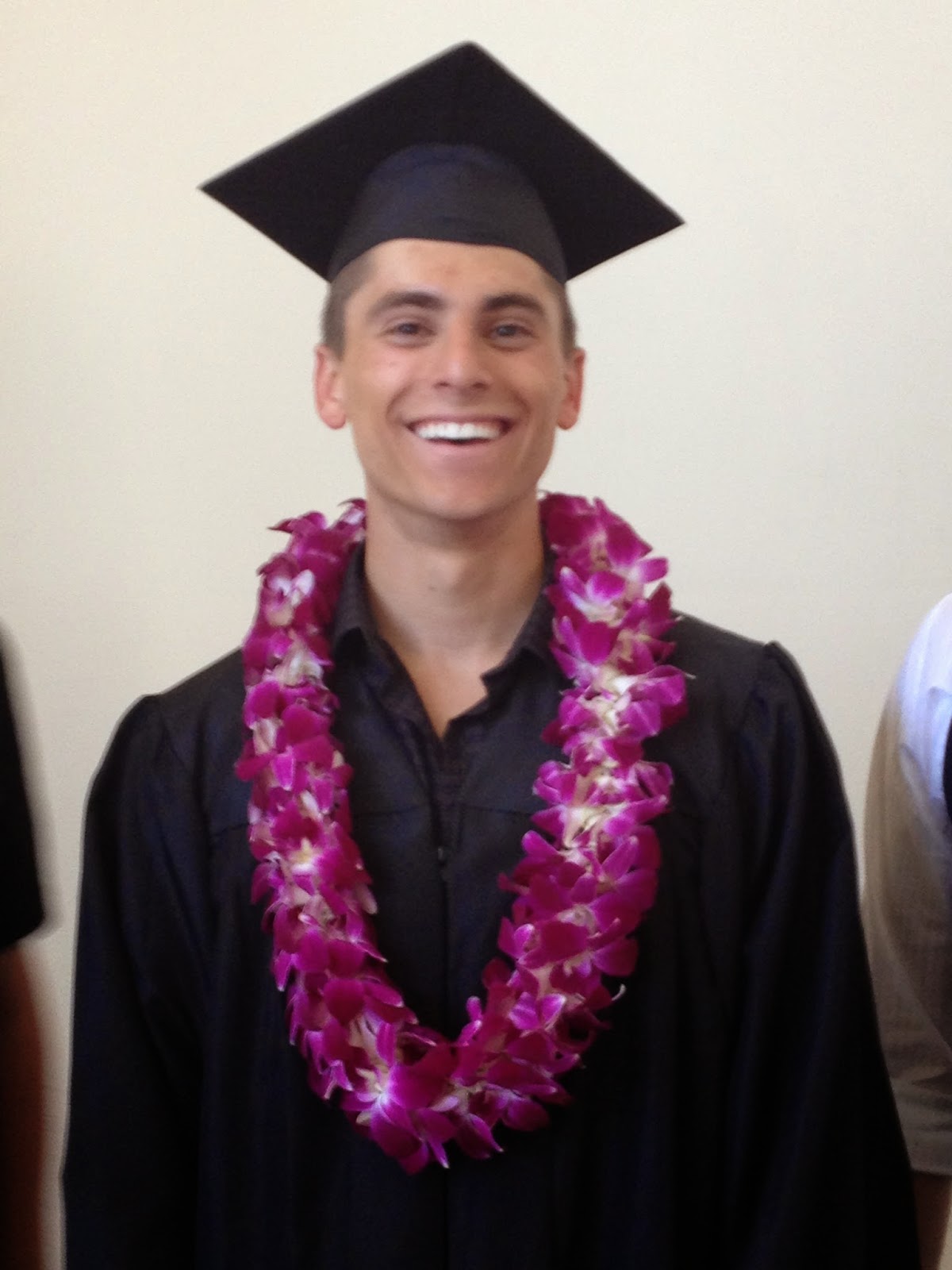 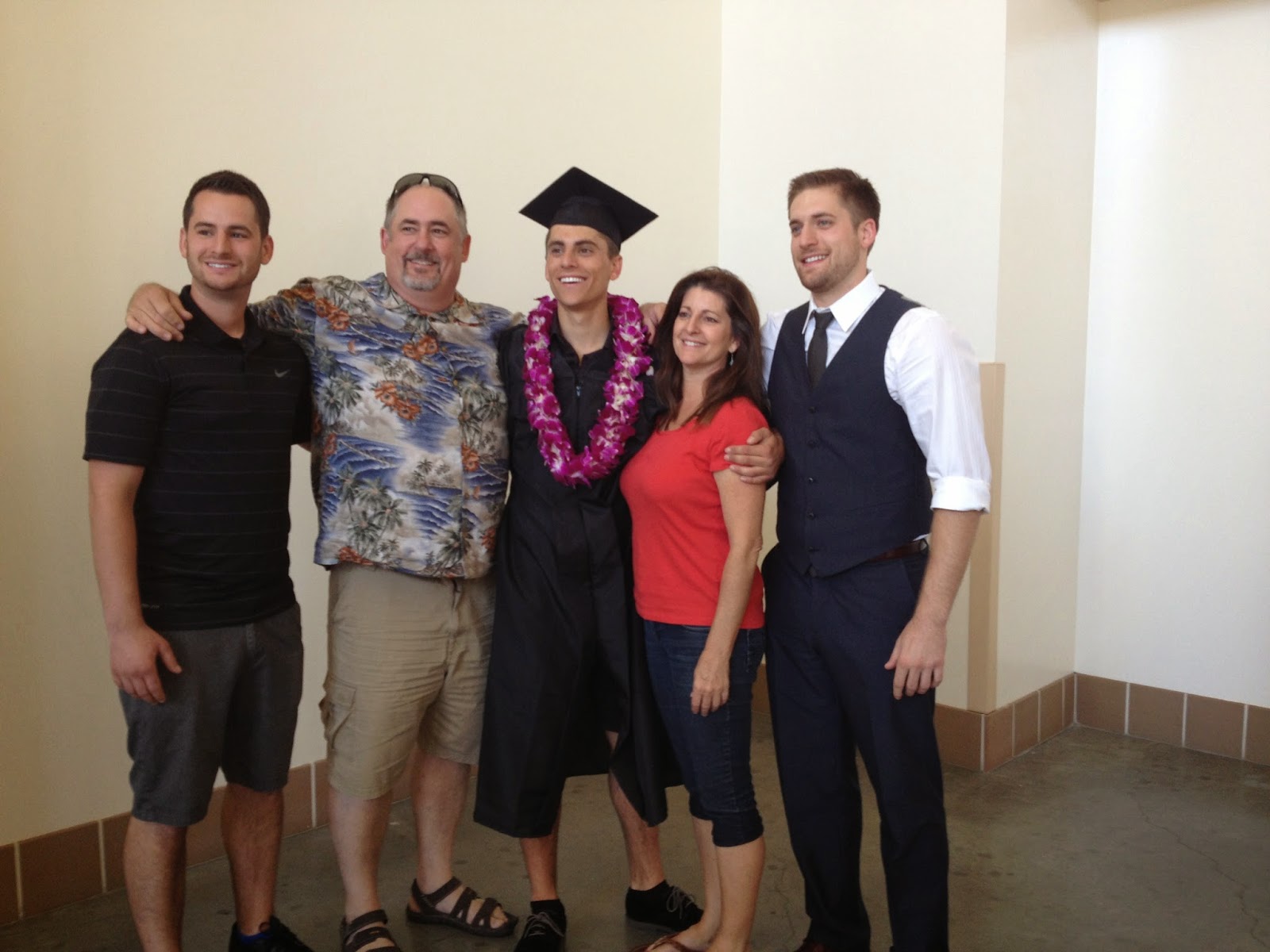 We were able to get down/up our steep dirt roads and able to back it into a spot at the bottom of the property where we can get power from our barn.  Not too shabby! 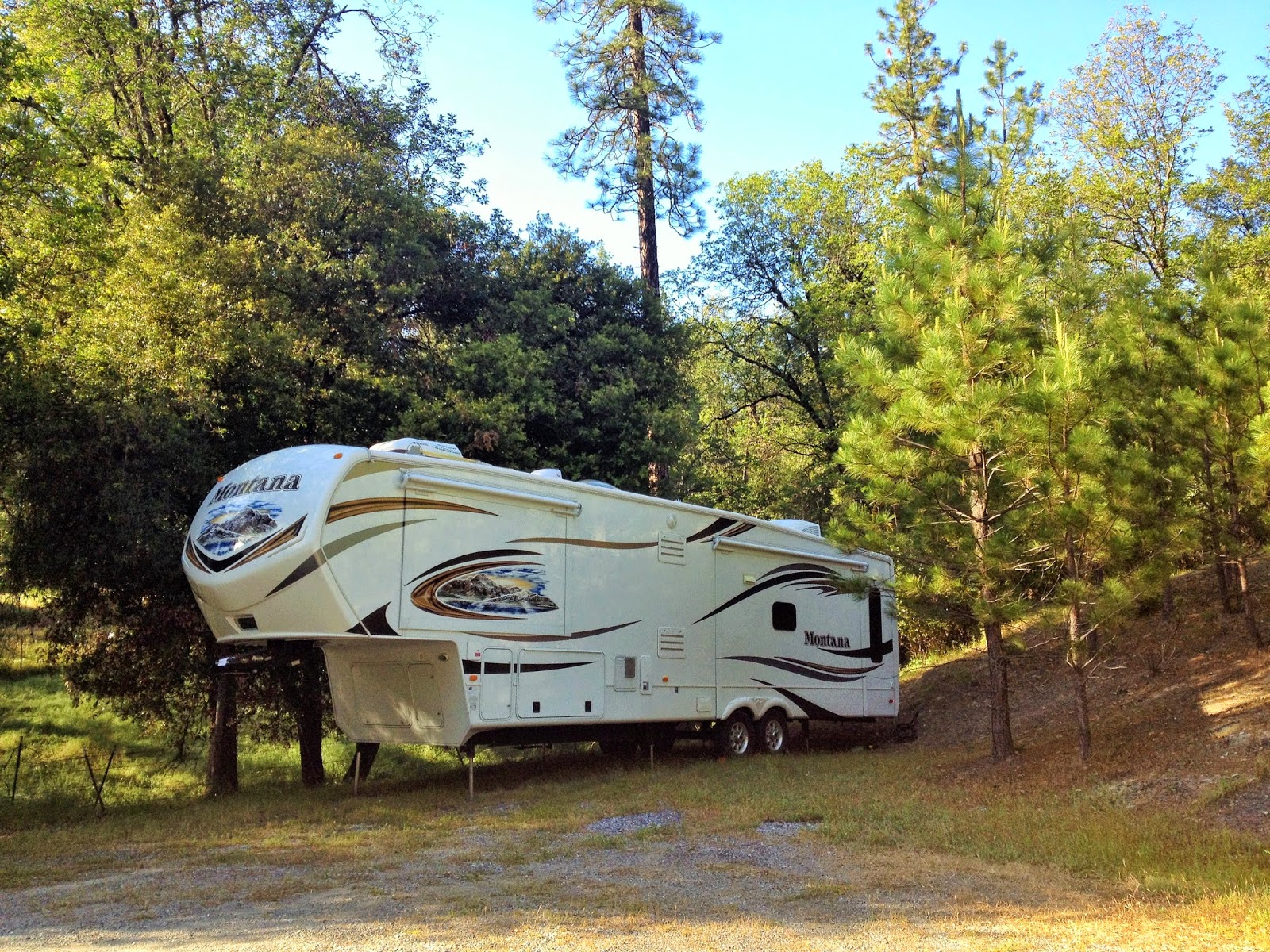 WHEW!!  It was a crazy but fantastic 3 weeks!